February 8 marks the beginning of the official campaign period for aspirants vying for national posts in the May 2022 elections.

Approximately 4,000 supporters and political allies of the Lacson-Sotto tandem converged at the Imus Grandstand to join the senators in their proclamation event.

For his part, Sotto asked for the public’s trust.

(We see that the budget of the government does not trickle down. We told ourselves, instead of retiring, why not implement the budget ourselves.)

Before this, the two attended a Mass at the Imus Cathedral with their families. 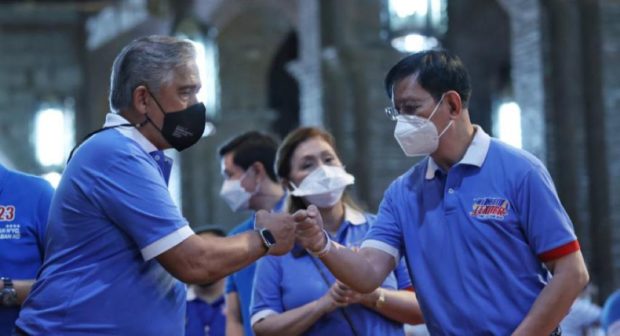 Partido Reporma standard-bearer Panfilo ‘Ping’ Lacson (right) and running mate Senate President Vicente ‘Tito’ Sotto III (left) pump their fists as a gesture of faith and confidence with each other as they take their respective political careers to even greater heights this 2022 elections. Contributed photo

Re-electionist Senator Richard Gordon and former Senators Loren Legarda and Francis “Chiz” Escudero, who are also part of the Lacson-Sotto tandem’s slate, were not able to attend the proclamation rally physically but sent video messages instead to convey their campaign platforms.

The Lacson-Sotto tandem, who has a combined 83 years in public service, is backed by three political parties in the country: Partido Reforma, chaired by Lacson; the Nationalist People’s Coalition chaired by Sotto; and the National Unity Party headed by their campaign manager, former Interior Secretary Ronaldo Puno.

They are running on a platform of “fixing the ills” of the government and cracking down on “thieves” among public officials.

The two are also pushing for budget reform in order to bring resources to the local governments so they can implement their development project. 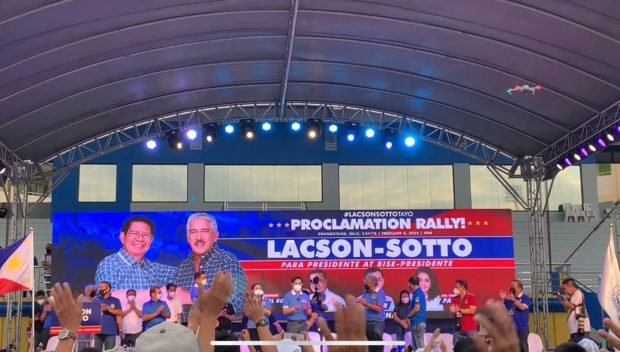 Lacson-Sotto tandem kicks off their 2022 campaign at the Imus Grandstand in Cavite on Tuesday, February 8, 2022. INQUIRER.net Christia Ramos

Under Lacson’s proposed Budget Reform Advocacy for Village Empowerment (Brave) program, the unused portion of the national budget, which averaged P328.85 billion in the last 10 years, could be channeled for use by local governments.

For his part, Sotto said that should their tandem win in the upcoming polls, he plans to handle the government’s anti-drug campaign. Sotto spent 31 years advocating against illegal drugs and drug abuse in the country. More than 10 years ago, he chaired the Dangerous Drugs Board.