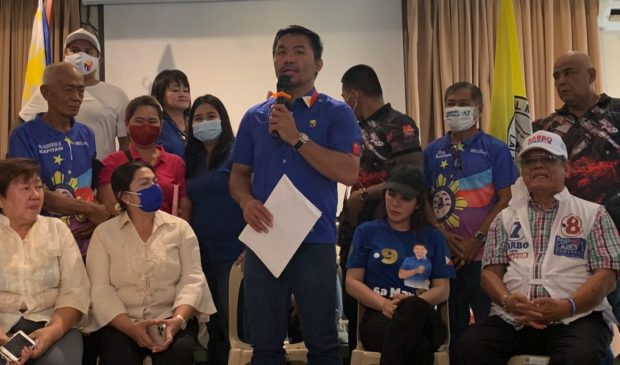 He first conducted a motorcade across GMA then paid a courtesy call on local officials, including Mayor Maricel Torres, in the municipal hall.

Presidential candidate Manny Pacquiao brings his campaign to vote-rich Cavite province. He will first have a motorcade across General Mariano Alvarez before paying a courtesy visit to Mayor Maricel Torres. @inquirerdotnet pic.twitter.com/NTpJMcYL11

Pacquiao meets with local officials in GMA, Cavite and tells them his vow to fight corruption should he win in the May 9 polls. He likewise vows to implement his housing program within the first year of his administration. @inquirerdotnet pic.twitter.com/uFcYXEy6rC

During his meeting with the local executives, Pacquiao said he is intentionally not holding grand rallies, unlike other presidential bets, because he wants to reach out directly to the communities to disclose his plans and programs if he wins the presidential race.

(We are not setting up big stages and calling people to attend because that’s too much trouble for them. I am personally going to small and poor areas.)

(That’s where we’re going because they are not often visited. We are prioritizing the poor communities. I want to champion the poor.)

Pacquiao says he is not holding grand rallies for his campaign but instead chooses to directly go down to communities and municipals to bare his plans and programs. @inquirerdotnet

In response, Mayor Torres said they are glad that Pacquiao visited their town and she wished for the success of the boxer-turned-politician in his latest political fight.

(We are happy that we are given importance. We are praying that our upcoming fight would be successful.)

From GMA, Pacquiao held a motorcade across Dasmariñas and then proceeded to the new municipal hall of Silang town where he spoke before residents. There are about 136,000 registered voters in Silang.

Pacquiao is now here at the Silang Municipal Hall. He is accompanied by Senate bet ex-Eastern Samar governor Lutz Barbo. They were met with warm welcome by local officials and residents. @inquirerdotnet pic.twitter.com/UqaCBwEYp7

Pacquiao then visited the Mahogany Market in Tagaytay City where he was met with a crowd.

Pacquiao is met with a crowd in his visit to Mahogany Market. @inquirerdotnet pic.twitter.com/KNrys0vuok

From Tagaytay, which has more than 91,000 registered voters Pacquiao graced the program of the Philippine Councilors League-Quezon Chapter.

In his speech, Pacquiao said he is pushing for local autonomy.