Poe sees ‘swift passage’ of bill on motorcycles for hire 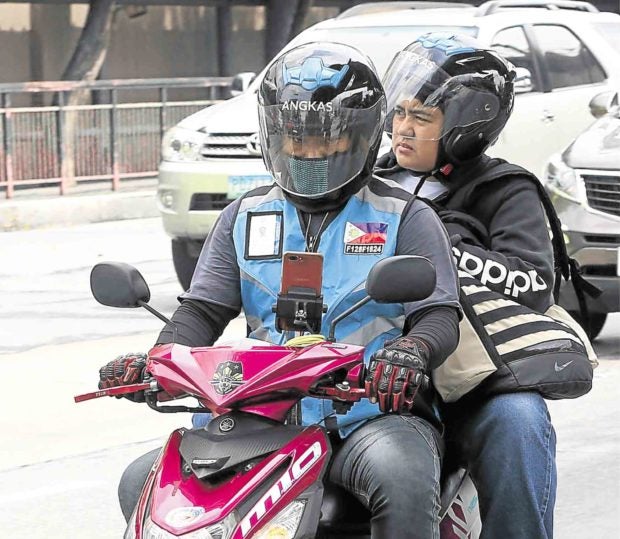 The bill aims to regulate the use of motorcycles for hire as a safe alternative mode of public transport. (File photo by NIÑO JESUS ORBETA / Philippine Daily Inquirer)

MANILA, Philippines — Sen. Grace Poe sees the “swift passage” of a bill regulating the use of motorcycles for hire for public transport before the 18th Congress ends.

Poe, chairperson of the Senate public services committee, has committed herself to push the bill for consideration at the Senate once its session resumes.

Congress is currently on break and will resume sessions starting on May 23 and ending on June 3.

“Our version of the Motorcycles-for-Hire bill (SB 1341) received unanimous support on the Senate floor when it was sponsored so we can reasonably expect swift passage,” Poe told INQUIRER.net in a text message on Tuesday.

“We just need to reconcile the versions of the two chambers as these happen to be drastically different bills,” she added.

That was her answer when asked regarding a Feb. 14 letter addressed to her by Rep. Edgar Sarmiento, who chairs the transport committee in the House of Representatives.

Sarmiento called for the urgent passage of the proposed Motorcycles-for-Hire Act. The House version of the measure was approved on third and final reading in January this year.

The bill aims to provide a safe, sufficient, and economical alternative mode of public transport by allowing and regulating the use of motorcycles for hire.

Sarmiento also called for the Senate’s immediate approval of the proposed Maritime Safety, Security and Prevention of Ship-Sourced Pollution Act of the Philippines, the counterpart measure of which has also been approved on third and final reading in the House in January.

Poe likewise committed herself to pushing the bill for the consideration of the Senate.

The bill is still pending at the committee level, according to the Senate website.

“The proposed International Maritime Instruments Domestication Act (HB 10162) was just recently passed and transmitted to us right before the break so this will have to be heard first before this goes to the floor for the consideration of the other Senators,” Poe said.

“Since it is a joint referral with the Committee on Foreign Relations, it would probably merit a more thorough discussion,” she added.