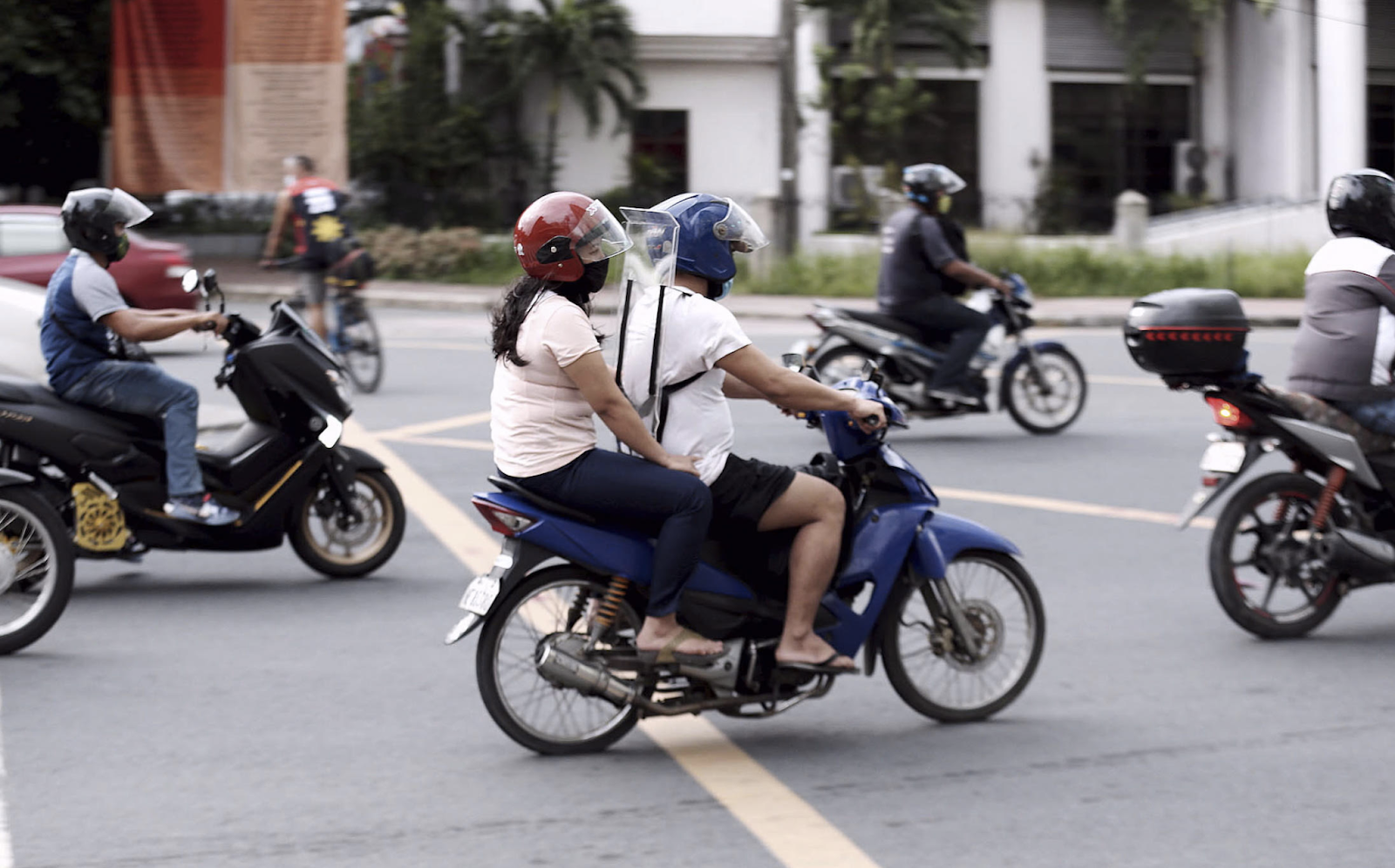 FILE PHOTO: Sen. Richard Gordon decries the steep interest rates imposed on installment payment for motorcycles by ordinary Filipinos. He says some unscrupulous dealers charge up to 36 percent interest on monthly amortization and, in lieu of official receipts and certificates of registration, they make buyers sign a promissory note indicating they are paying for the motorcycles they are driving. RICHARD A. REYES / PHILIPPINE DAILY INQUIRER

MANILA, Philippines—It was in 2020 when the Philippines imposed lockdowns to prevent a rise in COVID-19 cases which helped clear the notoriously congested roads of Metro Manila.

But as the Philippines started to ease COVID restrictions on March 1, the metropolis—with a 43 percent congestion level in 2021 according to a study by TomTom International B.V.—saw its pre-pandemic public transport problems turning red again like festering wounds.

The 43 percent congestion level in Metro Manila means that a 30-minute travel would take 13 minutes more, especially for 70 percent of Filipinos who rely on public transportation.

The navigation program Waze said in 2019 that on the average, it would take 4.88 minutes for someone to travel one kilometer by car in Manila. It said it’s the “worst” in the world. 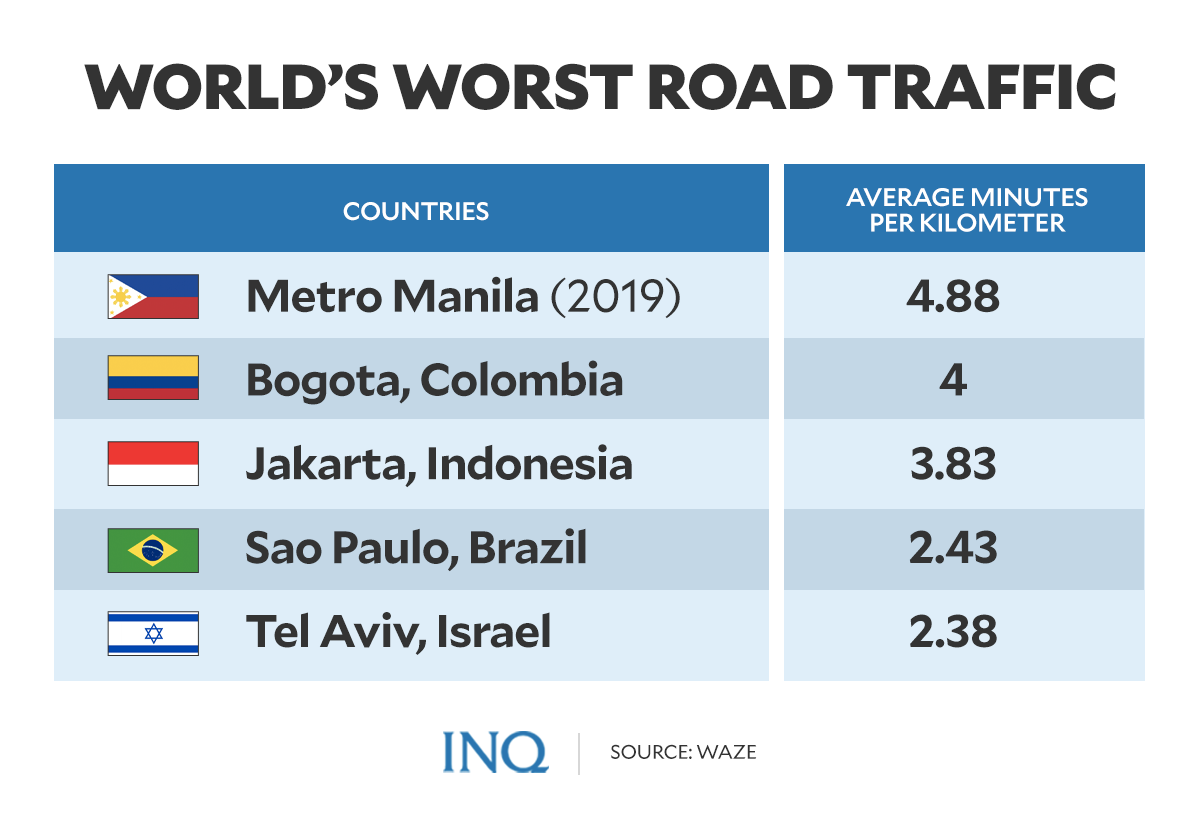 As the congestion brought inconvenience, the Center for Complexity and Emerging Technologies (CCET) of De La Salle University said that people in Metro Manila had to take the alternative––trains.

However, while the Metro Rail Transit-3 was designed to serve only 300,000 passengers every day, it currently serves 500,000. This, the CCET said, has resulted in long waiting lines and “disgruntled” passengers.

This was the reason that the demand for motorcycles emerged in the Philippines. As stressed by HubPages, motorcycles are more efficient and cost-effective. 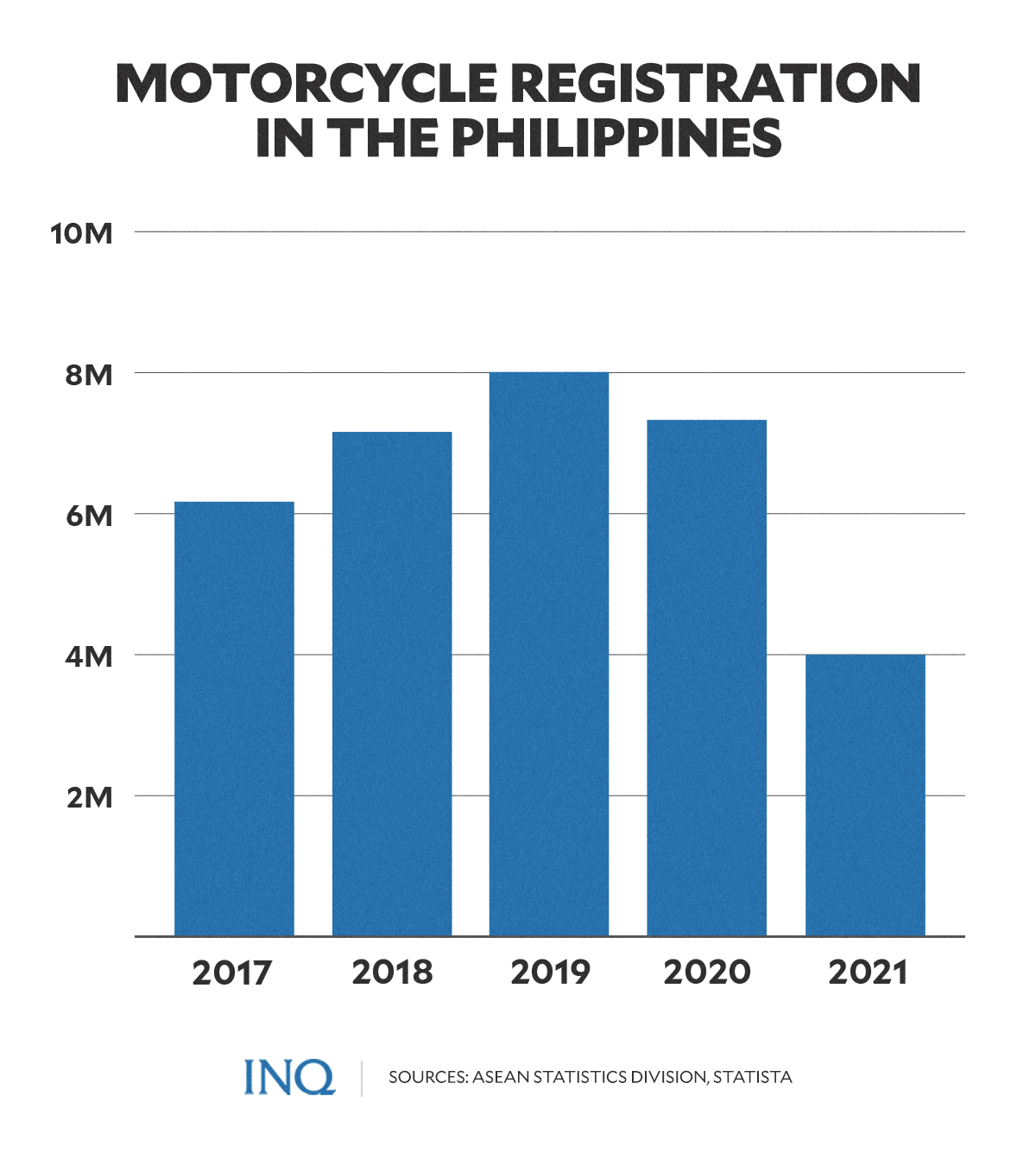 For Charles Punsalang, one of the officials of Citimuber PH, motorcycles are significant, especially when it is legally recognized as a mode of public transportation.

“This will greatly help every Filipino because first, when one needs to get to his or her destination immediately, like when you need to get to work, motorcycles can lessen travel time,” he told INQUIRER.net. 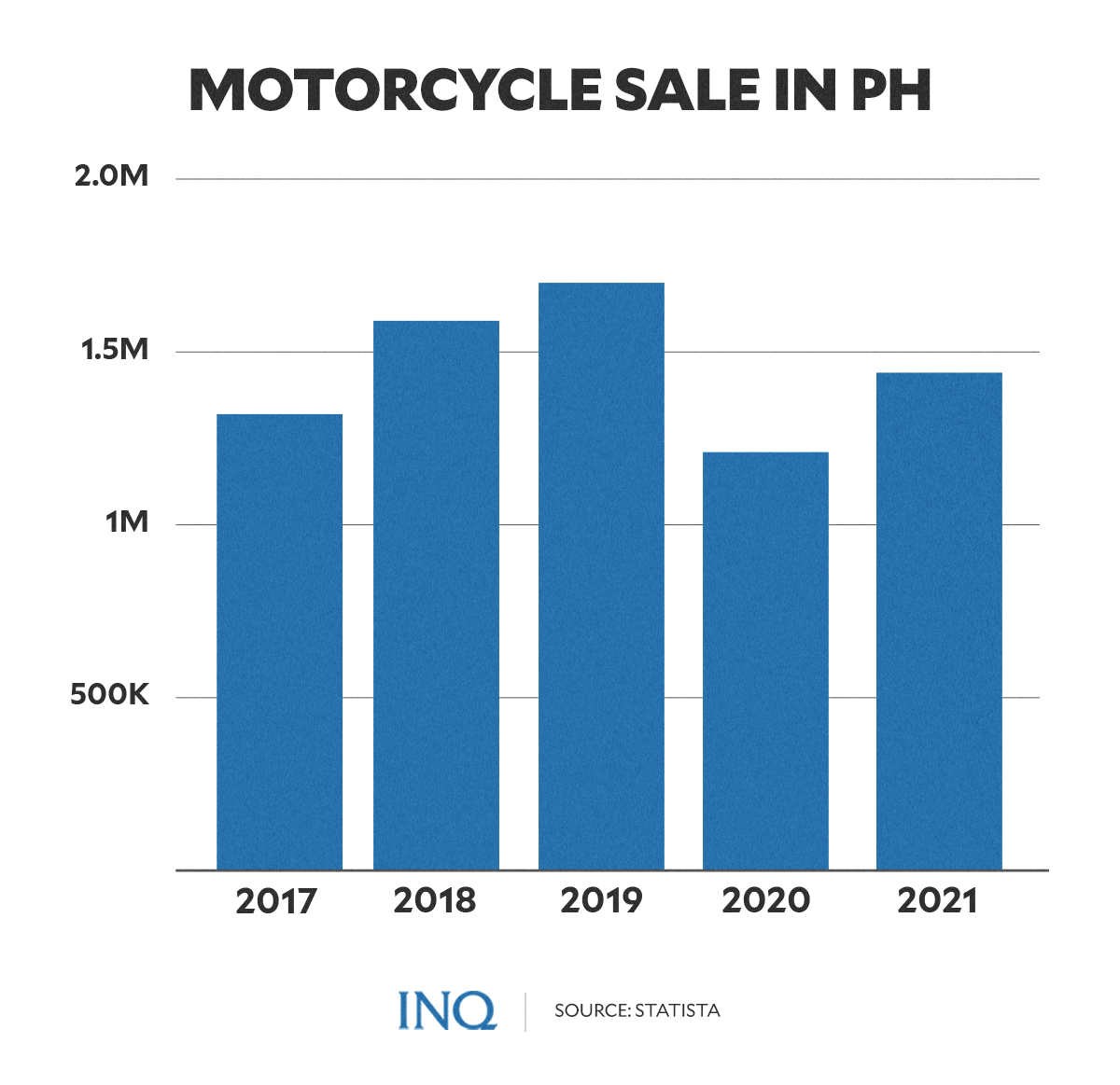 The essence of motorcycle taxis was clearly indicated in 18 House bills, which were consolidated as House Bill (HB) No. 10571 to seek their legalization.

However, three years since the Department of Transportation (DOTr) set the pilot run of motorcycle taxis in Metro Manila, the law, which Punsalang said is really significant, is still pending.

INQUIRER.net took a closer look at why HB No. 10571 and Senate Bill (SB) No. 1341, which seek to legalize two-wheeled taxis through the proposed Motorcycles-for-Hire Act, have not become law yet.

The 17th Congress discussed bills which wanted to amend the Land Transportation and Traffic Code. The House of Representatives, with a 181-0-0 vote, passed HB No. 8959 on final reading on Feb. 4, 2019. 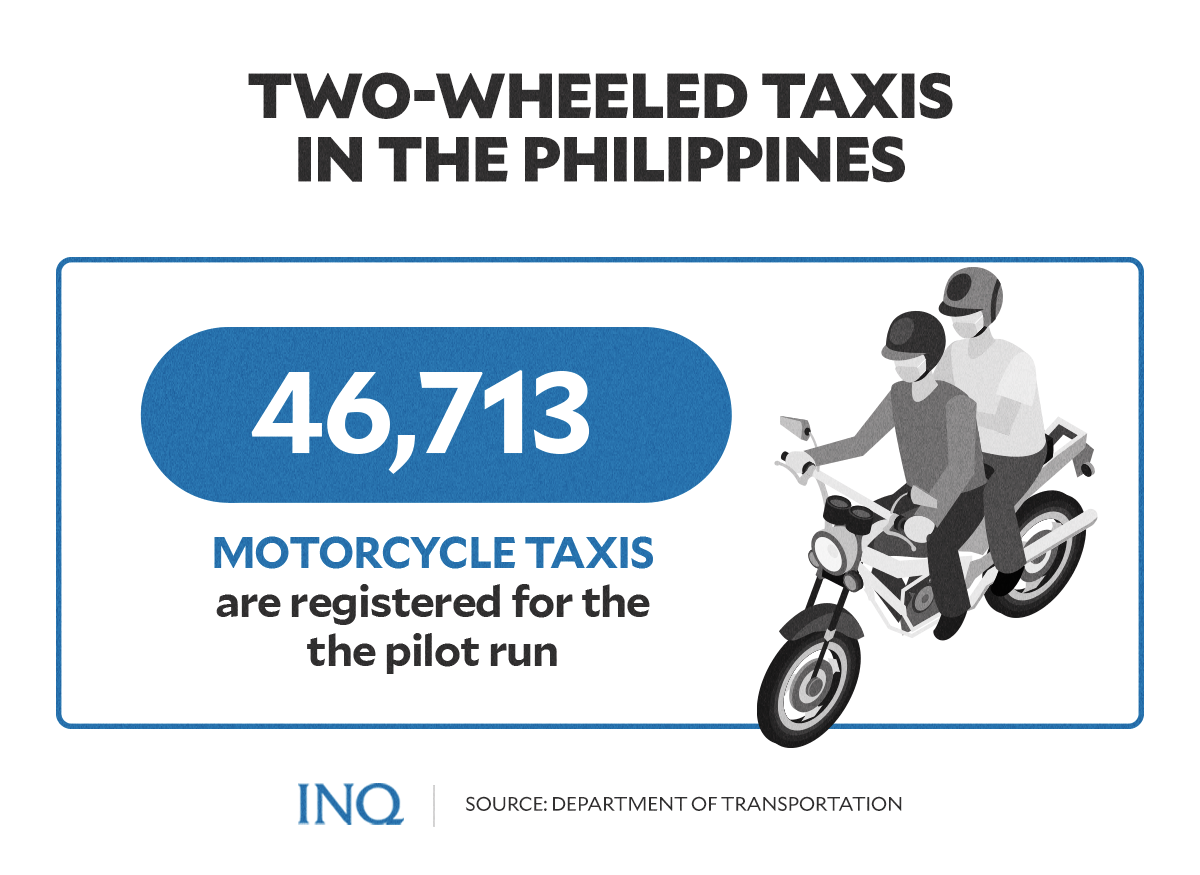 There’s a need to amend Republic Act 4136—or the Land Transportation and Traffic Code—which took effect on June 20, 1964, since it limits PUVs to four-wheeled vehicles.

It was in late 2018 when Transportation Secretary Arthur Tugade ordered the creation of a technical working group (TWG) to review the viability of having two-wheeled vehicles as a mode of public transportation.

He said that while the DOTr understands why Filipinos like motorcycle taxis, “we should remember that there is a law against this and the Supreme Court has issued a TRO. The law is the law, and the executive will not be the first to break it.”

“But we at the DOTr know how to listen. So even if the Supreme Court has yet to issue a final ruling, we are already forming a TWG to study the prospect of motorcycles serving as public transportation,” he said.

The DOTr, on May 10, 2019, licensed the six-month “pilot run” of two-wheeled taxis in Metro Manila and Cebu while reminding them to strictly follow the safety requirements:

It said riders should only render 10 hours of service every day and accident insurance should be provided, which is the same or higher than the Passenger Personal Accident Insurance Program for PUVs.

The fare for two-wheeled vehicles then is P50 for the first two kilometers, an additional P10 for every kilometer until the seventh, additional P15 for the succeeding and a surge rate cap of 1.5x in Metro Manila.

The pilot run, which ceased in March 2020 because of the COVID-19 crisis, was continued on Nov. 23, 2020 as the three leading two-wheeled taxi companies complied with the needs set by the government.

‘Done with the work’

Samar Rep. Edgar Sarmiento, who is the chairman of the Committee on Transportation, told INQUIRER.net that “we did not want to pass a law that was not thoroughly reviewed.”

“That’s why we looked at the report of the TWG––the safety of the motorcycle, the issues, the platform that could be used, the transport network companies, the investment of the drivers,” he said.

He stressed, “We can really see the significance of motorcycle taxis. We really lack mass public conveyance. This is something out of the box. It started specifically in Thailand and Indonesia.”

Sarmiento said HB No. 10571, which is a consolidation of 18 bills in the House of Representatives, was passed two years ago: “We had a meeting with the DOTr and we resolved all issues then.” 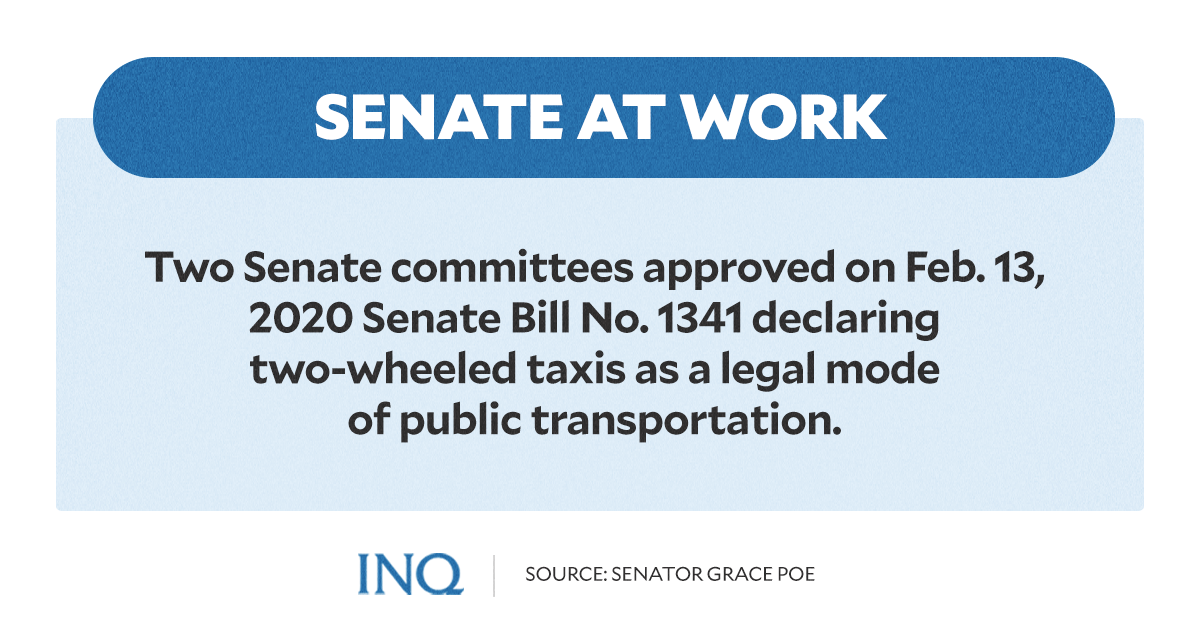 “Two years later, we received all the inputs and there was a TWG, this time by the House of Representatives, and was chaired by Rep. John Tiangco,” Sarmiento, who explained the bill to the plenary session, said. 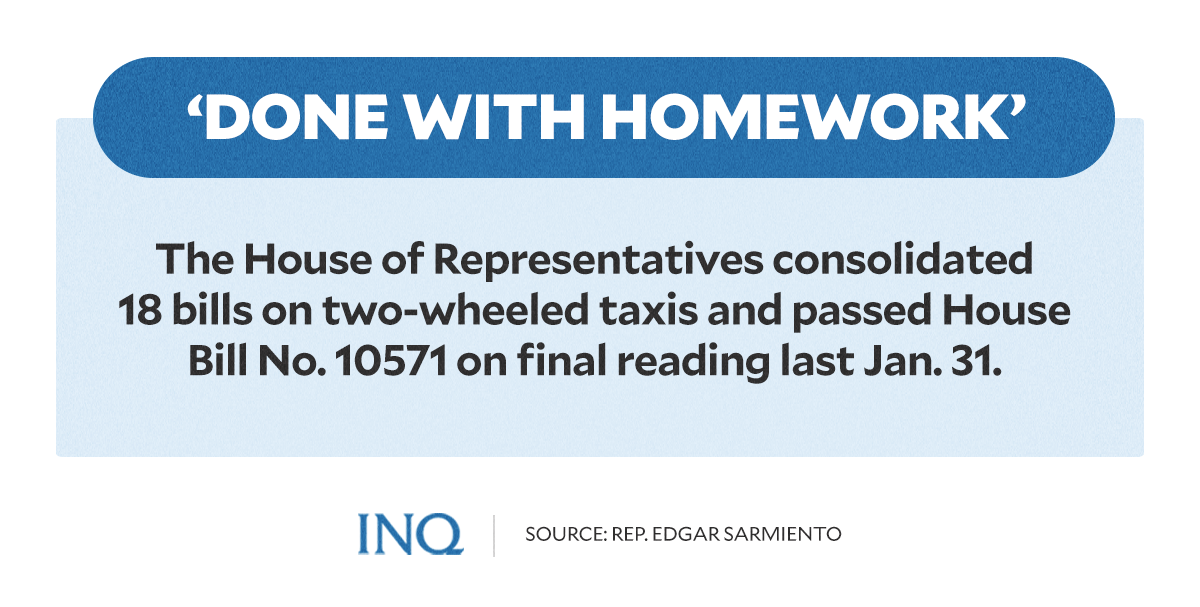 The bill said, even with the promise of convenience and fast service of two-wheeled taxis, it should be regulated to make certain that the interest of the general public is protected.

“Thus, the State shall allow the regulated operation of motorcycles-for-hire to provide the public with an alternative mode of public transportation that is sufficient, safe, secure and economical,” the House bill said.

Sarmiento said while legislators really wanted the law to take effect immediately, “we did not want to commit any mistake.” He stressed that they wanted to review the platform, the business, and the online e-commerce platform provider (OEPP).

He said the law will not only involve passengers as it will likewise apply to delivery services. He said, however, that the two-wheeled taxi is only a short-gap solution: “We should go back to the efficiency of a mass public transportation system.”

Punsalang said two-wheeled taxis should really be legalized so that all ride-hailing companies will always be reminded of the standards. Having a law likewise indicates responsibility, he stressed.

HB No. 10571 said a two-wheeled vehicle intended to be used as a motorcycle-for-hire should be registered with the Land Transportation Authority, which will make certain the roadworthiness of all motorcycles-for-hire.

The franchising of these in metropolitan and urbanized areas with an existing and operating transportation network companies (TNC) or OEPP is vested in the Land Transportation Franchising and Regulatory Board (LTFRB).

In places where there are no existing or operating TNC or OEPP, the application for a franchise shall be coursed through the LGU where the motorcycle-for-hire intends to operate. It may only operate within the LGU.

In case of accidents, the operator and the TNC or OEPP providing the digital platform shall be jointly and solely liable, with rights of subrogation against any party at fault: Provided, that the liability of the TNC or OEPP shall not exceed the amount of the 20 insurance coverage of the operator.

“Each TNC or OEPP shall establish a quick response team to provide immediate medical care or bring any person injured by the operation of the motorcycle-for-hire booked through its digital platform to the nearest 24 hospital or medical facility,” the House bill said.

Last Feb. 14, Sarmiento wrote a letter to Sen. Grace Poe, who heads the Senate committee on public services, to seek the assistance of her office for the immediate passage of SB No. 1341, the counterpart bill in the Senate.

It was on Feb. 13 when 16 senators signed the report of the committees on public services and local government to craft the proposed Motorcycle-for-Hire Act, which will legalize the services of motorcycle taxis.

She said the legalization and regulation would help address safety risks present in both registered motorcycle-for-hire and “colorums” as well as improve commuter welfare by giving them the option to choose legitimate service providers.

The bill said that a two-wheeled vehicle as a public transport should weigh less than 1,000 kilograms, can travel faster than 50 kph, has a minimum engine displacement of 125 cubic centimeters, and have a backbone-type built.