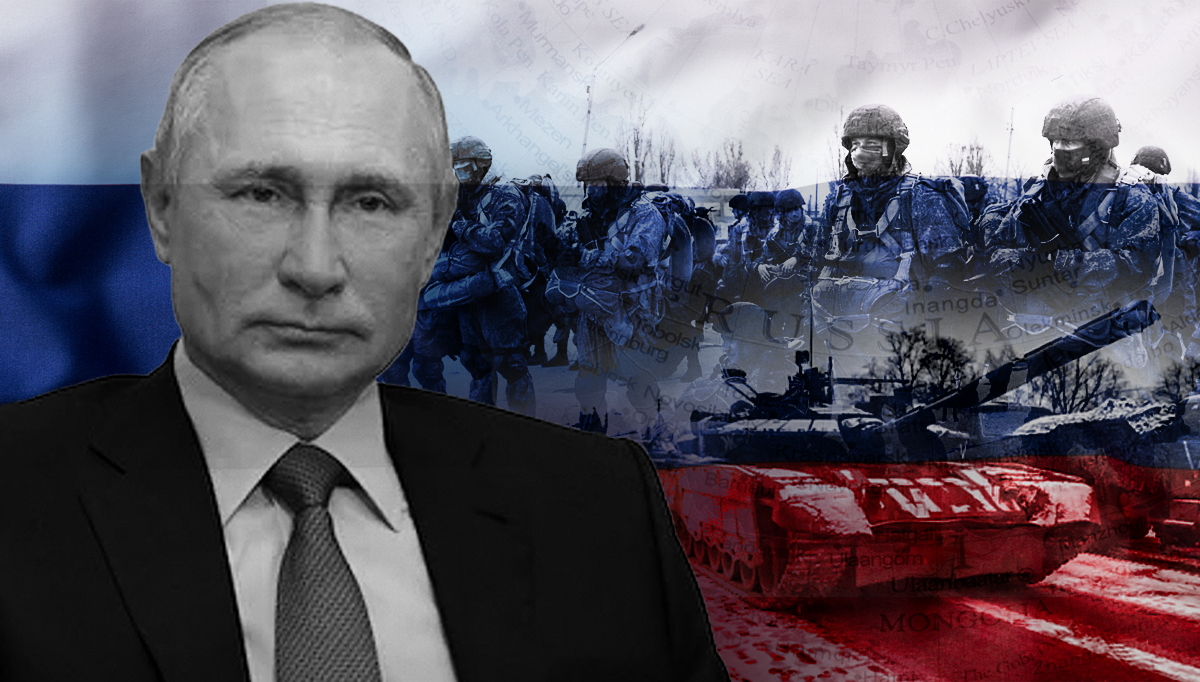 MANILA, Philippines—As Vladimir Putin escalates his unprovoked invasion of Ukraine, his regime is making its chilling presence felt in the variety of weaponry which proves further Russia’s status as the world’s second biggest arms exporter.

On Feb. 24, Putin launched the invasion of Ukraine, describing it as “special military operations.”

In the last 22 days since Putin ignored international pleas and mocked global norms in a quest to conquer Ukraine, a former Soviet republic, the Russian dictator showed he was more than willing to use deadly force and unleash a terroristic war on millions of people.

According to experts, among the list of deadly arms Russia used or could be used against Ukraine were thermobaric launchers or “vacuum bombs”—considered by many as one of the most brutal weapons to ever exist—cluster bombs, warplanes, and nuclear weapons.

Such a list of weaponry further supported figures from the Stockholm International Peace Research Institute (SIPRI), which named Russia as the second biggest arms exporter across the globe between 2017 to 2021.

SIPRI is an independent international institute dedicated to research in conflict, armaments, arms control, and disarmament. It was established in 1966 and has since provided data, analysis, and recommendations, based on open sources. 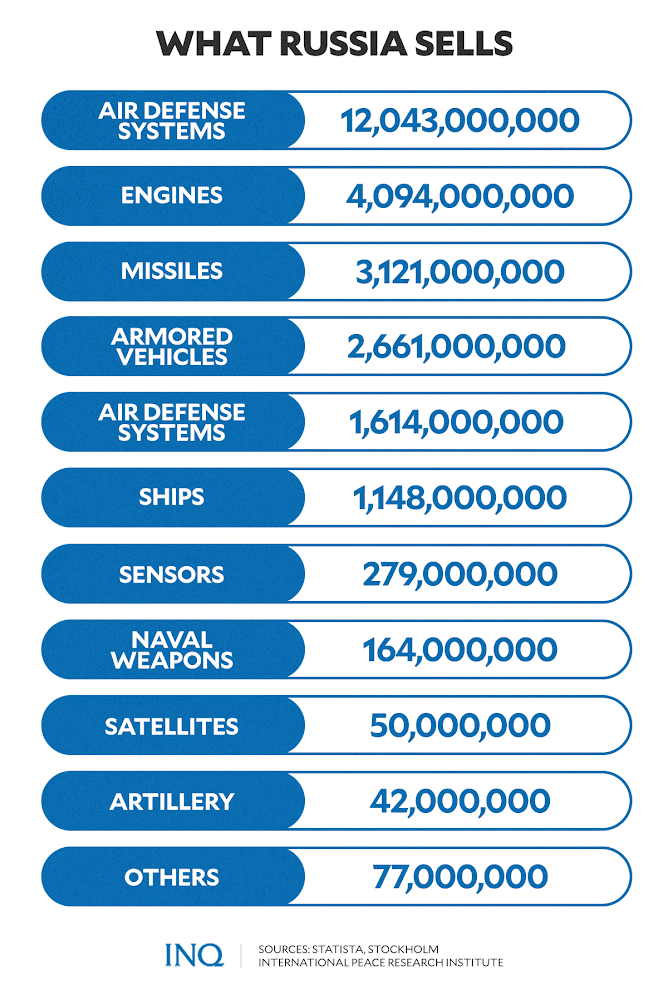 In this article, INQUIRER.net looked closely at Russia’s top customers, the weapons and price tags attached to the weapons trade, and how the deadly business impacted consumer countries’ stance on Putin’s aggression in Ukraine.

According to an analysis by the consumer firm Statista of available data from SIPRI, a huge share of the total 25,293,000,000 arms exported by Russia from 2017 to 2021 were sold to the following countries:

India, the biggest customer of the Russian defense industry, was also the top arms importer in the world between 2017 and 2021—and was responsible for 11.3 percent of the total arms imported globally during the same period. 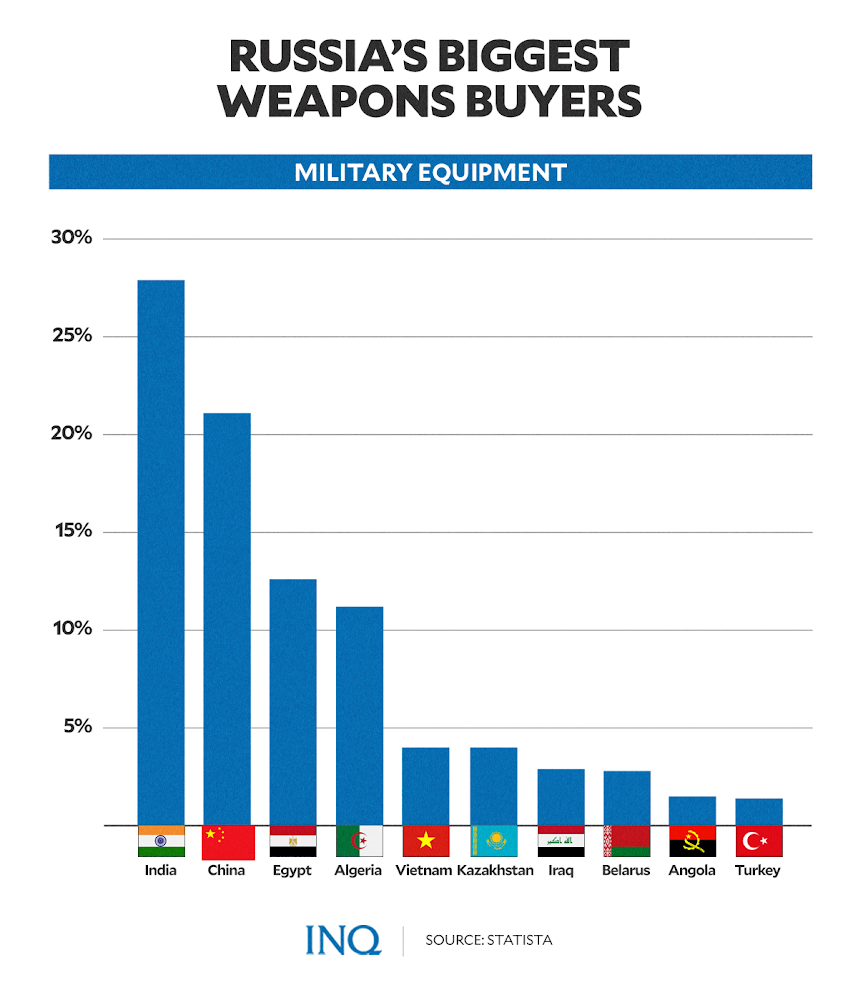 Two of Russia’s biggest arms trade customers—Egypt and China—were also on the list of the world’s biggest arms importers during the past five years, as analyzed by Statista in a separate report.

The Philippines was not included in the SIPRI Arms Transfers Database of arms exports from Russia between 2017 and 2021, although in 2017, Russia—whose leader, Putin, was previously described by President Rodrigo Duterte as his “favorite hero”—gave the country several firearms, including:

The military equipment was handed over by Russia to the Philippines after Philippine officials signed a contract with Rosoboronexport—the sole state intermediary agency for Russia’s exports and imports of defense-related and dual-use products, technologies, and services.

Based on research by INQUIRER.net, Russia has exported or sold millions of different types of arms and weaponry from 2017 to 2021 to at least 45 countries and several other unlisted recipients by the SIPRI.

Among these arms and weaponry exported during the said period, according to data from SIPRI were:

A report by Al Jazeera citing data from SIPRI showed that between 2016 and 2020, Moscow sold at least 1 trillion pesos ($28B) worth of weapons to 45 countries. 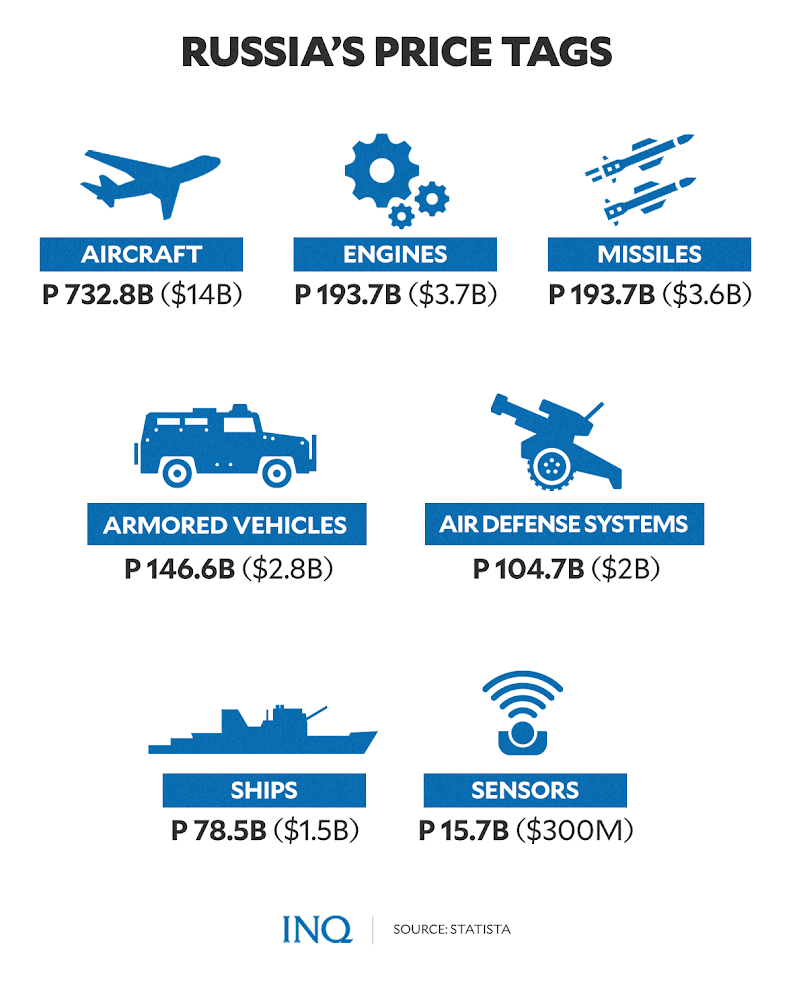 The price tags of some of the arms exports from Russia during the said period were:

Records from SIPRI’s Arms Transfers Database showed the most recent transactions—sold and purchased arms and weapons in 2021—between Russia and its biggest customers.

Last year, India received 100 out of the 156 BMP-2 infantry fighting vehicles (IFV) it ordered from Russia in 2020. According to SIPRI, the acquisition of the IFVs was part of a $148M deal.

The other recent purchase made by India from Russia’s stock of arms and weaponry included 17,500 Konkurs anti-tank missiles and 12 Su-30MKI FGA aircraft.

Egypt was also sent a variety of arms and weapons, including those which were received by the country, like:

Based on analysis by Katharina Buchholz, senior data journalist at Statista, the arms trade or business with Russia might have influenced some of its biggest customers’ stance on the ongoing invasion by Putin’s forces of Ukraine.

“India’s dependence on Russian defense technology has been identified as one of the main reasons why the country did not speak out against Russia after the country invaded Ukraine at the end of last month and instead has attempted to remain neutral,” said Buchholz.

“Eighty-five percent of the country’s military equipment is believed to be Russian or Soviet, according to the Journal of Indo-Pacific Affairs. Russia and India are also close on trade, with India relying on Russia for fertilizer and energy needs,” she added.

On March 3, 193 members of the United Nations General Assembly (UNGA) voted on a resolution condemning Russia over its invasion of Ukraine and demanded that Moscow withdraw its military forces.

A total of 141 countries, including the Philippines, backed the resolution. Meanwhile, 35 countries abstained and five voted against it, including the Russian Federation.

Here were the votes of Russia’s biggest arms customers: