MANILA, Philippines—As Vladimir Putin’s assault on Ukraine continued to escalate, the United States is rushing at least P10 billion worth of weapons for Ukraine’s defense amid reports that Putin, who had warned he was ready to deploy nuclear weapons, was likely to resort to biological weapons to conquer the former Soviet republic.

The war put the spotlight on the role of the US and Russia as the world’s biggest arms exporters.

According to analysis by the consumer firm Statista of data from the Stockholm International Peace Research Institute (SIPRI), from 2017 to 2021 a total of 136 billion arms were exported or sold globally by at least 61 countries, the European Union and “unknown suppliers.”

Among the top eight countries listed and analyzed by Statista from SIPRI’s database, the US continued to be the world’s largest arms exporter. 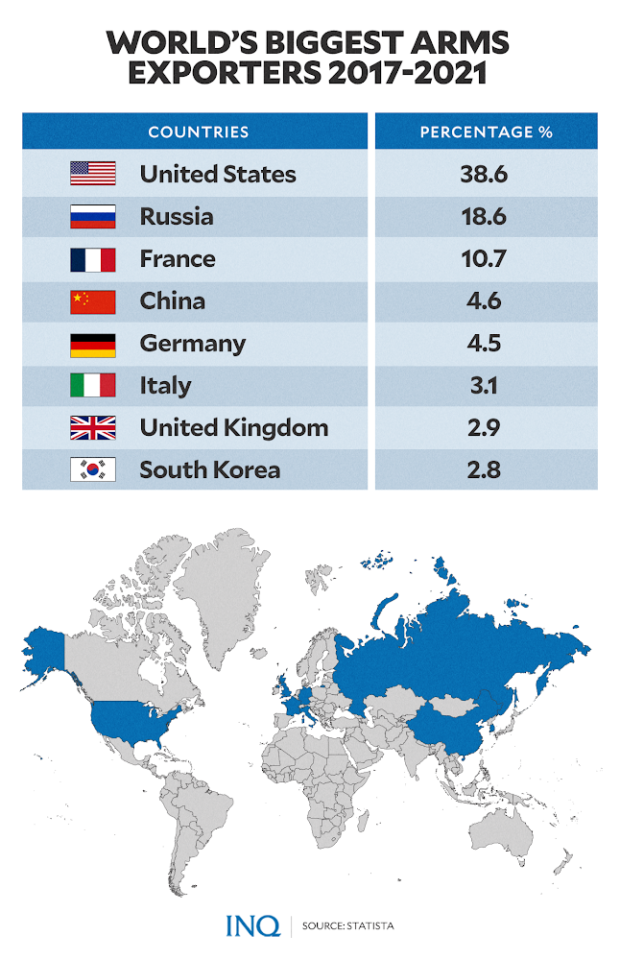 “During the most recent time span, the country supplied arms to more than 100 countries,” said Katharina Buchholz, data journalist for Statista.

These countries included the Philippines, according to a previous report by Statista.

However, the analysis noted that Russia’s shares of global arms exports has been decreasing lately.

“Russia’s biggest customer is India, followed by China, but the latter country has been buying fewer Russian arms in the past. Sales to Algeria and Egypt also declined,” Buchholz wrote. 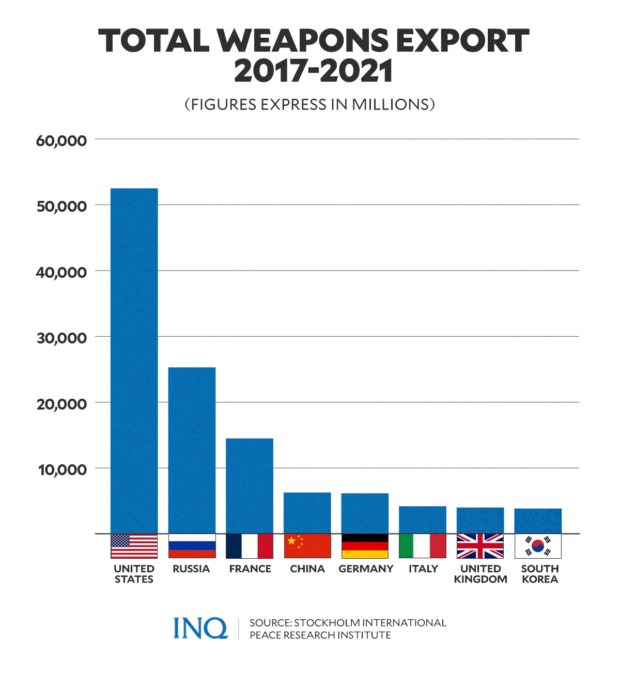 France, in the third spot, exported 10.7 percent of the global arms between 2017 to 2021, while Germany, with a 4.5 percent share in arms exports across the world, fell in fifth place and was overtaken by China.

“(Germany) was overtaken as the fourth-biggest exporter by China, which revived international sales,” the data journalist explained.

“Italy and South Korea also rose in the ranking compared to last year. Italy’s biggest export partner is Egypt, but sales in 2021 rose most to Qatar, Turkey, and Kuwait,” she continued.

“In the case of South Korea, a major sale to Indonesia upped the country’s export figure,” she added.

How many exactly did they export?

According to the SIPRI Arms Transfers Database, here are the estimated count of arms released across the world by the top arms exporters.

While the Philippines was not included in the database, it was reported last month that the country has exported at least P235.6B ($4.5B) worth of “strategic goods,” which could be used by the military. 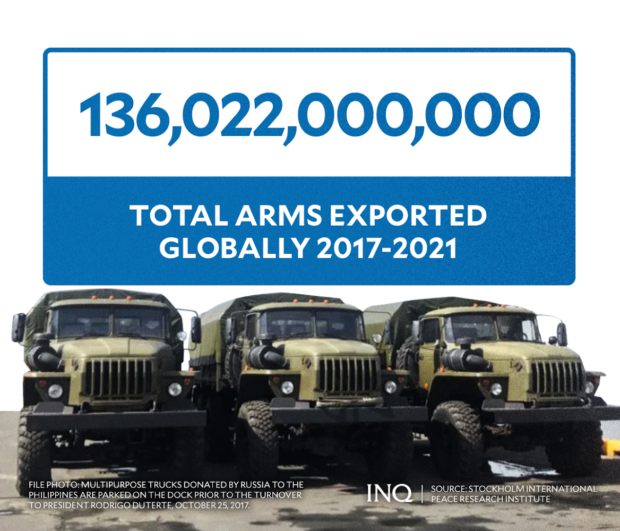 Exports of information security systems, equipment, and components account for 98 percent of the overall value, with semiconductors and integrated circuits occupying the remaining 2 percent.

“Under Republic Act No. 10697 also known as the Strategic Trade Management Act (STMA), strategic goods are defined as products that, for security reasons or due to international agreements, considered to be of such military importance that their export is either prohibited altogether or subject to specific conditions,” said the Department of Trade and Industry – Strategic Trade Management Office (DTI-STMO) in a statement.

“Under the said law, the DTI-STMO is mandated to regulate and authorize the export of strategic goods,” it added.

The Philippines had its history of deals with some of the top arms exporters—some of the exported arms were acquired through donations, while some were purchased by the government through billion-peso contracts.

The US, which has been a long-standing ally of the Philippines, has expressed criticism of the deaths arising from President Rodrigo Duterte’s war on drugs, prompting the Philippine leader to threaten to cut ties with the Western country.

Former US President Barack Obama was one of Duterte’s drug war critics. 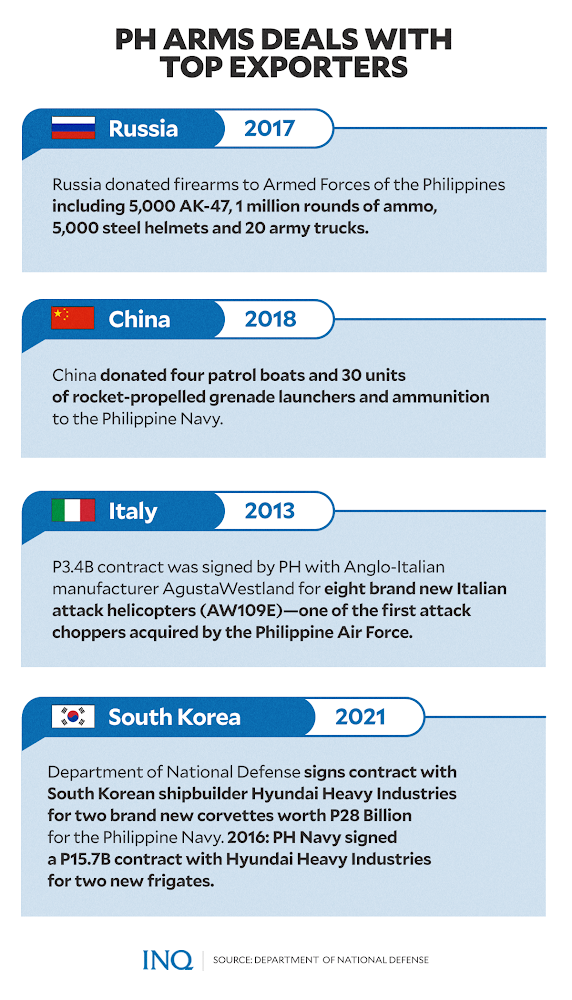 The US has previously canceled the Philippines’ planned purchase of thousands of basic assault rifles in 2017 and again in 2020, both of which were due to alleged human rights violations linked to the war on drugs in the country.

READ: PNP official: US has put on hold delivery of 27,000 rifles to PH

The two nations’ relationship recovered under the presidency of Donald Trump, whom Duterte regarded as his “friend.”

Still, in November and December 2020—despite the US bill that aimed to suspend military aid to the Philippines—the US donated military equipment to the country.

In November, the US gave the Philippines P943M ($18M) worth of weapons systems, which according to Foreign Affairs Secretary Teodoro Locsin Jr. would be used against Islamist militants in Mindanao.

READ: US donates $18M worth of weapons system to PH to fight terrorism

The following month, the outgoing administration of Trump donated an additional P1.38 billion worth of military equipment to the Philippines.

Those were just the tip of the iceberg when it comes to the arms or weapons deal between the two longstanding allies. 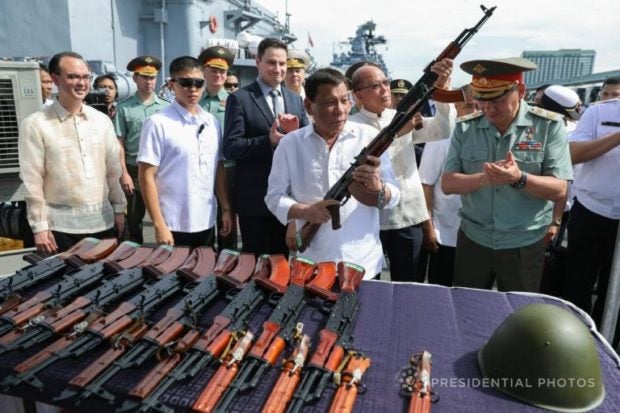 Russia—whose leader, Putin, was previously described by Duterte as his “favorite hero”—likewise donated firearms to the AFP.

In 2017, the military equipment handed over by Russia to the Philippines after Philippine officials signed a contract with Rosoboronexport—the sole state intermediary agency for Russia’s exports and imports of defense-related and dual-use products, technologies, and services—included:

In 2018, China donated four patrol boats and 30 units of rocket-propelled grenade launchers and ammunition to the Philippine Navy.

Way back in 2013, a P3.4B contract was signed by PH with Anglo-Italian manufacturer AgustaWestland for eight brand new Italian attack helicopters (AW109E)—one of the first attack choppers acquired by the Philippine Air Force.

Around 2016, the PH Navy signed a P15.7B contract with Hyundai Heavy Industries for the construction and delivery of two new frigates—one of two big-ticket modernization projects funded by the administration of the late President Benigno Aquino III.

The acquisition, however, had been fraught with controversies.