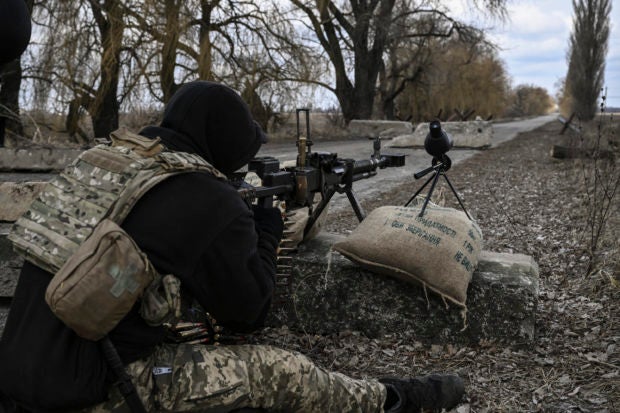 A Ukrainian serviceman aims towards Russian positions outside the city of Brovary, east of Kyiv, on March 9, 2022. AFP

PARIS — On the 14th day of Russia’s invasion of Ukraine, Russian forces were encircling at least four major cities Wednesday as Kyiv braced for a possible assault.

The capital remains under Ukrainian control but at increasing risk of seeing itself surrounded, with many observers believing Russia is still aiming to capture the city.

Here is a summary of the situation on the ground, based on statements from both sides, Western defence and intelligence sources and international organisations.

Kharkiv remains in Ukrainian hands despite increasingly intense Russian bombardment, according to Western sources, and the city is likely now surrounded.

Russian forces are also pressing an offensive through the separatist Donetsk and Lugansk regions that are backed by Russia, though how far they have penetrated remains unclear.

The city of Sumy in northeast Ukraine is now encircled by Russian troops. Some 5,000 civilians were able to escape on Tuesday on around 60 buses.

Kyiv and the north

Kyiv remains under Ukrainian control despite heavy bombardments, though Western observers point to a Russian column of hundreds of vehicles outside the city.

The British defence ministry said that there was fighting northwest of Kyiv but that Russian forces were “failing to make any significant breakthrough”.

Russian forces are concentrated 60 kilometres outside Kyiv and are seeking to attack from the east, according to the US Defense Department.

The Washington-based Institute for the Study of War said forces appeared to be concentrating for an assault on Kyiv in the next four days.

Ukrainian forces also retain control of the northern town of Chernihiv, which has seen heavy civilian casualties in recent days and appears to be encircled.

Russia has besieged the strategic city of Mariupol, and attempts to evacuate an estimated 200,000 civilians from the city have so far failed.

Taking the city would allow Russia to link forces pushing north from the annexed Ukrainian peninsula of Crimea with their forces from the east.

The major port city of Odessa remains under Ukrainian control and has so far been spared fighting. But the US Defense Department said Russian ground forces appeared primed to attack the city, possibly in coordination with an amphibious assault.

Russian forces last week took the southern city of Kherson, just north of Crimea, and there is now heavy fighting for control of the city of Mykolayiv to the northwest. Some sources believe Russia could bypass Mykolayiv and head direct for Odessa.

The west and center

The west of Ukraine remains largely spared from the fighting. The main city of Lviv has become a hub for foreign diplomatic missions and journalists as well as Ukrainians seeking safety or wanting to leave the country.

The United Nations said Tuesday that it had recorded 474 civilian deaths in Ukraine, including 29 children, though the actual toll could be far higher.

Ukraine and Western sources claim that the Russian death toll is far higher than Moscow has so far admitted to.

Ukraine says more than 12,000 Russian soldiers have been killed, though US estimates put the number of Russians killed at 2,000 to 4,000.

Some 2.16 million refugees have fled Ukraine since the invasion began, more than half going to Poland, according to the UN refugee agency.