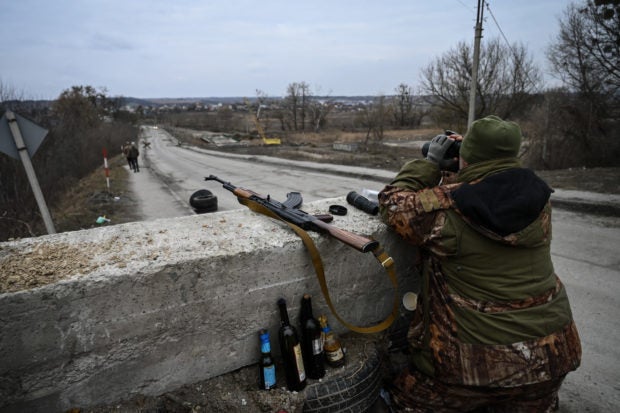 An Ukrainian serviceman looks through binoculars towards the town of Stoyanka at a checkpoint before the last bridge on the road that connects Stoyanka with Kyiv, on March 6, 2022. AFP

PARIS — Almost two weeks into the Russian invasion of their country, Ukrainian forces have managed to hold up the advance of their foes with resistance that has won plaudits from Western allies.

Analysts say their performance against a numerically far superior army has been fueled by a combination of good preparation, national solidarity and Russian mistakes.

However the future remains unclear, with President Vladimir Putin repeatedly declaring that nothing will stand between him and his aims.

“They (the Russians) are basically not going very fast,” said a senior French military source, asking not to be named. “At some point they will have to realign but it will not signify a failure.”

AFP looks at five ways Ukraine has been able to stall the Russian advance.

Ukraine, with Western help, substantially bolstered its armed forces after 2014, when Russia annexed the Ukrainian peninsula of Crimea in a lightning operation and pro-Russia separatists overran parts of the east of the country.

In 2016, Nato and Kyiv began a training program for Ukrainian special forces, who now number 2,000 and have been able to help civilian volunteers.

Understanding that the US and Nato won’t come to its rescue on the battlefield, Ukraine’s strategy has focused “on bleeding Moscow so as to make occupation untenable,” the CIA veteran wrote in Foreign Affairs.

Russia, relying on Soviet-era familiarity with an area that Moscow controlled under the USSR, appears to have underestimated the Ukrainian forces’ home-turf advantage.

This included both knowledge of the terrain — at a time of the year when tracks can turn to mud — and the capacity of locals to themselves take up arms against the invading forces.

In such a scenario of irregular warfare, weaker forces can maximise the advantages they have over their stronger opponents — “advantages of terrain, local knowledge, and social connections,” said Spencer Meredith, professor at the College of International Security Affairs.

Challenges will mount further if urban fighting develops when Russia seeks to penetrate inside cities like Kyiv.

“That changes everything,” said the French military source. “The Russians will run into trouble at every street corner, building by building.”

Led by President Volodymyr Zelensky, who has remained in Kyiv despite the risk to his life as Russia enters the region of the capital, Ukrainians have shown the deepest resilience in adversity.

Ordinary citizens have volunteered for the frontline, often after ensuring their families were safely headed to security in the west of the country or outside its borders.

Ukraine had no “other choice than to further increase its attrition warfare capacity by rapid training of territorial troops and use of light weaponry,” said retired French colonel Michel Goya.

Military analysts say Russia made strategic errors in the early days of the invasion after it was launched on February 24, sending in too few ground troops in the initial phase and failing to get ground and air forces working in tandem.

It appears Moscow expected to achieve military success within days.

“At the outset they thought they could introduce units very quickly into the capital Kyiv… But very early on they got bloody noses,” said Michael Kofman, director of the Russia Studies Program at the Center for Naval Analyses in the US.

“The assumptions were ridiculous… how could you take Kyiv in three days? The Russian military has now adjusted and is trying to conduct this as a combined arms operation,” he said.

Russia has set alarm bells ringing across the world by keeping tens of thousands of troops deployed close to the border with Ukraine over recent weeks.

But it is possible that few had any idea they were about to be sent to war in a neighbouring country whose inhabitants are fellow Slavs and where many speak Russian as their mother tongue.

Morale will not have been helped by heavy Russian casualties who, according to the French source, have included at least one major general — a sign the top military elite have felt compelled to visit the frontline.

Tom Pepinsky, non-resident senior fellow at the Brookings Institution, said evidence so far suggested that Ukraine’s treatment of Russian prisoners of war could become harsher as the invaders press further into the country.

“The Ukrainian resistance will be most effective if Russians are on edge, sleepless, and prone to overreactions,” he said.