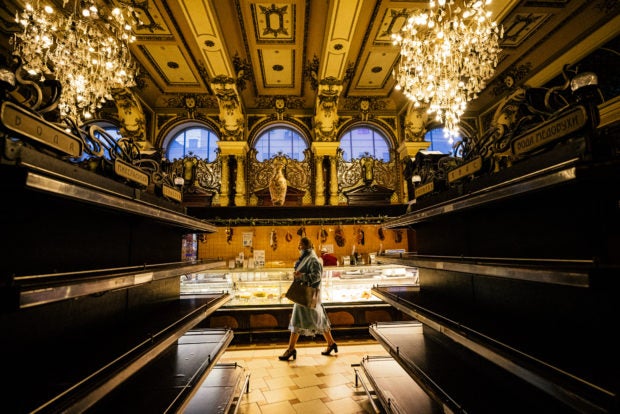 A view of the historic Eliseevsky grocery store in downtown Moscow on March 30, 2021. AFP FILE PHOTO

MOSCOW — Yulia Shimelevich hurries to stock up on imported food for her cat and dog as it may soon disappear from Moscow shelves with the onslaught of sanctions from Western capitals on Russia over Ukraine.

“All the luxuries that we had grown accustomed to in recent years — imported products and clothes — are already in the past”.

Major retailers such as Zara, H&M, Ikea and many others suspended sales in Russia overnight, closing their doors in many shopping centres in the capital Moscow.

Shimelevich tells AFP that since Russian troops moved into Ukraine on February 24, most of her students had cancelled their classes, with many deciding to leave Russia in the face of repressive laws and looming financial difficulties.

Her son joined those departing Russia on Sunday.

“The hardest part will not be tightening our belts… but separation from my son and a feeling of guilt in front of the whole world,” Shimelevich says.

Many Muscovites still remember the hardships of the 1990s, when Russia experienced food queues and hyperinflation after the fall of the Soviet Union.

For them, the past two decades under President Vladimir Putin have in comparison represented a period of abundance and prosperity.

But the crippling sanctions that have piled up since Russian troops entered Ukraine have led many to believe that there are more difficult days ahead.

Anastasia Naumenko, a 19-year-old journalism student, says she lost her job at a store of the fashion brand Oysho, after its owner, Spanish clothing giant Inditex, announced it was leaving the Russian market.

She says she is hoping to buy some make-up in the next few days, if she can afford it with the ruble plummeting under the strain of unprecedented sanctions.

“I’ve heard that prices have already quadrupled,” she says walking into a Moscow mall called Metropolis.

Naumenko also believes she may have to give up on her dream of becoming a journalist after Russia passed a law in the wake of the Ukraine conflict introducing up to 15 years in jail for “fake news” about Russia’s army.

“Who needs my profession with this censorship?” she asks.

“How do you live in a world that is limited to Russia?”

Shopping in a Moscow pharmacy, interior designer Pyotr Loznitsa says he has lost many clients over the past several days.

But what worries him the most is the future of his children and the availability of imported medicines for his elderly parents.

“If in the next year it doesn’t get better, then I’m going to get my children out of here at all costs,” says Loznitsa, 47. For the rest, he believes Russians will show resilience.

“In Iran, they too adapted” to sanctions, Loznitsa says.

But some, like Ksenia Filippova, believe sanctions could also be an opportunity for the Russian market.

“Russian brands can be a replacement. Maybe the sanctions will be good for the Russian market,” Filippova says.

However, she admits that rising prices “will hit wallets”.

“I came to buy my favourite brands one last time, because everything is closing down,” the 19-year-old student says, carrying a small pink bag out of a lingerie store.

Putin has sold the economic sanctions as an opportunity for Russia to produce its own goods.

But while there has been some progress in textiles and agriculture in other sectors, such as high tech, it has been minimal.

Standing on Kuznetsky Most in the heart of Moscow, once filled with bustling boutiques and shops, Tamara Sotnikova says she doesn’t mind sanctions.

“Everything we have should be ours,” the 70-year-old retiree says.

“In the Soviet era, what did we have? Nothing! And we lived a normal, peaceful life.”