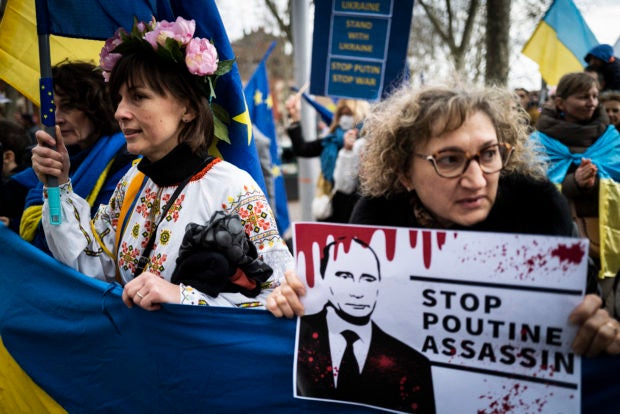 A demonstrator holds a banner reading ‘ Stop Putin Assassin’ during a rally against the Russia’s invasion of the Ukraine, in Toulouse, southern France, on March 6, 2022. AFP

PARIS — France is to send medical aid to Ukraine including iodine tablets, which help protect against the effects of exposure to radiation, French Foreign Minister Jean-Yves Le Drian said Sunday.

“Yes, we have sent different medical products,” Le Drian told France 2 television in response to a question on the sending of the tablets.

Earlier Sunday, France’s ambassador in Ukraine, Etienne de Poncins, told BMFTV that 2.5 million doses were to be sent to Ukraine in the coming days.

Macron had expressed his “serious concern” for the safety of Romania nuclear sites after Russian attack on the Zaporizhzhia nuclear plant on Friday.

Putin had said he was ready to respect IAEA norms for the protection of power stations and agreed to open talks with the agency, the French presidency told the media.

Macron’s view — and that of the International Atomic Energy Agency (IAEA) — was that Russia had to accept Ukrainian sovereignty over its own power stations for the safety not just of Ukraine but the whole of Europe, said Le Drian.

The IAEA governors hold their quarterly meeting on Monday in Vienna and the agency’s director general, Rafael Grossi is due to speak to the press early in the afternoon.