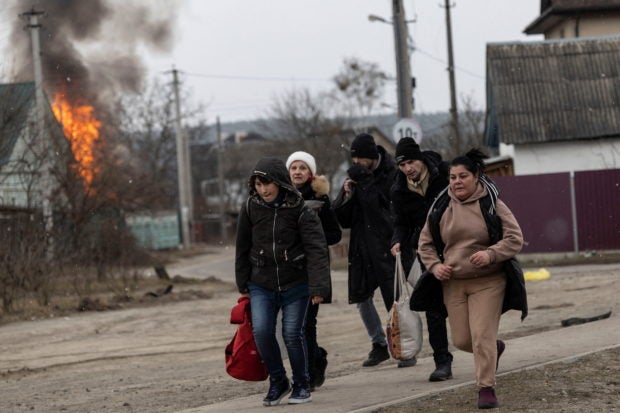 Local residents look for cover as they escape from the town of Irpin, after heavy shelling on the only escape route used by locals, while Russian troops advance towards the capital, in Irpin, near Kyiv, Ukraine March 6, 2022. REUTERS

Russia steps up its shelling of cities across Ukraine. The UN says 1.5 million people have now fled, the fastest-growing refugee crisis since World War II.

Attempts to evacuate civilians from the besieged Ukrainian city of Mariupol fail again, amid repeated ceasefire violations. Residents are without power and water.

Ukraine’s military says it is fighting “fierce battles” with Russian forces on the edge of the southern city of Mykolayiv, which sits on the road to the country’s biggest port Odessa.

Dozens of civilians are being killed in the battle for Chernihiv in the north. Some of those who remain are living in craters or among the ruins.

Thousands more are arrested at anti-war demonstrations across Russia, bringing the total to well over 11,000, since the invasion began.

Putin: We will win through talks or war

Russian President says he will achieve his aims in Ukraine “through negotiation or through war”.

The United States gives a “green light” for Poland to supply Kyiv with fighter jets. Moscow warns that could drag Nato members into the war.

US Secretary of State Antony Blinken says the West is in “very active” discussions about a Russian oil embargo. Brent crude oil approaches $140 a barrel, an all-time high.

France announces it will send iodine tablets and other medical supplies to Ukraine. They are used to protect against the effects of exposure to radiation.

Foreign media including the BBC, CBC, ARD, ZDF, Bloomberg News, CNN, CBS, RAI and EFE have suspended reporting from the country after Moscow threatened jail terms for media reporting on the war.