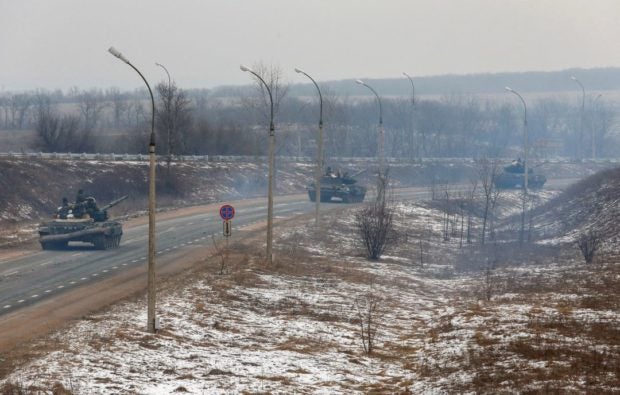 Service members of pro-Russian troops in uniforms without insignia drive tanks during Ukraine-Russia conflict on the outskirts of the separatist-controlled city of Donetsk, Ukraine March 5, 2022. REUTERS

The number of Ukrainian refugees was expected to reach 1.5 million on Sunday as Russia continued its attack for an 11th day, and President Putin said Western sanctions were akin to a declaration of war.

Talk of fighter jets for Ukraine

After Ukrainian President Zelenskiy asked U.S. lawmakers for help securing aircraft from European allies, the White House said Washington was working with Poland as it considers providing fighter jets. The United States could replenish Poland’s supply, although challenges remain given the contested airspace.

Visa and Mastercard, also following a request from Zelenskiy, said they were suspending operations in Russia and would work with clients and partners to cease all transactions there, the latest in an unprecedented series of government and corporate punishment of Russia.

Israeli Prime Minister Bennett, flying to Moscow on the Sabbath, became the first world leader to meet face to face with Putin since he launched the invasion. He then spoke with Zelenskiy in an attempt to mediate an end to the war in coordination with the United States, France and Germany.

Seven-time WNBA All-Star and two-time Olympic gold medallist Brittney Griner was detained in Moscow last month for possession of vape cartridges containing hash oil, TASS news agency said. Russia said it had detained a U.S. player. The centre’s team, Phoenix Mercury did not mention the circumstances but said: “We love and support Brittney and at this time our main concern is her safety, physical and mental health, and her safe return home.”

Escaping the war zone in trains

Thousands of women and children, many weeping and numb with exhaustion, arrived in Lviv in western Ukraine as the state railway put on more trains to rescue people from fierce Russian attacks on eastern cities.

“Help us if you can, we all want to live, we have kids, husbands, we are mothers and fathers, we are also people,” said Volnovakha resident Larisa as she tried to flee the fighting. “Where shall I go? What’s on me and a bag of things is all I got. That’s all I have.”

Putin is to meet on Sunday with Turkish President Erdogan, whose country, a Nato member, shares a maritime border with Ukraine and Russia. Ukraine said a third round of ceasefire talks with Russia would go ahead on Monday; Moscow was less definitive.