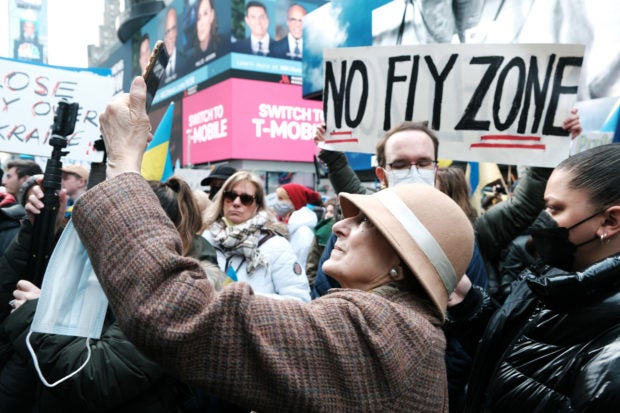 Hundreds of people gather in Manhattan’s Times Square in support of Ukraine and to demand an end to the Russian invasion of the country on March 05, 2022 in New York City. As the war moves into its third week, hundreds of civilians have been killed as Russians continue their bombardment of key cities and towns. AFP

MOSCOW — Russian President Vladimir Putin warned Saturday that any country imposing a no-fly zone over Ukraine would be considered by Moscow to have entered the conflict, while threatening his ex-Soviet neighbor’s continued existence.

Ukrainian leader Volodymyr Zelensky has pleaded with the West to support a no-fly zone as his besieged country resists Moscow’s invasion, but allies have so far ruled out such a move, fearing it would escalate into a wider war with nuclear-armed Russia.

Putin warned that a no-fly zone would have “colossal and catastrophic consequences not only for Europe but also the whole world”.

“Any movement in this direction will be considered by us as participation in an armed conflict by that country,” the Russian leader said during a meeting with employees of national airline Aeroflot.

He also suggested Ukraine could lose its statehood if it continues along this path.

“The current (Ukrainian) authorities must understand that if they continue to do what they are doing, they are putting in question the future of Ukrainian statehood. And if this happens, they will be fully responsible,” he said.

With Moscow’s military incursion in its second week, the economic and humanitarian toll of the war has spiralled, sending civilians fleeing both Ukraine and Russia.

But Putin dismissed rumours that the Kremlin was planning to declare martial law in Russia.

“Martial law should only be introduced in cases where there is external aggression … we are not experiencing that at the moment and I hope we won’t,” he said.