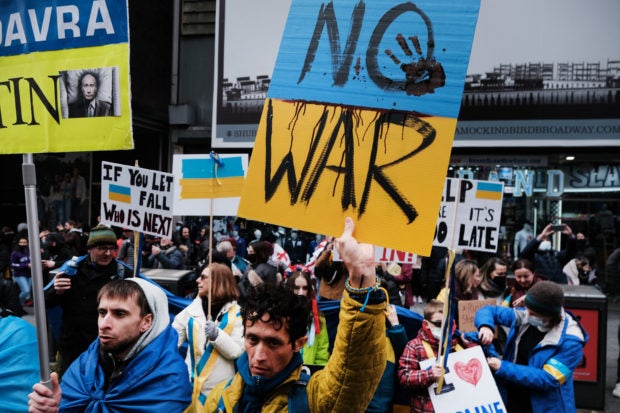 Hundreds of people gather in Manhattan’s Times Square in support of Ukraine and to demand an end to the Russian invasion of the country on March 05, 2022 in New York City. AFP

NEW YORK — Thousands of people gathered Saturday in Times Square in New York in support of Ukraine, demanding the United States, Nato or the European Union intervene to stop the unfolding war.

Some were Ukrainian-American, while others were just New Yorkers who wanted to express their opposition to Russia’s invasion of the former Soviet republic.

The iconic New York square, known for its giant billboards, was a sea of blue and yellow, the colors of the Ukrainian flag. Protesters of all ages waved signs for hours calling for the end of the war, a no-fly zone over Ukraine and to simply “stop Putin,” with some photo collages comparing Russian President Vladimir Putin to Hitler.

The rally easily filled Times Square, which extends for several blocks in the heart of Manhattan.

Cars parked along the edge of the square revved their engines, as people stood out of the sun roofs waving Ukrainian flags.

Another demonstrator was Vasyl Koval, 31. The web developer, who had left his parents in Ukraine, came to Times Square to demand that Western nations “close the sky” over his home country to Russian fighter jets.

He urged the United States and NATO to act.

In tears, Tatiana Dyakun, a 38-year-old Ukrainian who has lived in the United States for six years, denounced the Russian invasion of Ukraine as “terrorism” and a “crime.”

“We ask for help… Please don’t wait!” she said to AFP, adding she was grateful for the “huge support” already coming from Western countries.

When asked if she thought Europe and the United States should intervene in Ukraine, she said “yes,” even if it risked a third world war.

“It’s going to be anyway, tomorrow or after tomorrow,” she said.

Many of the slogans on the signs at the protest were in response to Putin’s statement that an attempt by any country to impose a no-fly zone over Ukraine would be considered “participation in an armed conflict.”

Kyiv’s request to impose a no-fly zone was rejected by both NATO and the chairman of the US Joint Chiefs of Staff, General Mark Milley.

Protests in support of Ukraine blossomed all over the United States Saturday, with sister rallies taking place in Miami and Los Angeles.