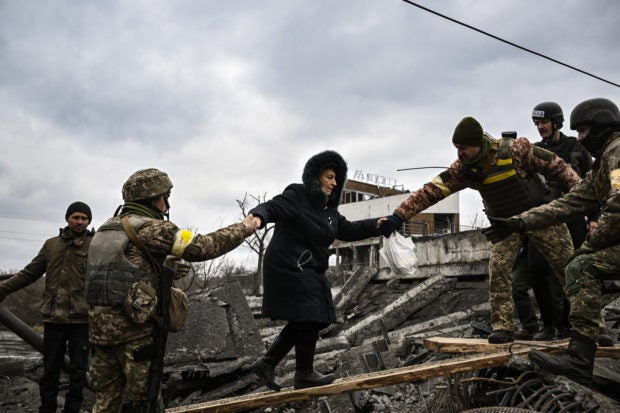 A woman is assisted by Ukrainian servicemen while people cross a destroyed bridge as they evacuate the city of Irpin, northwest of Kyiv, during heavy shelling and bombing on March 5, 2022, 10 days after Russia launched a military invasion on Ukraine. AFP

KYIV — Russian President Vladimir Putin has threatened the existence of Ukrainian statehood as his army’s invasion of the neighbor faces stiff resistance and his economy is increasingly asphyxiated by sanctions.

In the latest efforts to freeze Moscow out of the world economy, US-based card payment giants Visa and Mastercard announced they will suspend operations in Russia, while world leaders vowed to act over the intensifying onslaught.

“The current (Ukrainian) authorities must understand that if they continue to do what they are doing, they are putting in question the future of Ukrainian statehood,” Putin said on Saturday.

“And if this happens, they will be fully responsible.”

Since Russia’s invasion 10 days ago, the economic and humanitarian toll of the war has spiralled, sending more than one million people fleeing Ukraine. Officials have reported hundreds of civilians killed.

Kyiv has urged the West to boost military assistance to the besieged country, including warplanes, with President Volodymyr Zelensky pleading for Eastern European neighbours to provide Russian-made planes that his citizens are trained to fly.

Putin meanwhile escalated warnings against Nato, threatening a wider war if a no-fly zone is set up, as his forces resumed their offensive against a key Ukrainian city where security fears stalled a planned evacuation.

While Zelensky criticized Nato for ruling out the no-fly zone, Putin spoke of “colossal and catastrophic consequences not only for Europe but also the whole world” if such a step was taken.

“Any movement in this direction will be considered by us as participation in an armed conflict by that country,” Putin said.

He also dismissed rumours that the Kremlin was planning to declare martial law in Russia.

Visa and Mastercard both announced they will suspend operations in Russia, the latest major American firms to join the business freeze-out of Moscow.

Mastercard said it made the decision over the “unprecedented nature of the current conflict and the uncertain economic environment”.

Visa meanwhile said that “effective immediately” it would “work with its clients and partners within Russia to cease all Visa transactions over the coming days”.

Major corporations across a range of industries have halted business in Russia since the invasion, including US-based tech firms such as Intel and Airbnb to French luxury giants LVMH, Hermes and Chanel.

Visa and Mastercard had already announced that they were complying with US and international sanctions imposed on Russia in the wake of its attack.

However, Russia’s major banks — including its largest lender Sberbank and the Russia Central Bank — downplayed the effects that the cards’ suspensions would have on their clients.

The war has already had serious global economic impacts, with the IMF warning that its effects would be “all the more devastating” should the conflict escalate.

Russia’s business and other contacts with the West have been steadily cut. Moscow has suspended all flights by flagship carrier Aeroflot, effective Tuesday.

As frantic, top-level diplomatic talks continued, President Zelensky announced on Sunday that he spoke by phone with his US counterpart Joe Biden to discuss financial support and sanctions against Russia.

“As part of the constant dialogue, I had another conversation with @POTUS,” Zelensky tweeted. “The agenda included the issues of security, financial support for Ukraine and the continuation of sanctions against Russia.”

Hours earlier, the Ukrainian leader had addressed US lawmakers by video call, pleading for further funding and an embargo on Russian oil imports.

The American legislators promised an additional $10 billion aid package, but the White House has so far ruled out an oil ban, fearing it would ratchet up prices and hurt US consumers already stung by record inflation.

Weapons, ammunition and funds have poured into Ukraine from Western allies as they seek to bolster Kyiv against Moscow’s invasion.

Washington last week authorised $350 million of military equipment — the largest such package in US history.

While visiting Ukrainian refugees on the Polish border over the weekend, US Secretary of State Antony Blinken said Washington was seeking $2.75 billion for the unfurling humanitarian crisis as nearly 1.4 million civilians have fled.

Israeli Prime Minister Naftali Bennett made a surprise visit to the Kremlin Saturday for three hours of talks — Putin’s first face-to-face meeting with a foreign leader since the invasion began.

Kyiv had asked Israel — which has strong relations with both Russia and Ukraine — to launch a dialogue with Moscow.

Meanwhile, British Prime Minister Boris Johnson’s office said he is to launch an international “plan of action” to ensure Russia’s invasion of Ukraine fails, including a flurry of diplomatic meetings next week.

On the ground, the strategic city of Mariupol on the Azoz Sea has for days been under siege and without electricity, food and water.

After Russia declared a ceasefire to open a humanitarian corridor, city officials said the population of 450,000 could begin to leave by bus and private cars.

But the officials then delayed the evacuation, saying, “The Russian side does not adhere to the ceasefire and has continued shelling both Mariupol itself and its environs”.

A Russian Defence Ministry spokesman later announced the assault was back on, citing “the unwillingness of the Ukrainian side to… extend the ceasefire”.

The siege came as Russian forces inched closer to the capital Kyiv in an assault that has become ever-more indiscriminate — and deadly.

Working-class towns such as Bucha and Irpin are in the line of fire, and air raids Friday broke many people’s resolve to stay.

“They are bombing residential areas — schools, churches, big buildings, everything,” said accountant Natalia Dydenko, glancing back at the destruction she was leaving behind.

Dozens of civilians have been killed in the northern town of Chernihiv. Those remaining live in craters or among ruins.

“There were corpses all over the ground,” a man who gave his name only as Sergei told AFP, as air raid sirens wailed. “They were queueing here for the pharmacy that’s just there, and they’re all dead.”

AFP reporters saw scenes of devastation — despite Moscow’s insistence it is not targeting civilian areas.

A defiant Zelensky said Saturday that Ukrainian forces were counterattacking around Kharkiv, the country’s second-largest city, inflicting “such losses on the invaders that they have not seen even in their worst dream”.

Foreign Minister Dmytro Kuleba was equally defiant, saying, “Ukraine is bleeding, but Ukraine has not fallen, and stands both feet on the ground… The myth of the unbeatable and almighty Russian army is already ruined.”