KYIV — Russian President Vladimir Putin launched an attack on Ukraine on Thursday with explosions heard across the country and its foreign minister warning a “full-scale invasion” was underway.

Weeks of intense diplomacy and the imposition of Western sanctions on Russia failed to deter Putin, who had massed between 150,000 and 200,000 troops along the borders of Ukraine.

“I have made the decision of a military operation,” Putin said in a surprise television announcement that triggered immediate condemnation from US President Joe Biden and other Western leaders, and sent global financial markets into turmoil.

Shortly after the announcement, explosions were heard in Ukraine’s capital, Kyiv, and several other cities, according to AFP correspondents.

Kyiv’s main international airport was hit in the first bombing of the city since the Second World War and air raid sirens sounded over the capital at the break of dawn.

“I woke up because of the sounds of bombing. I packed a bag and tried to escape. We are sitting here, waiting,” said Maria Kashkoska, as she sheltered inside the Kyiv metro station.

Ksenya Michenka looked deeply shaken as she took cover with her teenage son.

“We need to save our lives,” she said.

Ukraine’s foreign minister said the worst-case scenario was playing out.

“This is a war of aggression. Ukraine will defend itself and will win. The world can and must stop Putin. The time to act is now.”

Within a few hours of Putin’s speech, Russia’s defense ministry said it had neutralized Ukrainian military airbases and its air defense systems. 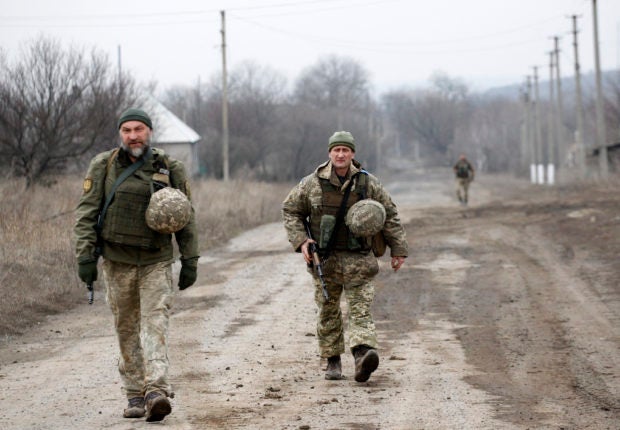 Ukrainian servicemen patrol in the settlement of Troitske in the Lugansk region near the front line with Russia-backed separatists on February 22, 2022, a day after Russia recognised east Ukraine’s separatist republics and ordered the Russian army to send troops there as “peacekeepers”. AFP

In his televised address, Putin justified the operation by claiming the government was overseeing a “genocide” in the east of the country.

The Kremlin had earlier said rebel leaders in eastern Ukraine had asked Moscow for military help against Kyiv.

Biden, who had for weeks sought to lead a Western alliance to deter Putin from invading Ukraine, spoke with Zelensky after the Russian operation began to vow US “support” and “assistance”.

Biden condemned the “unprovoked and unjustified attack by Russian military forces,” and urged world leaders to speak out against Putin’s “flagrant aggression”.

He also vowed Russia would be held accountable.

“President Putin has chosen a premeditated war that will bring a catastrophic loss of life and human suffering,” he said in a statement.

Biden was due to join a virtual, closed-door meeting of G7 leaders — Britain, Canada, France, Germany, Italy, Japan and the United States — on Thursday.

The G7 meeting is likely to result in more sanctions against Russia, which had long claimed it would not invade Ukraine, despite massing troops on the country’s borders.

Nato member Poland said it was invoking Article 4 of the Nato Treaty, calling for urgent consultations among leaders of the Western military alliance.

An excuse for the military operation was given on Wednesday when the Kremlin said the separatist leaders of Donetsk and Lugansk had sent letters to Putin, asking him to “help them repel Ukraine’s aggression”.

Their reported appeals came after Putin recognized their independence and signed friendship treaties with them that include defense deals.

The United Nations Security Council had met late Wednesday for its second emergency session in three days over the crisis, with a personal plea there by UN Secretary-General Antonio Guterres coinciding with Putin’s announcement.

“President Putin, in the name of humanity, bring your troops back to Russia,” Guterres said.

“Do not allow to start in Europe what could be the worst war since the beginning of the century.”

French President Emmanuel Macron condemned Russia’s decision to “wage war on Ukraine” and said France would work with its allies to “end the war”.

The US ambassador to the United Nations, Linda Thomas-Greenfield, warned that an all-out Russian invasion could displace five million people, triggering a new European refugee crisis.

The Russian ruble fell nine percent against the dollar after the attack and the Moscow Stock Exchange plunged almost 14 percent. 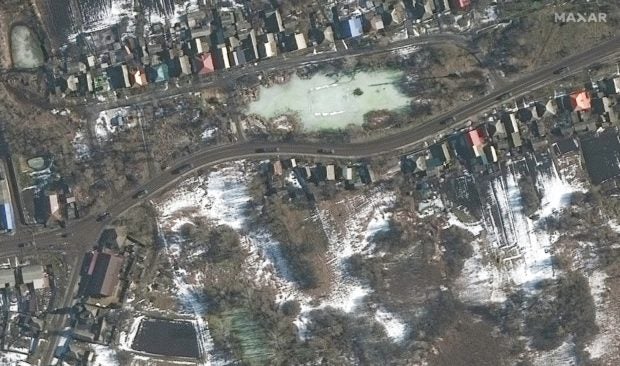 Western nations said ahead of Thursday’s operation, Russia had amassed 150,000 troops in combat formations on Ukraine’s borders with Russia, Belarus and Russian-occupied Crimea and on warships in the Black Sea.

Moscow’s total forces are much larger — around a million active-duty personnel — and have been modernized and re-armed in recent years.

But Ukraine has received advanced anti-tank weapons and some drones from Nato members. More have been promised as the allies try to deter a Russian attack or at least make it costly.

Russia has long demanded that Ukraine be forbidden from ever joining the Nato alliance and that US troops pull out from Eastern Europe.

Speaking to journalists, Putin on Tuesday set out a number of stringent conditions if the West wanted to de-escalate the crisis, saying Ukraine should drop its Nato ambition and become neutral.