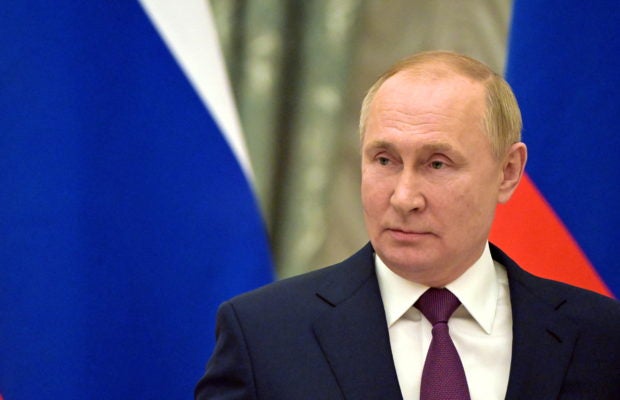 MOSCOW — Russian President Vladimir Putin said Wednesday that Moscow was ready to look for “diplomatic solutions” amid raging tensions with the West over Ukraine but stressed that the country’s interests were non-negotiable.

“Our country is always open for direct and honest dialogue, for the search for diplomatic solutions to the most complex problems,” Putin said in a video address to mark the Defender of the Fatherland Day, a public holiday in Russia.

But he added: “The interests of Russia, the security of our citizens, are non-negotiable for us.”

Putin spoke after parliament’s upper house, the Federation Council, on Tuesday gave him unanimous approval to deploy “peacekeepers” to two breakaway Ukrainian regions now recognized by Moscow as independent, and potentially into other parts of Ukraine.

In the video address, Putin congratulated the country’s men and said he was certain of the “professionalism” of the Russian military and that they will stand up for the country’s national interests.

He praised the battle-readiness of the Russian army and said the country would continue to develop state-of-the-art weapons.

“We will continue to develop advanced weapon systems, including hypersonic and those based on new physical principles, and expand the use of advanced digital technologies and elements of artificial intelligence,” the Kremlin strongman added. “Such complexes are truly the weapons of the future, which significantly increase the combat potential of our armed forces.”

Western officials have been warning for weeks the Russian leader has been preparing an all-out invasion of Ukraine.

On Tuesday, US President Joe Biden announced tough new sanctions against Russia for “beginning” an invasion of Ukraine but said there was still time to avoid war.

Trump says if he were in power, ‘genius’ Putin wouldn’t threaten Kyiv