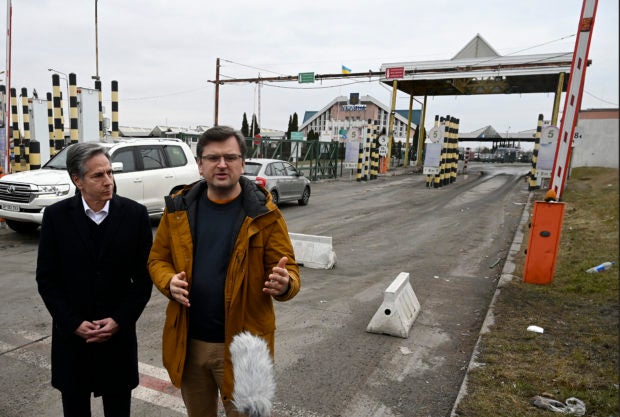 US Secretary of State Antony Blinken (L) and Ukrainian Foreign Minister Dmytro Kuleba speak to the media after meeting at the Ukrainian-Polish border crossing in Korczowa, Poland on March 5, 2022 . AFP

KORCZOWA, Poland — Ukraine on Saturday urged the West to amp up military assistance to the besieged country, including warplanes, as Russian President Vladimir Putin escalated warnings against Nato.

“The highest demand that we have is in fighter jets, attack aircraft, and air-defense systems,” Ukrainian Foreign Minister Dmytro Kuleba told a small group of journalists on the Poland-Ukraine border.

“If we lose the skies, there will be much more blood on the ground,” he said after a meeting with his US counterpart, Antony Blinken.

Separately, Ukrainian President Volodymyr Zelensky “made a desperate plea for Eastern European countries to provide Russian-made planes” that Ukrainians are trained to fly, US Senate Majority Leader Chuck Schumer said following a video call between legislators and the Ukrainian leader.

As the conflict moved into its 10th day, Russian President Vladimir Putin warned the West of a wider war if a no-fly zone is set up, as his forces resumed an offensive against a key Ukrainian city where security fears stalled a planned evacuation.

While Zelensky criticized Nato for ruling out a no-fly zone — amid worries it could spark a wider war — Putin spoke of “colossal and catastrophic consequences not only for Europe but also the whole world” if such a zone were established.

“Any movement in this direction will be considered by us as participation in an armed conflict by that country,” Putin said.

An intense round of shuttle diplomacy continued as Israeli Prime Minister Naftali Bennett made a surprise visit to the Kremlin for three hours of talks with Putin, Bennett’s office said.

It was Putin’s first face-to-face meeting with a foreign leader since the invasion began.

Kyiv had asked Israel — which has strong relations with both Russia and Ukraine — to launch a dialogue with Moscow.

For Zelensky, under an escalating bombardment that has flattened more and more infrastructure and sent nearly 1.4 million civilians fleeing, the Western military alliance’s “no” to a no-fly zone essentially gave “the green light for further bombing of Ukrainian cities and villages”.

The strategic city of Mariupol, on the Azoz Sea, has for days been under attack and without electricity, food and water.

After Russia declared a ceasefire to open a humanitarian corridor, city officials said the population of 450,000 could begin to leave by bus and private cars.

But the officials then delayed the evacuation, saying, “The Russian side does not adhere to the ceasefire and has continued shelling both Mariupol itself and its environs.”

A Russian Defense Ministry spokesman later announced the assault was back on, citing “the unwillingness of the Ukrainian side to … extend the ceasefire”.

The siege came as Russian forces inched closer to the capital, Kyiv, in an assault that has become ever more indiscriminate — and deadly.

Working-class towns such as Bucha and Irpin are in the line of fire, and air raids Friday broke many people’s resolve to stay.

“They are bombing residential areas — schools, churches, big buildings, everything,” said accountant Natalia Dydenko, glancing back at the destruction she was leaving behind.

Dozens of civilians have been killed in the northern town of Chernihiv. Those remaining live in craters or among ruins.

“There were corpses all over the ground,” a man who gave his name only as Sergei told AFP, as air raid sirens wailed. “They were queueing here for the pharmacy that’s just there, and they’re all dead.”

AFP reporters saw scenes of devastation — despite Moscow’s insistence it is not targeting civilian areas.

A defiant Zelensky said Saturday that Ukrainian forces were counterattacking around Kharkiv, the country’s second largest city, inflicting “such losses on the invaders that they have not seen even in their worst dream”.

Kuleba was equally defiant, saying, “Ukraine is bleeding, but Ukraine has not fallen, and stands both feet on the ground.”

He added: “The myth of the unbeatable and almighty Russian army is already ruined.”

But Moscow has so far seized only two key cities — Berdiansk and Kherson on Ukraine’s southern Black Sea coast.

Capturing Mariupol, however, would severely limit Ukraine’s maritime access and allow Russian forces to connect by land with troops from annexed Crimea and the Donbas.

The Kremlin said it was waiting for a third round of talks with Ukraine in Belarus.

The new talks would take place Monday, the Ukrainian side said.

The war has had serious global economic impacts, and the IMF warned on Saturday that its effects would be “all the more devastating” should the conflict escalate.

Russia’s business and other contacts with the West have been steadily cut. Moscow has suspended all flights by flagship carrier Aeroflot, effective Tuesday.

In Washington, some lawmakers have urged President Joe Biden to take tougher measures, including banning Russia’s oil imports — though the administration is wary of seeing high fuel prices rise further.

With fears growing of direct conflict between Nato and Russia — both nuclear-armed — the US and Moscow have set up a new direct phone line to reduce the risks of “miscalculation”, the Pentagon said Friday.

US General Mark Milley, chairman of the joint chiefs of staff, became the latest Western figure to rule out a no-fly zone, saying it would mean taking on Russian air forces — something, he said in Riga, that neither Nato nor member state leaders are interested in.

Russian authorities have imposed a news blackout and multiple media outlets have halted operations. Twitter was restricted and Facebook blocked in Russia.

A host of news outlets including the BBC and Bloomberg News said they were suspending work in Russia after a new law there imposes fines and jail terms of up to 15 years for publishing “fake news” about the army.

CNN said it would halt broadcasting in Russia, while independent Russian newspaper Novaya Gazeta said it would remove Ukraine content.

The Kremlin on Saturday defended the new law, saying it was necessary as the country was facing “an unprecedented information war”.

Putin has been unmoved as Russia has become isolated in economic, sporting and cultural fields.

But that did not stop tens of thousands of people from taking to the streets of Western cities from London to New York to Prague to protest against the invasion.