Top US diplomat Blinken in Moldova amid Ukraine refugee crush 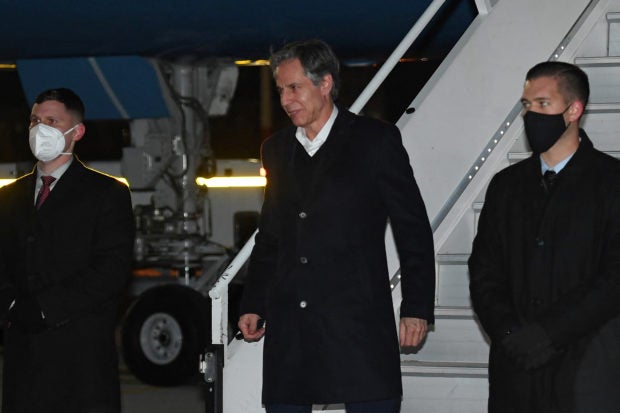 US Secretary of State Antony Blinken (C) disembarks his plane upon arrival to Chisinau, Moldova on March 5, 2022. AFP

CHISINAU, Moldova — US Secretary of State Antony Blinken arrived in Moldova Saturday to show US support as it faces a surge of refugees from Ukraine and fears it too could come under threat from Moscow.

Blinken is expected to provide reassurances for the small country, which has been fractured by a pro-Moscow breakaway region, Transnistria, on Ukraine’s western border. Some analysts believe that territory could be used as a staging point in the Russian military’s invasion of Ukraine.

Tens of thousands of refugees have streamed into Moldova, one of Europe’s poorest countries, straining its social services.

Hours before his arrival, Blinken visited the border of Ukraine in Poland, which has taken in 700,000 Ukrainians fleeing the war.

Blinken told the Poles that Washington was seeking $2.75 billion to help address the humanitarian crisis created by Moscow’s attack on Ukraine.

The war has given new impetus to Moldova’s hopes of joining the European Union.

The government formally submitted a request to join the bloc on Thursday, along with Georgia.

From the capital Chisinau, “you can hear the nose of the bombs across the border”, she said.