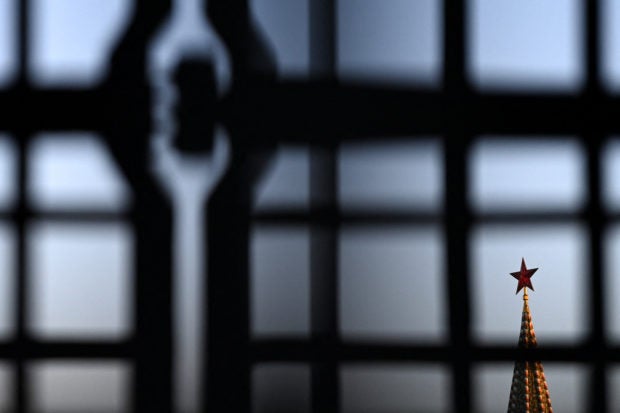 The ruby star atop the Kremlin’s Spasskaya tower is seen through part of a lattice of the Nikolsky Gate in central Moscow on March 2, 2022, after Red Square was closed to the public. AFP

MOSCOW — Over 4,600 people in cities across Russia were detained at protests on Sunday against Moscow’s military operation in Ukraine, a monitor said, on the 11th day of the invasion.

A police spokeswoman said 1,700 people were detained in Moscow after around 2,500 took part in an “unsanctioned protest”, while 750 were detained at a smaller rally of around 1,500 people in the second largest city of Saint Petersburg, Russian news agencies reported.

OVD-Info, which monitors detentions at opposition protests, put the figure of detainees in 65 towns and cities across Russia at 4,644 people.

It said police had used electric shockers on protesters.

It also posted witness photos and videos on Telegram messenger service showing riot police beating protesters with batons and demonstrators with blood running down their faces.

Memorial, Russia’s most prominent rights group, said that one of its leading activists, Oleg Orlov, was detained on the capital’s Manezhnaya square as he held a placard.

Svetlana Gannushkina, another veteran rights campaigner who has been tipped as a potential Nobel Prize winner, was detained in Moscow on the day of her 80th birthday.

A police van carrying a group of detainees to a police station overturned in a road traffic accident, injuring nine, six of them members of the public, city police said.

In the second largest city of Saint Petersburg, with large numbers of riot police patrolled outside Gostiny Dvor, a building in the city centre where protesters usually gather.

These protests came after hundreds were detained at demonstrations further east, such as in the Siberian city of Novosibirsk and in Yekaterinburg in the Urals.

Russian police on Friday had warned that all attempts to hold illegal demonstrations on Sunday would be “immediately suppressed” and organisers and participants would face charges.

The latest detentions brought the total number of demonstrators held to more than 10,000 since February 24, when President Vladimir Putin ordered troops into Ukraine to carry out a “special operation”.

Despite the official crackdown on demonstrations, and protesters facing jail terms, there have been daily protests since then.

On Friday, jailed Kremlin critic Alexei Navalny urged supporters to stage protests on Sunday “on all the central squares of Russia and all the world”.

He has called for Russians to hold daily protests, saying they should not become a “nation of frightened cowards”.

Putin on Friday signed into law a bill introducing jail terms of up to 15 years for publishing “fake news” about the Russian army.

Police in the Kemerovo region in the Urals fined a man 60,000 rubles ($624) for calling for people to demonstrate against the “special operation to demilitarize Ukraine”, state news agency RIA Novosti reported, saying this was the first known use of the new legislation.