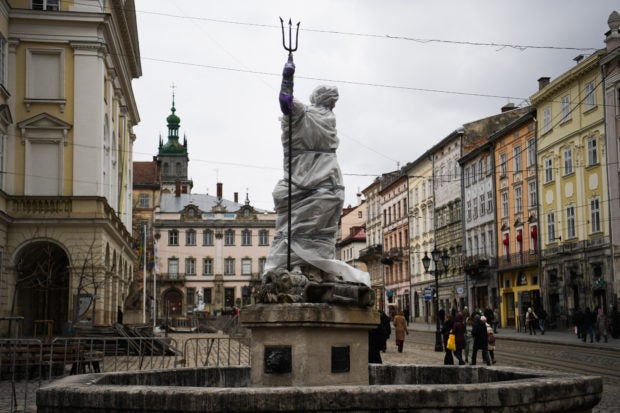 Pedestrians walk past a wrapped statue next to the Archcathedral Basilica of the Assumption of the Blessed Virgin Mary also known as Latin Cathedral in Lviv western Ukraine, on March 5, 2022. AFP

LVIV — Statues wrapped in foam and fireproof material can be seen all around the historic city of Lviv, where the race is on to protect cultural treasures against possible Russian bombardment.

In the western Ukrainian city’s Market Square, only a trident can be seen sticking out from a statue of Neptune — the Roman god of the seas — that is entirely covered in a plastic sheeting.

“I got some money, gathered a team and bought some material,” said Andriy Salyuk, head of the Society for the Protection of Monuments, and one of the main drivers behind the protection effort.

Volunteers have joined up with city workers and builders in the movement to defend the rich heritage of Lviv, a city of 700,000 people whose center is on the Unesco World Heritage List.

Salyuk said he was moved to act when an art historian “told me that if there was a bombing, God help us, we could lose the stained glass windows!”.

‘We can’t do everything’

Speaking to AFP in an office decorated with Ukrainian flags and the colors of various battalions fighting in eastern Ukraine, he said he has received donations from wealthy benefactors.

The effort has brought together an unlikely coalition, including construction companies which have advised on the best material to use to protect the stained glass windows of various churches.

At the Cathedral Basilica of the Assumption, which dates back to the 14th century, Andriy Pochekva was overseeing the installation of one such panel.

“We cannot protect from a direct impact but we are trying as much as possible to protect from light damage, whether it’s a fire or a shockwave or small fragments,” he said, as a crane manoeuvred the panel into position.

On one side of the cathedral, a large sculpture of the Holy Sepulchre has already been covered up under the watchful eye of Liliya Onishchenko from the city’s cultural heritage protection department.

“I have devoted my entire life to defending cultural heritage,” the 66-year-old told AFP.

“I do not want to see the results of our work destroyed by the war,” she said.

In another part of the city, she said a recently restored wooden altar from the 14th century in an Armenian church has been dismantled and placed under protection “like the First World War”.

Onishchenko said that museums in the city have also been storing away their exhibits for safekeeping.

After protecting “the most fragile objects”, Salyuk said he wanted to pass on to the next stage.

“People ask what we are going to do with the works of art inside the churches. We would love to help them, to coordinate, but we can’t do everything.”