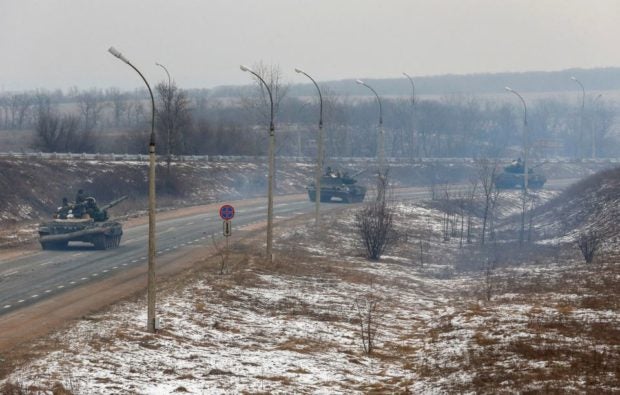 Service members of pro-Russian troops in uniforms without insignia drive tanks during Ukraine-Russia conflict on the outskirts of the separatist-controlled city of Donetsk, Ukraine March 5, 2022. REUTERS

Russia warned that oil prices could surge to $300 a barrel and it might close the main gas pipeline to Germany if the West halts oil imports over the invasion of Ukraine as peace talks made little progress.

*Oil prices soar as U.S. says it may go alone on import ban

* The World Bank approved $723 million in loans and grants for Ukraine to be transferred in the next few days.

Russian negotiators said they did not have positive developments to report following talks with Ukraine and warned not to expect the next round to bring a final result. The talks “are not easy,” Vladimir Medinsky said.

Ukraine’s negotiator Mykhailo Podolyak said some small progress had been made on agreeing logistics for the evacuation of civilians, but no agreement was reached that significantly improves the broader situation.

A fourth round will take place very soon, Russia said. The Russian and Ukrainian foreign ministers are expected to meet in Turkey on Thursday.

As many as 5 million Ukrainians could flee the country if Russia’s invasion continues, the EU’s top diplomat said, while the United Nations’ refugee agency said over 1.7 million have left so far.

The United States and its allies at a UN meeting urged Russia to allow safe passage for civilians stuck in areas of active hostility.

*’No war’ protests in Russia

Police detained 5,020 people at Russia-wide protests against the invasion of Ukraine, according to an independent monitoring group.

* Putin rules out conscripts for Ukraine

Russia will not use any conscripted soldiers in Ukraine, President Putin said.

“In Ukraine rivers of blood and tears are flowing. This is not only a military operation but a war which is leading to death, destruction and misery,” said Pope Francis, rejecting Moscow’s term “military operation.”