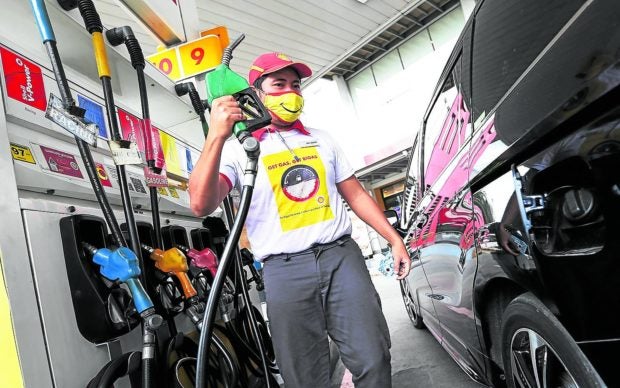 MANILA, Philippines — There is no legal impediment that would stop the executive department from suspending the collection of fuel excise taxes in order to cushion the impact of rising oil prices, Senate Minority Leader Franklin Drilon said Tuesday.

“We are not seeking an exemption from taxes here, and therefore a strict construction of the law is misplaced,” Drilon said in a statement, referring to the Tax Reform for Acceleration and Inclusion (TRAIN) law.

“Filipinos are suffering. The burden should be borne by the government. The government cannot just stand and hide behind the law to say that there is nothing that can be done. We cannot wait for the law to be amended before we act. The situation is changing rapidly by the day and we need to act fast,” he added.

Drilon, a former justice secretary, said no law is precluding the Department of Finance (DOF) and the Bureau of Internal Revenue (BIR) from recommending the collection of excise taxes on fuel imports.

“There is no stopping the executive, specifically the Department of Finance (DOF) and the Bureau of Internal Revenue (BIR), from suspending the collection of excise taxes on petroleum products, if they really want to mitigate the impact of high oil prices on the cost of goods and living expenses of the ordinary Filipino,” he said.

“They implement the law. Who will blame DOF and BIR if they suspend the excise taxes on fuel products? Who will file a case against them? Whose rights will be violated if the taxes are suspended? Please stop hiding behind the law. The TRAIN law does not intend to tie the hands of the government and prevent it from responding to shocking increases in oil prices to the detriment of consumers,” he added.

The senator said this as local pump prices of fuel products are expected to shoot up again this week. He noted tha gasoline prices are expected to increase by P3.50 to P3.70 per liter while diesel may go up by P5.30 to P5.50.

In the event that Dubai crude reaches $120 per barrel, the Department of Energy estimates that gasoline prices may rise to P78.33 per liter, while diesel may leap to P68.97 per liter, Drilon said.

“The provision of the TRAIN law should be interpreted liberally, not just in light of suspending the increases in excise taxes but also its imposition. We are in an extraordinary situation. It is a situation which calls for the liberal application of the law and for compassion,” Drilon said.

Drilon pointed out that the law recognizes that if the price of oil per barrel exceeds $80, the government has the power to intervene to cushion its impact on the economy and consumers.

“The intention of the TRAIN law is to give the DOF power to arrest possible inflation,” he said.

The TRAIN law, Drilon said, provides for the suspension of the excise hikes during the period 2018 to 2020 when the price of oil per barrel exceeds $80. The last increase on fuel excise tax was completed in 2020 but the price of oil has continued to rise since, he added.

“Clearly, the spirit of the law is to give the government elbow room to address situations where the price of crude oil in the world market exceeds 80USD,” he said.

“The law acknowledges that such a scenario will drive inflation to unconscionable levels – a scenario which we want to prevent, mitigate and arrest,” he added.

He further said that under the TRAIN law, the DOF also “may recommend the implementation or suspension of the excise tax on fuel” based on an annual review.

He further pointed out that DOF wants to suspend the collection of taxes, it can and it has done so in the past.

Drilon recalled that in 2021, the BIR suspended the imposition of the 12-percent value-added tax (VAT) on exporters’ purchases following objection from exporters, domestic suppliers and stakeholders, with the BIR qualifying however, that the postponement is due to the COVID-19 pandemic.