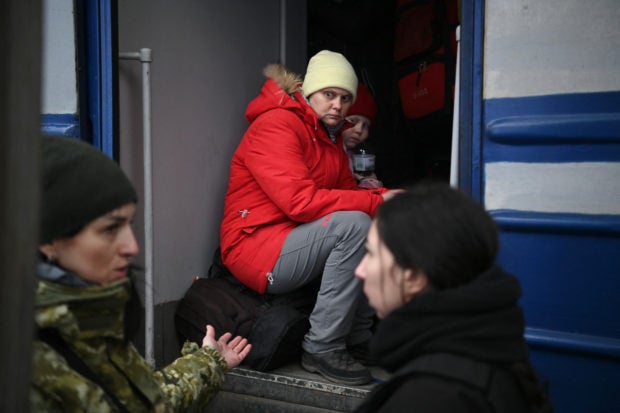 People sit on a corridor as they have no space in a train which prepares to depart from a station in Lviv, western Ukraine, enroute to Poland, on March 3, 2022. AFP

KYIV — Russia said Monday it would open humanitarian corridors for civilians to flee pummeled Ukrainian cities, but Kyiv accused Moscow of making it impossible for innocent people to escape.

The latest offer brought a glimmer of hope for terrified civilians cowering under a hail of Russian shelling and mortar fire, with numerous women and children among the hundreds already killed.

Russia’s defense ministry said it would open the corridors from 0700 GMT Tuesday, subject to Ukraine’s approval, listing routes from Kyiv as well as the cities of Mariupol, Kharkiv and Sumy — all of which have been under heavy attack.

Ukraine did not initially respond to the offer, with President Volodymyr Zelensky instead accusing Moscow’s troops of scuppering evacuation efforts — mining roads and destroying buses meant to carry people to safety.

Kyiv had rejected a previous proposal for evacuation corridors from the same four cities, as many of the routes led straight into Russia or its ally Belarus.

Addressing the Security Council, the UN’s top humanitarian official Martin Griffiths said civilians must be allowed to leave in the direction they wish, and safe passage be granted for vitally needed humanitarian and medical supplies.

The carnage continued on day 12 of the war, with 13 people killed in shelling on an industrial bakery in the town of Makariv and the mayor of the town of Gostomel killed while delivering bread to civilians.

According to the latest tally from the Office of the UN High Commissioner for Human Rights, which believes the real figures to be “considerably higher”, 406 civilians have died since the start of Russia’s assault on its ex-Soviet neighbour.

The invasion ordered by President Vladimir Putin has pushed more than 1.7 million people across Ukraine’s borders in what the UN calls Europe’s fastest growing refugee crisis since World War II.

International sanctions intended to punish Moscow have done little to slow the invasion, and energy-hungry Western nations are still weighing whether to ban Russian oil imports.

The conflict pushed oil prices to a near 14-year high, while gas prices also rocketed and stock markets around the world plunged.

Outgunned Ukrainian forces have been trying to hold back Russian troops pushing up from the east and south in an attempt to encircle the capital Kyiv.

AFP journalists witnessed thousands of civilians on Monday fleeing fighting via an unofficial escape route from Irpin, a suburb west of Kyiv, towards the capital.

A day earlier eight people died there in shelling, Ukrainian officials said. Images of the killing of one family of four shocked the world.

“There was firing on all sides when we were on the road, but we got across,” Tetyana, 51, told AFP after crossing icy water on a rickety plank, over which thousands have fled Russian bombardment.

“I told myself that if I was killed on the spot, so be it, but if I’m wounded, I’ll have to crawl,” she said.

Children and the elderly were carried on carpets used as stretchers on the route, which leads over the makeshift bridge and along a single path secured by the army and volunteers.

Desperate people abandoned pushchairs and heavy suitcases to cram on buses out of the war zone.

“We had no light at home, no water, we just sat in the basement,” Inna Scherbanyova, 54, an economist from Irpin, told AFP.

“Explosions were constantly going off… Near our house there are cars, there were dead people in one of them… very scary.”

One Ukrainian paratrooper told of “hand-to-hand” combat in Irpin, saying “we are trying to push (Russian soldiers) out, but I don’t know if we’ll be fully able to do it”.

Two recent attempts to allow some 200,000 civilians to leave the besieged Azov Sea port of Mariupol have also ended in disaster.

Refugees trying to escape the city using agreed escape routes were left stranded as the road they were directed towards was mined, the ICRC said on Monday.

On the European front, meanwhile, EU foreign policy chief Josep Borrell said the conflict could drive five million Ukrainian refugees into the roads “if the indiscriminate bombardments of cities continues”.

Ukraine’s Zelensky renewed calls for the West to boycott Russian exports, particularly oil, and to impose a no-fly zone to stop the carnage.

“How many more deaths and losses must it take to secure the skies over Ukraine?” the president said in a video message.

While NATO countries have pumped weapons into Ukraine, they have so far rebuffed Ukraine’s calls for a no-fly zone, fearing a widening war against nuclear-armed Russia.

Western allies have instead imposed unprecedented sanctions against businesses, banks and billionaires in a bid to choke the Russian economy and pressure Moscow to halt its assault.

But the leaders of Germany, Britain and the Netherlands warned Monday against a ban on Russian oil, saying it could put Europe’s energy security at risk.

US President Joe Biden’s spokeswoman said no decision had been taken, while Russian Deputy Prime Minister Alexander Novak warned any oil ban would have “catastrophic consequences” on prices.

Meanwhile, Moscow has been forced to restrict sales of essential goods to limit black market speculation, while a stream of foreign companies halted business in Russia.

While Japanese casualwear giant Uniqlo defended its decision to stay, calling clothing “a necessity of life”, US jeans brand Levi’s became the latest to join the exodus.

“I came to buy my favourite brands one last time,” 19-year-old student Filippova told AFP at a mall in Moscow.

Putin has equated sanctions with a declaration of war and put nuclear forces on alert, pledging the “neutralisation” of Ukraine “either through negotiation or through war”.

Despite harsh punishments for those voicing dissent, protests in Russia against the Ukraine invasion have continued, with more than 10,000 people arrested since it began.

The International Court of Justice meanwhile heard Ukraine’s appeal for it to order Russia to halt the fighting, but Moscow declined to attend the sitting of the UN’s top court, in The Hague.