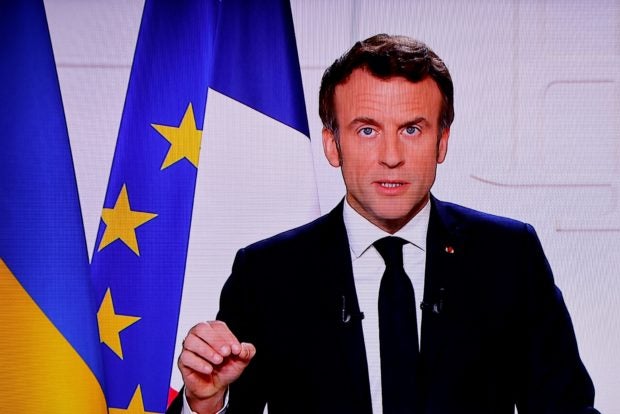 A picture of a monitor taken in a media control room in Paris on March 2, 2022, shows French President Emmanuel Macron speaking from the Elysee Palace during a televised address on the general situation seven days after Russia launched a military invasion on Ukraine. AFP

PARIS — French President Emmanuel Macron on Monday accused his Russian counterpart Vladimir Putin of hypocrisy and cynicism after Moscow announced humanitarian corridors to evacuate civilians from several Ukrainian cities, but only to Russia or Belarus.

“All this is not serious, it is moral and political cynicism, which I find intolerable,” Macron told LCI television.

Promises to protect civilians only so they could flee towards Russia were “hypocritical”.

“I do not know many Ukrainians who want to go to Russia,” he added, saying full ceasefires to protect civilians were needed rather than corridors.

Moscow announced the proposed escape routes from Kharkiv, Kyiv, Mariupol and Sumy after Putin and Macron spoke by telephone on Sunday, saying the move was taken after a “personal request” by Macron.

But the Elysee Palace said no such request had been made and Macron described Moscow’s announcement as a “PR stunt”.

The situation was worsening by the day, he warned.

There are four active nuclear plants in the country as well as the Chernobyl facility that was the site of the 1986 nuclear disaster.

But Macron also insisted that “France is not at war with Russia”, adding that “what we want is to stop this war without becoming belligerents ourselves”.

Macron spoke to Putin on Sunday for one hour and 45 minutes, the fourth time they had spoken since the Russian invasion of Ukraine on February 24.

Russia would reach its objectives in Ukraine “either through negotiation or through war”, Putin told Macron according to a French presidential official, adding the Russian president also pledged “it was not his intention” to attack Ukrainian nuclear sites.

Later Monday, Russia announced a ceasefire in several Ukrainian cities including Kyiv, Mariupol and Sumy from 0700 GMT Tuesday, so civilians could be evacuated to Russia or other parts of Ukraine via humanitarian corridors.

In comments later Monday, Macron warned it was unlikely Russia and Ukraine would be able to find a way to end the war in the days and weeks ahead.

“In the short term… the war is going to continue to be waged,” he told journalists during a visit to Poissy, not far from Paris.

“I don’t think that, in the coming days and weeks, there will be a real negotiated solution,” he added.

“Talks are difficult with Putin because he refuses a ceasefire,” which was a precondition of any real talks between Russia and Ukraine, said Macron.

“Our responsibility” was to keep talking to the Russian and Belarusian people as well as their leaders and to “always respect Russia as a country” if there was to be any lasting peace.

“We are all full of admiration for the resistance of the Ukrainian people, their leaders and their president,” he added.

Macron also said France would play its part in welcoming Ukrainians fleeing the war, and might also take steps to help relieve the pressure from Ukraine’s neighbour Moldova, which has taken in more than 80,000 refugees.