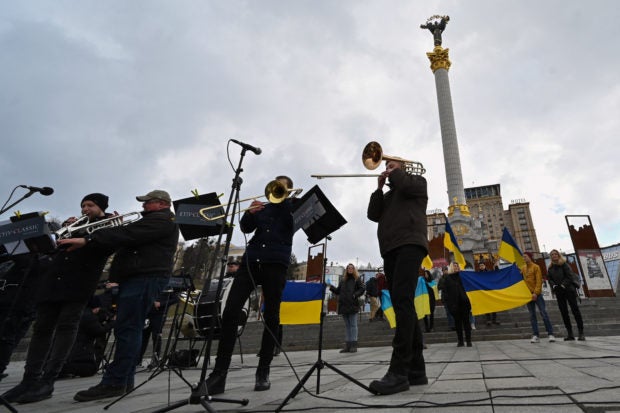 Spectators hold the Ukrainian flags as Musicians of the Kyiv-Classic Symphony Orchestra under the direction of conductor, UNESCO Peace Artist Herman Makarenko perform at Independence Square in Kyiv, on March 9, 2022 to call NATO to close the skies over Ukraine. AFP

Fears are mounting the capital will be encircled, with AFP seeing Russian troops pressing closer as an orchestra played Europe’s anthem “Ode to Joy” in Kyiv’s central square to boost morale.

A Russian air strike severely damages a children’s hospital in the besieged southern port of Mariupol, injuring 17, according to preliminary figures.

Power is entirely cut to the Chernobyl power plant, site of the world’s worst nuclear disaster in 1986.

The UN nuclear watchdog IAEA, warns the plant, now in Russian hands, is no longer transmitting data but says it sees no “critical impact on safety”.

Moscow and Kyiv agree a 12-hour ceasefire to allow civilians to flee five badly battered areas including around the capital, with 5,000 making it out of Sumy near the Russian border.

Others hope to escape what the Red Cross calls the “apocalyptic” situation in Mariupol, which has been without water and power for nine days.

At least 10 people are killed after Russian military “opened fire” on homes and other buildings in the eastern Ukrainian town of Severodonetsk, a local official says.

Moscow accuses Washington of “declaring economic war” after the United States bans Russian oil imports, with Britain saying it will do the same by the end of this year, and the European Union slashing gas imports by two-thirds.

But no fighter jets, says US

Fearing a wider conflict, the Pentagon rejects a Polish offer to deliver its Russian-made MiG-29 fighter jets to a US base in Germany, to be eventually handed over to Ukraine.

US lawmakers are voting on a $14-billion aid package for Ukraine with Canada pledging more military equipment.

Russian and Ukrainian foreign ministers will hold face-to-face talks in southern Turkey on Thursday in the first high-level contact since the invasion.

The EU adds 14 more Kremlin-linked Russian oligarchs and more than 146 senators to its sanctions blacklist, tightens controls on cryptocurrency transfers and targets Russia’s maritime sector over the war in Ukraine.

The Russian army admits for the first time that conscripts are taking part in Moscow’s military advance in Ukraine, after Putin vowed only professional soldiers were there.

The UN says 143,000 fled Ukraine in the last 24 hours, with the total number of refugees topping 2.15 million — and more than half of those in Poland.

Oil prices tumble while US and European stocks surge after days of market turmoil over Russia’s invasion of Ukraine.