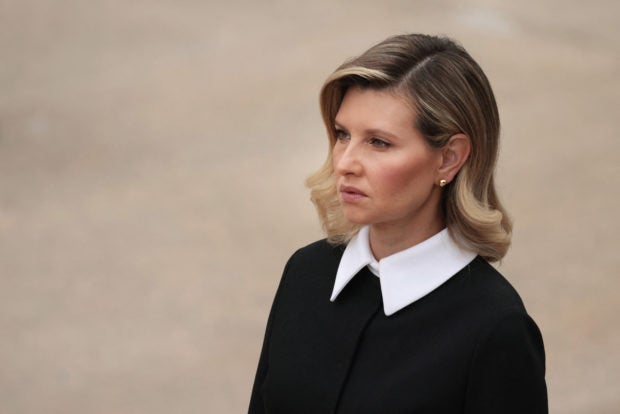 Olena Zelenska looks on as her husband, Ukrainian President Volodymyr Zelensky participates in an Armed Forces Full Honor Wreath Ceremony at the Tomb of the Unknown Soldier at Arlington National Cemetery on September 1, 2021 in Arlington, Virginia. AFP FILE PHOTO

KYIV — The First Lady of Ukraine, Olena Zelenska, on Tuesday condemned the Kremlin’s “mass murder” of civilians, including children, in an open letter to the global media on the Russian invasion.

In a passionate statement, Zelenska said that Russia’s invasion of Ukraine “was impossible to believe.

“On February 24th, we all woke up to the announcement of a Russian invasion,” she wrote.

“Despite assurances from Kremlin-backed propaganda outlets, who call this a ‘special operation’ — it is, in fact, the mass murder of Ukrainian civilians.”

She singled out the child casualties as “perhaps the most terrifying and devastating”, naming several of those killed.

“Eight-year-old Alice… died on the streets of Okhtyrka while her grandfather tried to protect her,” she said. “Polina from Kyiv… died in the shelling with her parents.”

She added: “14-year-old Arseniy was hit in the head by wreckage, and could not be saved because an ambulance could not get to him on time because of intense fires.

“When Russia says that it is ‘not waging war against civilians,’ I call out the names of these murdered children first,” she said.

President Volodymyr Zelensky has been hailed for his wartime speeches, and Zelenska has a background in writing for his comedy production company.

Her message focused on the suffering of the civilian population as millions have fled their homes to escape the Russian military assault.

“This war is being waged against the civilian population, and not just through shelling,” she stressed.

“Our roads are flooded with refugees,” she said.

“Look into the eyes of these tired women and children who carry with them the pain and heartache of leaving loved ones and life as they knew it behind.”

“How easy is it to inject insulin in the basement? Or to get asthma medication under heavy fire?” she asked.

“Not to mention the thousands of cancer patients whose essential access to chemotherapy and radiation treatment has now been indefinitely delayed.”

She called for “those in power to close our sky”. Nato has ruled out a no-fly zone.

Zelenska, 44, has two children with her husband, a former comedy actor.

She has spearheaded a campaign for better school meals and has accompanied Zelensky on international trips, meeting Prince William and his wife Catherine in Britain in 2020.

The Ukrainian presidency did not immediately respond to a question as to whether Zelenska is now in Kyiv.