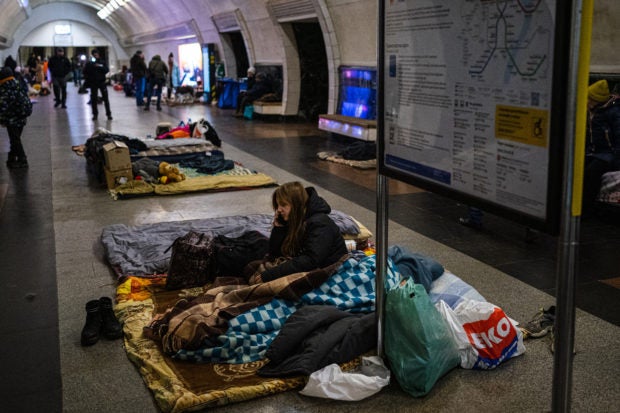 A woman makes a call to relatives in a underground metro station used as a bomb shelter in Kyiv on March 8, 2022. AFP

President Joe Biden announces a ban on US imports of Russian oil, gas and coal, saying Ukraine will “never be a victory for Putin”.

Britain also says it will phase out Russian oil imports by the end of this year.

Poland is “ready” to hand its Mig-29 fighter jets to the United States, the foreign ministry says, under a scheme that would see the planes given to Ukraine.

Zelensky defiant, but nods to Russia

Separately, in a nod to Russia he says he is no longer pressing for NATO membership for Ukraine, one of the main bones of contention with Moscow.

Ukraine evacuates civilians from the northeastern city of Sumy under a deal with Moscow to hold fire and set up humanitarian corridors in cities besieged by Russian forces.

Two convoys ferry the evacuees to the city of Lokhvytsia, around 150 kilometres (93 miles) to the southwest in Ukrainian-held territory.

Kyiv and its Western allies had rejected a previous proposal to evacuate Ukrainians to Russia and Belarus.

Moscow announces a new humanitarian ceasefire in Ukraine for Wednesday morning to carry out the evacuation of the civilian population.

Russia proposes to agree the routes and start time of the humanitarian corridors with Ukraine “before 03:00 MSK on March 9”, Russian news agencies report.

Ukraine accused Russia of violating a Tuesday ceasefire in the southern port city of Mariupol, where civilians are trapped in “apocalyptic” conditions, according to the Red Cross.

The United States estimates between 2,000 and 4,000 Russian soldiers have been killed in the nearly two-week-old invasion. Russia has not given an update since March 2 when it announced 498 troops had been killed.

At least 21 people, including two children, were killed in air strikes on Sumy on Monday night, hours before the evacuations began.

Thousands attempt to board packed trains out of Odessa, Ukraine’s main port which is also bracing for attack.

Three adults were killed and three children wounded when an anti-personnel mine exploded under their car on a road in the Chernigiv region north of Kyiv, Ukraine’s ombudsman said.

The BBC announces that it is resuming English-language broadcasting from Russia, after suspending reporting as it examined tough new media laws imposed to muffle dissent over Moscow’s invasion.

Chinese President Xi Jinping urges “maximum restraint” over Ukraine but stops short of condemning the Russian invasion in a video summit with the leaders of France and Germany.

Fast-food giant McDonald’s says it is closing its 850 restaurants in Russia, joining a growing tide of companies pulling out of the country.