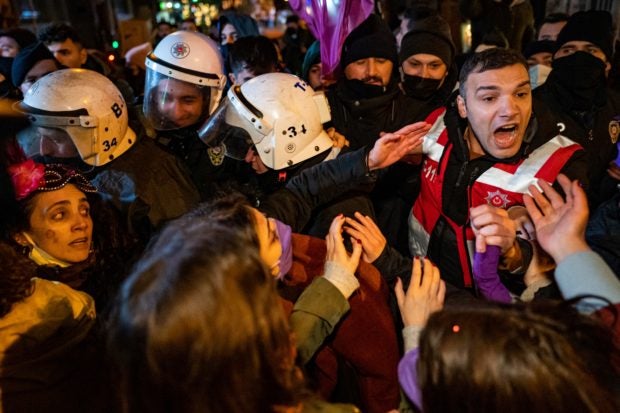 Women clash with Turkish anti-riot police as they push a police barricade during a march to Taksim Square to mark the International Women’s Day in Istanbul, on March 8, 2022. AFP

MADRID — Protesters took to the streets worldwide for International Women’s Day Tuesday with demonstrators clashing with police in Turkey and many rallies urging solidarity with war-torn Ukraine.

In Istanbul, where protesters were planning a rally against femicide, Turkish police blocked hundreds from reaching the central Istiklal Avenue.

But the demonstrators refused to be stopped, breaking through the barricades, whistling and waving “Feminist rebellion” banners, prompting police to fire tear gas to disperse them.

“Pathetic!” snarled one defiant protester called Hazan as they regrouped near the central Taksim Square.

“This is not something that will kill our struggle, the police will go but the feminists will remain.”

All eyes were on the unending stream of women and children fleeing Russia’s invasion of Ukraine, which has triggered Europe’s fastest-growing refugee crisis since World War II.

With more than two million people forced into exile, few of those arriving in the Polish border city of Przemysl could spare a thought to mark the date.

One lone priest could be seen wandering through the train station handing out red and yellow tulips to the arriving women.

“It’s the first time it feels like a special day!” said Lilia Kysil, a 22-year-old student from Ukraine’s capital Kyiv, a huge smile on her face as she stood with her mother and sister, thanking him.

At some checkpoints in war-torn Kyiv, volunteer soldiers were also handing out tulips to women passers-by, an AFP correspondent said.

In Madrid, some 30,000 protesters turned the city centre into a sea of purple, a Spanish government spokesman said.

A festive atmosphere was marked by rhythmic drumming and chanting as the masses waved banners against gender violence in a protest peppered with signs saying “No war”.

Thousands more rallied in Barcelona while in Paris a gathering of thousands began with the reading of a letter from Russian feminists urging activists to “take a stand against the war” which brought out “the violence of bullets but also sexual violence”.

And in Athens, some 2,000 people marched through the streets.

“Exploitation, war, violence: the only defence is the struggle for emancipation and equality,” read one banner.

Cries of “Femicide state!” and “Justice! Justice!” rang out in Mexico City where tens of thousands turned out to protest in a country where around 10 women are killed every day.

Some demonstrators threw paint balls at monuments while others toppled road signs and carried them on their shoulders through the capital, where several thousand police were deployed.

“The president says that he’s going to protect us but the truth is that he’s not doing anything,” said Camila Villeda, 13, who joined the march with her mother.

Further south, hundreds hit the streets of Guatemala’s capital calling for an end to violence and corruption, and demanding justice as they marked five years since 41 girls died in a fire at a state-run shelter.

And in South America, thousands of women also rallied across Argentina to reject sexual violence while thousands more turned out for colorful marches in the capitals of Colombia and Uruguay.

Chile’s future first lady, Irina Karamanos, whose partner Gabriel Boric takes office as president on Friday, was among the tens of thousands who marched in Santiago demanding greater equality.

“Democracy in the country, at home and in bed,” read a sign carried by Karamanos, 32, and other women who will be part of the incoming administration.

In Pakistan, some 2,000 women rallied in the eastern city of Lahore despite official efforts to bar the protest and withdraw security for an event frequently targeted by violence.

In a jovial atmosphere, they marched through the streets, chanting “Give respect to women” and “End the patriarchy” as another 1,000 women rallied in Karachi, Pakistan’s largest city, and 200 in the capital, Islamabad.

Such rallies have triggered a fierce backlash since they began four years ago in deeply conservative and patriarchal Pakistan where women have been shot, stabbed, stoned, burnt and strangled for damaging family “honour”.

Meanwhile, Afghanistan marked the day in muted fashion with activists cowed by the threat of arrest by the country’s Taliban rulers who swept back to power in August last year, rolling back decades of advances for women.

Squeezed out of government employment, they can no longer travel alone and must dress according to a strict interpretation of the Koran.

“If you care about women’s rights — anywhere in the world — you should be watching Afghanistan with deep alarm,” Heather Barr, of Human Rights Watch, told AFP on Tuesday.

And in Kenya, 150 people marched through the capital Nairobi calling for an end to gender-based violence after a woman was viciously attacked by motorcycle taxi drivers.

The incident occurred on Friday, with a viral video showing the men grabbing at the young woman’s clothes as she screamed inside her car.

Police arrested 16 people in connection with the assault.

‘Not just a woman’: Filipinas carve their niches, defy stereotypes

A woman’s place is out there