‘Not just a woman’: Filipinas carve their niches, defy stereotypes 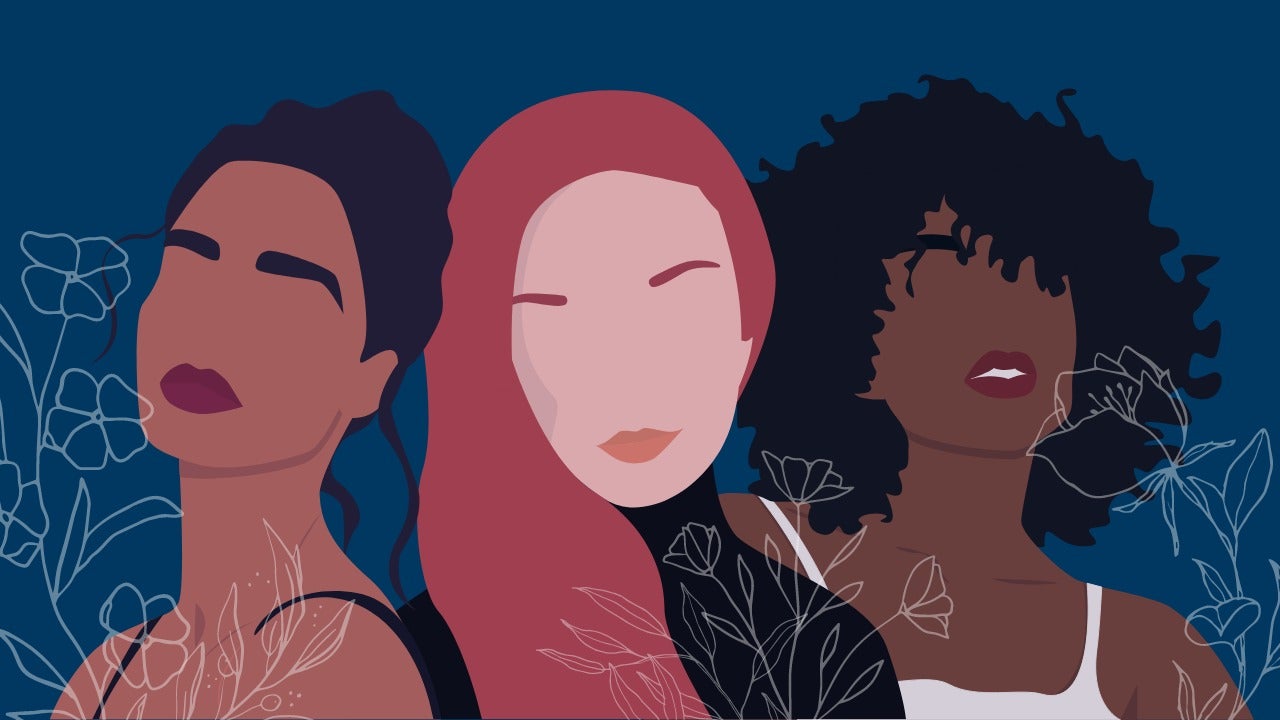 In 1977, the UN General Assembly adopted a resolution proclaiming a United Nations Day for Women’s Rights and International Peace to be observed on any day of the year by member states, in accordance with their historical and national traditions.

“Filipino women have been active in the struggle for national independence, for civil liberties, for equality of the sexes, and for human rights,” the proclamation stated.

“[I]t is but just and proper to declare a week and a particular day of the year as Women’s Rights and International Peace Day, in solidarity with the United Nations, and in commemoration of the struggle of Filipino women for national freedom, civil liberty, equality, and human rights,” it added.

The following year, through Republic Act No. 6949, the country finally declared the eighth day of March of every as National Women’s Day.

As the country observes the holiday this year and celebrates women who are making strides, defying stereotypes and making history every day in the Philippines and across the globe, INQUIRER.net will detail “HERstory” and highlight the achievements of every “Juana” throughout the years.

According to the Philippine Commission on Women (PCW), this year’s National Women’s Month Celebration (NWMC) aims to highlight the “gains achieved for women and girls, assess actions toward gender equality and look forward to steps that must be taken to ensure progress in empowering women.”

“With the country still reeling from the COVID-19 pandemic, studies and data show that the health crisis stalled movements toward gender equality, worsening inequalities, further exposing gender gaps, and exacerbating vulnerabilities in social and political, and economic aspects,” the PCW added.

Since 2017, the PCW has followed the same theme for the celebration of National Women’s Month—“WE Make CHANGE Work for Women.”

This year, however, the PCW raised the following questions: Did WE Make CHANGE Work for Women? How and to what extent? Moreover, the 2022 NWMC will also follow a sub theme: “Agenda ng Kababaihan, Tungo sa Kaunlaran.”

“It will be a celebration of women exercising their choices, taking chances to make their voices heard, and benefitting from and trailblazing changes,” said PCW.

“It is a celebration of Filipino women’s power to take the narrative, raise priority issues that matter to them, and call for concrete actions,” the commission continued.

“It will be a celebration of women exercising their choices, taking chances to make their voices heard, and benefitting from and trailblazing changes. It is a celebration of Filipino women’s power to take the narrative, raise priority issues that matter to them, and call for concrete actions,” it added.

The theme this year likewise highlights the sentiment of many Filipino women—and men—which could be summarized in a few words: “Babae [ka/ako], hindi babae lang.” (You are/I am a woman, not just a woman).

For the longest time, science, technology, engineering, and mathematics (STEM) has been male-dominated not only in the Philippines but across the globe. 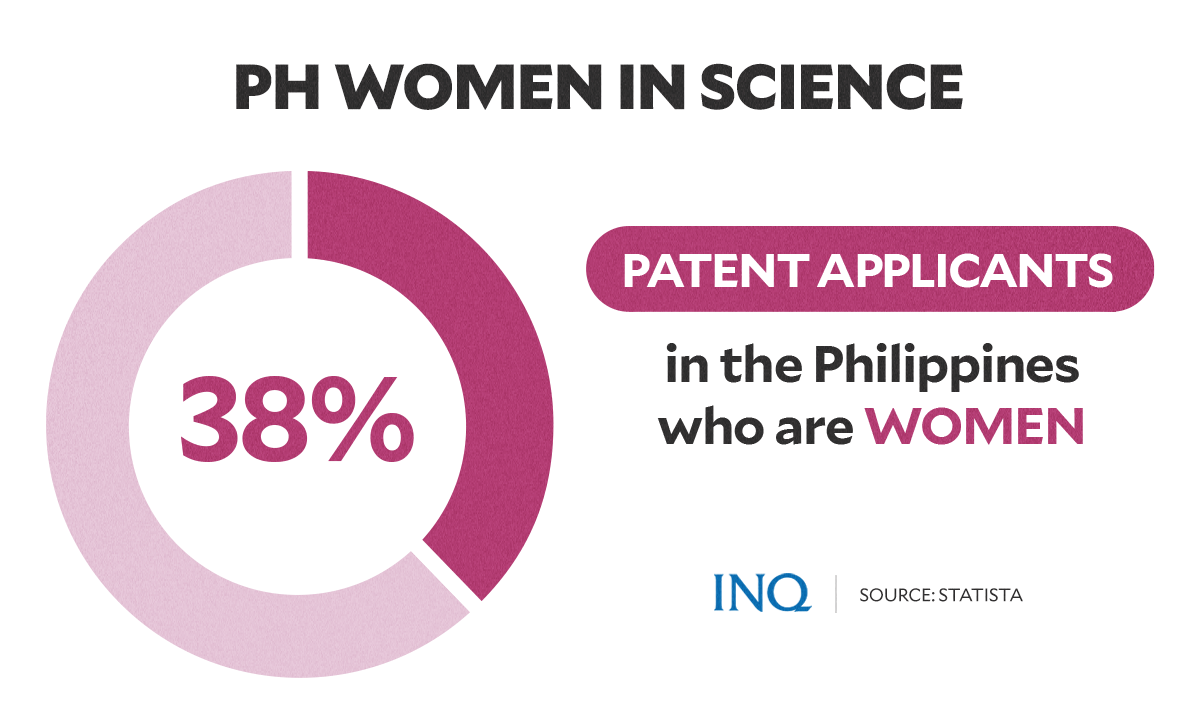 However, a recent analysis by consumer company Statista of data on female inventors, who had applied for international patents in several countries, showed that the number of women inventors has been increasing each year.

Last month, at the celebration of International Day of Women and Girls in Science, the Department of Science and Technology-Philippine Nuclear Research Institute (DOST-PNRI) paid tribute to five Filipina scientists who have made significant contributions to Nuclear Science. Among those who were recognized by the DOST-PNRI for their outstanding work in the male-dominated STEM field were:

The Philippine Science Heritage Center looked back and celebrated the wisdom and contribution of 11 Filipinas, who changed the game in the field of sciences in the country. Among these remarkable Filipino women include:

“Our people should rejoice that the WOMEN of this country are capable of such amazing patience and endurance which are without parallel in other countries in the world,” Alzona once said.

In the coming national and local elections, at least 14 women will try to secure a spot in the nation’s top positions—president, vice president, senator.

Of the 11 female candidates for president, vice president, and senator in 2016, only three were elected—Leni Robredo, Risa Hontiveros, and Leila de Lima.

In 2010, the numbers were higher, with 16 total female candidates for the top three government positions. Out of those, only two were successful.

This year, among the list of women running for president, vice president, and senator are:

Their decision to run for the country’s top seats came at a time when even the current President—Rodrigo Duterte—questioned the leadership skills of a woman and whether or not women can run the country. 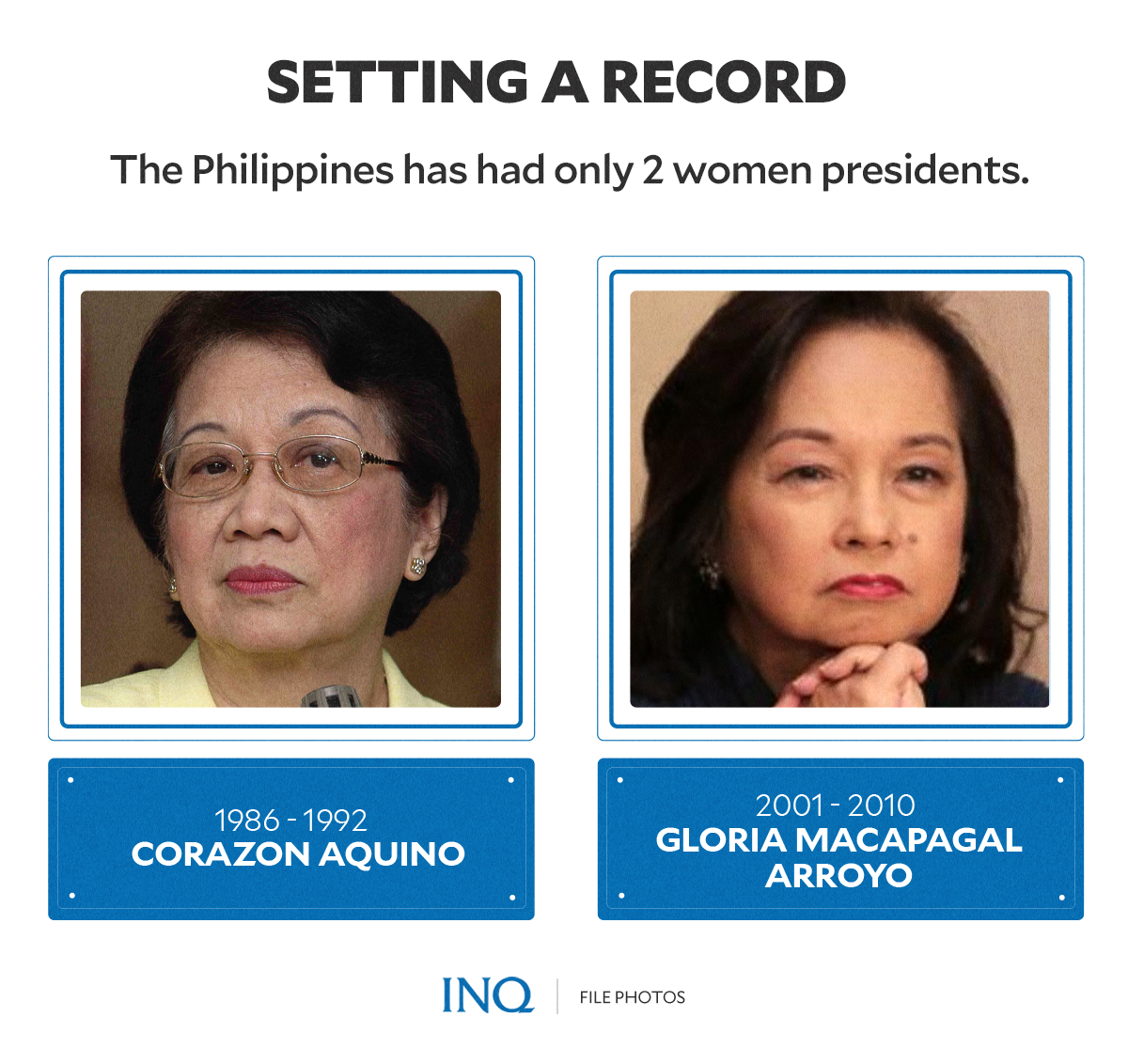 Last year, Duterte said that the presidency was no job for a woman.

“This is not for women. You know, the emotional setup of a woman and a man is totally different. You will become a fool here. So… that is the sad story,” said Duterte—who is known for his comments often deemed offensive, sexist and misogynistic,

READ: Duterte says presidency no job for a woman 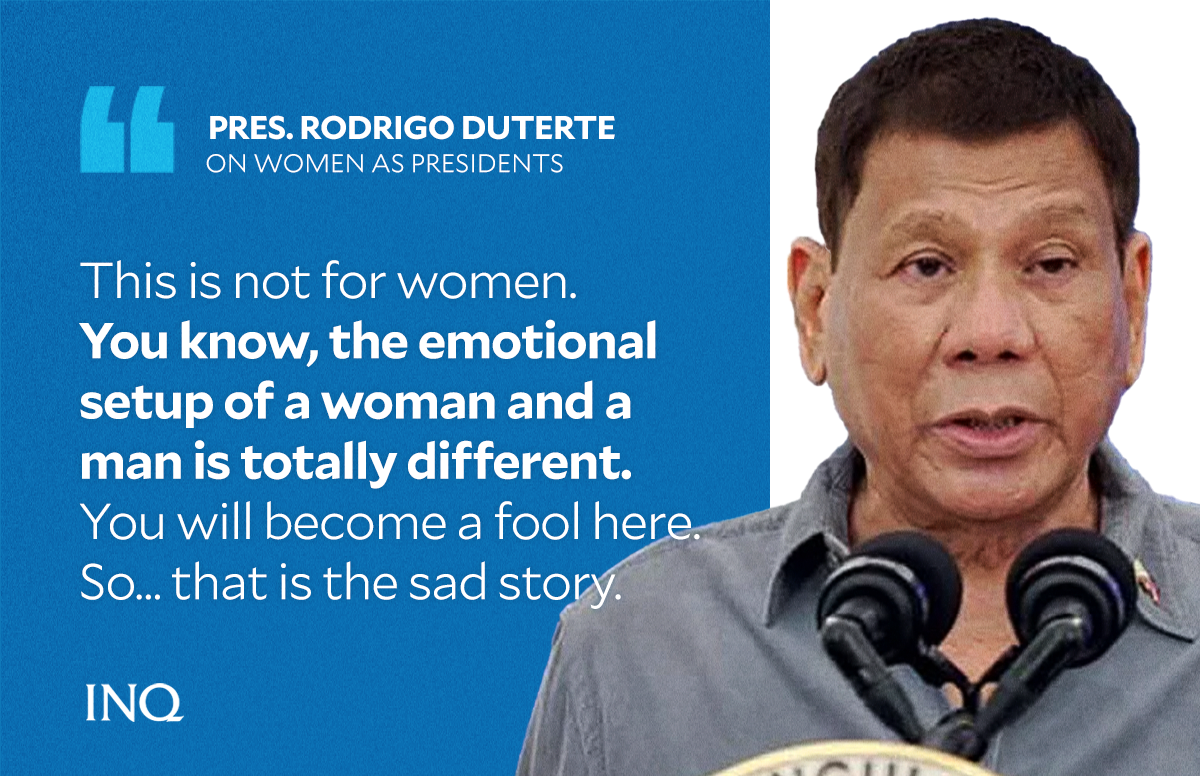 “I long for a time when we no longer need to remind the world that women are gifted,” said Robredo in a speech last March 7 during the Gobyernong Tapat, Kababaihan Angat event in Quezon City.

“We have a month to remind them of our greatness as women, but I hope that someday we no longer need to prove ourselves, to show evidence, that we are [as strong as our male counterparts],” Robredo said.

“I hope that no voter will choose not to vote for a candidate just because she is a woman,” she added.

Amid the COVID-19 pandemic, notable Filipino women have made headlines for their achievements and award-winning successes in different fields.

In July, weightlifting star Hidilyn Diaz delivered the country’s first Olympic gold ever, after lifting a record 127 kg in the clean and jerk during the 2021 Tokyo Olympics.

READ: ‘This proves we can do it:’ Hidilyn Diaz wins 1st Olympic gold for PH

Neshty Petecio, despite not being able to bring home a gold medal, likewise made history during the Tokyo Olympics as the first Filipino female boxer to medal in the Olympics.

Petecio ended up with the silver medal in the women’s featherweight final after Japan’s Sena Irie denied Petecio of gold as she beat the Filipino for the third time in four meetings since 2019–albeit a controversial victory.

Another Filipina athlete who competed in Tokyo Olympics, Margielyn Didal, made headlines due to her infectious energy which charmed the public.

In October last year, journalist Maria Ressa became the first Filipino to win the Nobel Peace Prize for defending freedom of the press and freedom of expression.

In 2020, the Philippine Nurses Association (PNA), the country’s 98-year-old professional nurses’ organization, awarded the Bayaning Nars award to 15 nurses—14 of whom have sacrificed their lives at the frontline of the fight against COVID-19.

The Bayaning Nars award recognizes “unsung hero nurses… who have done valiant, and extraordinary deeds that exemplify love of God and country, caring, and integrity beyond her call of duty,” the PNA said.

Among the awardees was Mary Lorraine Pingol, who shot to fame for helping a homeless woman give birth on a sidewalk that same year. She was the sole living recipient of the said award.

Three of the 14 nurses who were granted posthumous awards were women. They were:

READ: 15 ‘Bayaning Nars’: We need not die to be heroes

In June 2021, Duterte conferred the Order of Lapu-Lapu on Philippine General Hospital (PGH) health workers who led the evacuation of patients and newborn babies as fire hit the facility in May.

Among the health workers who received the Order of Lapu-Lapu were Kathrina Bianca C. Macababbad, Esmeralda E. Ninto, Phoebe Rose C. Malabanan—all of whom were nurses of PGH’s neonatal intensive care unit.

Overseas, several Filipinas have made their names in their respective fields or careers.

One of them was Rodelia Pedro Villar, a Filipina domestic helper from Western Visayas, who became the first-ever Filipina to clinch the Lion Rock People’s Choice award during the 8th Spirit of Hong Kong Awards in November 2020.

Villar was recognized for the support she provided to the domestic worker community through Domestic Workers Corner, a group she founded in 2017.

Villar has been staying in Hong Kong for more than 17 years. Through her group, she was able to assist fellow domestic helpers who were victims of romance scams, sexual harassment, and termination of contracts.

Last year, a Filipina nurse in the United Kingdom has been awarded a British Empire Medal in recognition of her outstanding work amid the COVID-19 pandemic.

Charito Romano, a staff nurse at the Arbrook House Care Home in the UK, was among those included in Queen Elizabeth II’s New Year’s honors list.

Filipina nurse Minnie Klepacz, who works as a matron for ophthalmology and leads the hospital’s Black Asian Minority Ethnic Network at the Royal Bournemouth Hospital, likewise received a British Empire Medal for her “tireless work to support her colleagues and community” during the COVID-19 pandemic.

Evelyn Tumalad, a Filipina English and AVID (Advancement Via Individual Determination) teacher at Clackamas High School, was named Oregon’s teacher of the year in Oct. 2021.

Most recently, Filipina filmmaker Martika Ramirez Escobar was given the Special Jury Prize for Innovative Spirit at the World Cinema Dramatic section for her film-within-a-film “Leonor Will Never Die.”

Escobar, through her directorial debut, became the first Filipino feature film director to win at the prestigious Sundance Film Festival, which was held online for the second year in a row.

Girls for STEM: An ecosystem of support and motivation Four podcasts to inspire women and girls to pursue scientific careers