MANILA, Philippines—For the longest time, and for many countries around the world, there has been a huge gender gap in Science, Technology, Engineering, and Mathematics (STEM) as well as in patenting activity worldwide—which resulted in more male inventors being awarded patents for their ideas or inventions.

However, as time passed by, female inventors slowly began to narrow the gender gap—and defy the stereotypes and barriers unfavorable to women who work in the STEM field.

According to consumer company Statista’s analysis of data by the World Intellectual Property Organization (WIPO), the share of female inventors who were among applicants for international patents in selected countries last year stood at only 17 percent.

READ: The Countries With the Most Female Inventors

A patent, as explained by the WIPO, “is an exclusive right granted for an invention, which is a product or a process that provides, in general, a new way of doing something, or offers a new technical solution to a problem.”

“To get a patent, technical information about the invention must be disclosed to the public in a patent application.”

A patent allows an inventor to have exclusive right to prevent or stop others from commercially exploiting the patented invention.

Data showed that the Philippines had the second highest share of female inventors who applied for international patents last year, next to Cuba.

Around 38 percent of patent applicants in the Philippines last year were female inventors, while there were 53 percent female inventors from Cuba who also applied for patents during the same year. 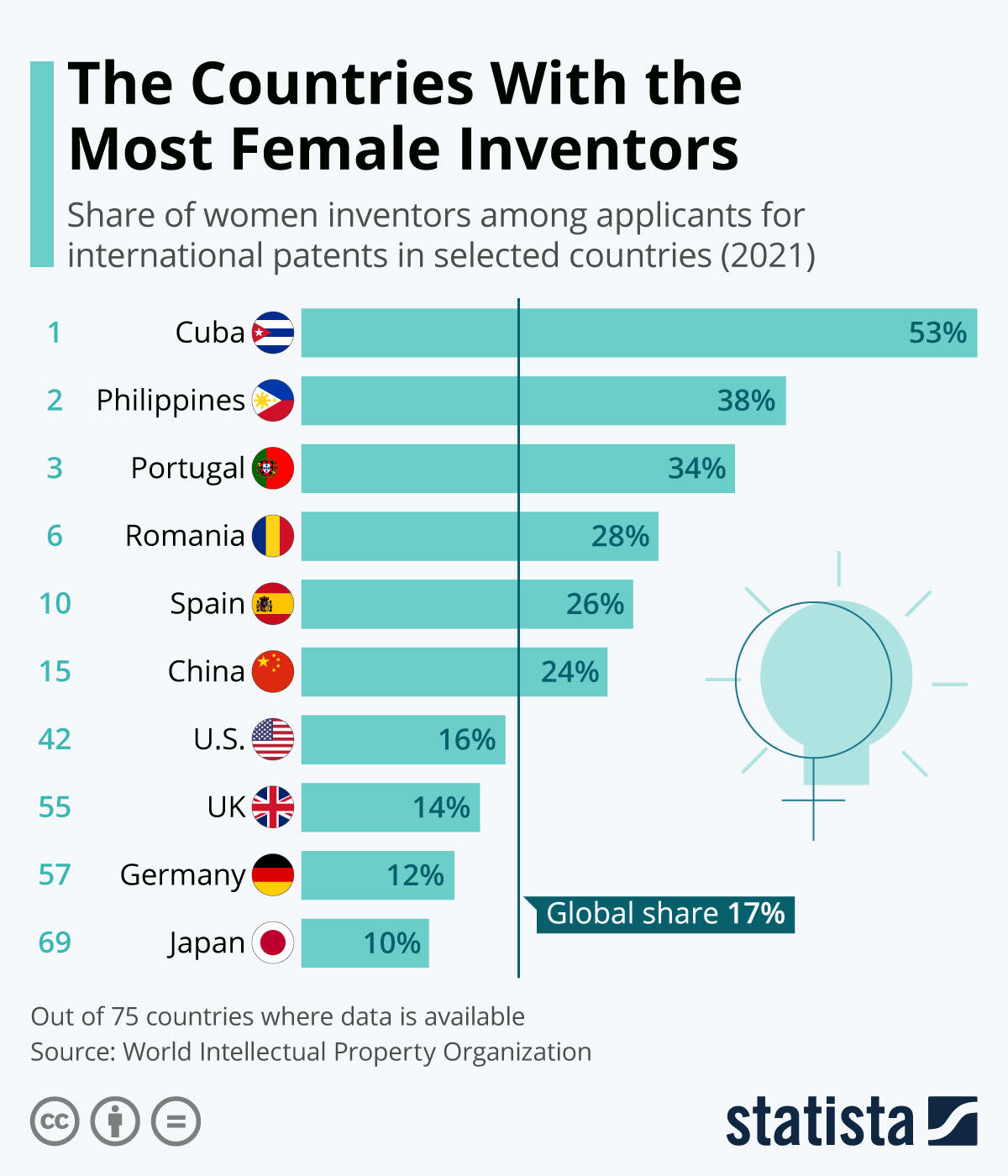 Katharina Buchholz, data journalist at Statista, said Portugal was the highest-ranked European country at No. 3, followed by Romania at No. 6 and Spain at No. 10.

China was on top with 24 percent of patent applicants being female inventors, she said.

Other European countries—Germany, UK, Italy and Sweden—“stayed behind the global average,” Buchholz said. The US and France ranked “above average,” she said.

Japan was 69th out of 75 countries based on data by the WIPO. The country that is known for its long list of inventions that have changed the world through the years, had only 10 percent of female inventors who applied last year.

Statista also noted that countries such as India, the United Arab Emirates (UAE), and Indonesia likewise had low shares of female inventors among patent applicants last year and were ranked at the lower end of the list.

As the number of Filipina inventors applying for international patents increase through the years, we look back at some of the iconic and well-known Filipina inventors who continue to become an inspiration for generations of women who hope to enter the field.

Among these Filipina inventors was renowned Filipino doctor and scientist, Fe del Mundo. 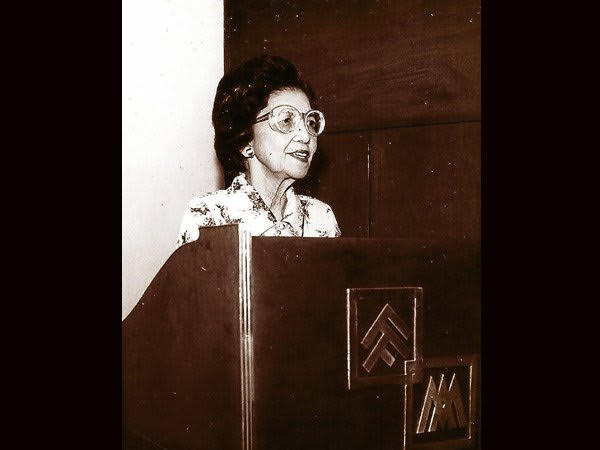 Del Mundo was a pediatrician, a distinguished scholar, humanitarian, and a leader in establishing various pediatric institutions in the country—including the Fe Del Mundo Medical Center, formerly known as Children Medical Center, the first pediatric hospital in the Philippines.

Dubbed “a woman of firsts” the world-renowned doctor was known as the first woman pediatrician to be admitted to Harvard Medical School in 1936, and the first woman to be named National Scientist of the Philippines in 1980.

In terms of invention, Del Mundo was credited with studies that led to the invention of the first incubator—made of bamboo—and jaundice-relieving device.

Another celebrated Filipina scientist and inventor was Maria Ylagan Orosa—a chemist, pharmacist, food scientist, humanitarian, and a freedom fighter and a war heroine who hailed from Batangas.

The famous banana ketchup was a brainchild of Orosa, as well as other inventions including clay pot oven, the first frozen Philippine mangoes produced in the country, vinegar made from pineapple, jams and jellies out of local fruits and calamansi juice, and many more.

“In total, Orosa is credited with over 700 recipes, many of which remain pillars of Filipino cuisine to this day. While many of her products have become fixtures in Filipino homes, Orosa is hardly a household name,” said writer Jessica Grinch.

“In part, this was intentional. As a humanitarian, she believed knowledge was something to share, not sell. ‘When you start an experiment, finish it and write the results for others to use,’ she often told her assistants. Her erasure was completed by corporations, who commodified her scientific contributions without acknowledging their origins.”

Based on data from the Invention Development Division of the Department of Science and Technology (DOST), there were a total of 275 entries of DOST-assisted technology by female researchers that were granted intellectual property (IP) rights.

There were 102 entries for DOST-funded technology with IP rights by groups with at least one female researcher.

Researchers from McGill University, Harvard Business School, and the Universidad de Navarra in Barcelona published a study last year, which detailed the impact of gender gap and gender bias in biomedical invention and patents.

Researchers analyzed a total of 441,504 medical patents filed from 1976 through 2010 and found that most of the patented biomedical inventions were by men, and were more likely to focus on the medical needs of men.

Who do we invent for? Patents by women focus more on women’s health, but few women get to invent

“Overall, the researchers found that across inventor teams of all gender mixes, biomedical invention from 1976 to 2010 focused more on the needs of men than women,” the article added.

Such patents were more likely to focus and address medical conditions like breast cancer and postpartum preeclampsia, as well as diseases that disproportionately affect women, like fibromyalgia and lupus.

“While inventions by women are more likely to be female-focused, such patents have been less common because so few inventors were women,” the same McGill university said.

“In total, women were listed as co-inventors on just a quarter of all patents filed during the period,” it added.

The study likewise noted that differences in “mentoring to biases in the early-stage feedback that women receive when trying to commercialize female-focused ideas” might have caused the gender gap in the share of female scientists who commercialized their research ideas in the last 35 years.

“Our findings suggest that the inventor gender gap is partially responsible for thousands of missing female-focused inventions since 1976,” said co-author Rembrand Koning, an assistant professor at Harvard Business School.

“Our calculations suggest that had male and female inventors been equally represented over this period, there would have been an additional 6,500 more female-focused inventions,” Koning added.

According to their study, female inventors are more likely to find ways to improve existing treatments for non-sex-specific diseases like heart attacks, diabetes, and stroke and be adapted for the needs of women.

They were also found to be more likely to test if ideas and inventions would have different effects on men and women.

“Our results suggest that increasing representation should address these invisible biases,” said Koning.

Cynthia Tregillis and Sabra Truesdale, senior vice president and deputy general counsel and associate general counsel at the World Economic Forum, said they believed that patent process can be used to close the gender gap in the STEM workforce—which in return, will benefit not only organizations but also women.

“The STEM gender gap goes beyond headcount. Women in STEM also lag behind their male counterparts financially and from a leadership perspective,” said Tregillis and Truesdale.

“Increasing women’s participation in patenting activity will yield higher job satisfaction and headcount retention among women, which will allow women greater opportunities to rise to leadership positions in STEM, which in turn will help increase their earnings,” they added.