'Hide-and-seek' from debates? Marcos Jr. can't be in two places at once, says spokesman | Inquirer News

‘Hide-and-seek’ from debates? Marcos Jr. can’t be in two places at once, says spokesman 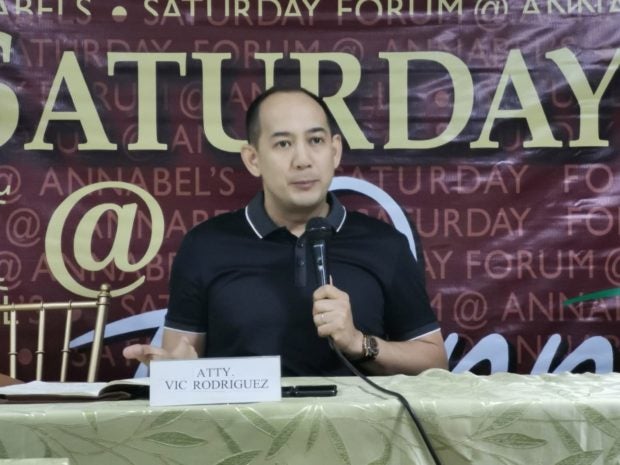 MANILA, Philippines — The camp of Ferdinand “Bongbong” Marcos Jr. countered criticisms made by former congressman Erin Tañada, who called out the former senator’s non-appearance in most of the presidential debates.

“Mr. Tañada is perfectly right in saying that leadership is about honoring commitments — the very same reason why presidential candidate Bongbong Marcos cannot be in two different places at one given time,” Marcos Jr.’s spokesperson, Atty. Vic Rodriguez, said in a statement on Tuesday.

This is in response to a statement issued by Tañada reminding Marcos Jr. that the “presidency is not a game of hide-and-seek.” Tañada is the campaign manager for the senatorial slate of Vice President Leni Robredo and Senator Francis Pangilinan.

According to Rodriguez, Marcos Jr. had to  “politely beg off media interviews, sometimes skip debates and fora in order to honor his promise to meet with grassroots leaders, join caravans, and attend campaign rallies that have been scheduled way ahead of the requests for media appearances.”

“He can take the consequences for not attending the debates and media fora, but not the loss of trust of his leaders and supporters with whom he had confirmed appointments,” he said.

“Because his words are his bond,” he added.

On Erin Tanada’s misinformation:“Mr. Tanada is perfectly right in saying that leadership is about honoring commitments…

“His participation in the Boy Abunda, Korina Sanchez, DZRH, DZBB, and TV5 presidential interviews and the SMNI debate will disprove Mr. Tañada’s assertion,” the spokesperson added.

In his statement, Tañada also said the camp of Marcos Jr. is embracing a different kind of “cancel culture” amid the former senator’s no-show at some events. Tañada particularly mentioned the called-off political rally scheduled in Antique.

“On Mr. Tanada’s claim of cancel culture, the local folks in Panay island knew that those scheduled rallies were canceled for the sake of peace and unity among the residents in the community because of the growing tension during those scheduled dates caused by political partisans,” Rodriguez said.

“The UniTeam cannot afford the disunity among local folks because its advocacy is for unified citizens to face the challenges caused by the coronavirus pandemic,” he added.