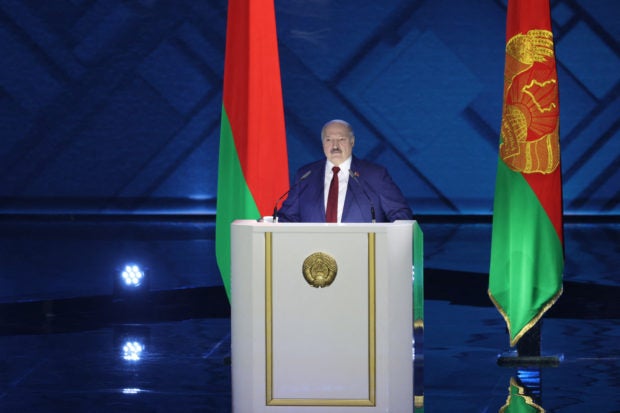 Belarus President Alexander Lukashenko gives a speech during his annual address to Belarusian People and the National Assembly in Minsk on January 28, 2022.  AFP

MOSCOW — Belarusian President Alexander Lukashenko said Tuesday he had ordered more troops to the south of the country, by the border with Ukraine, the Belta news agency reported.

But forces of Belarus, a close ally of Russia, would not be taking part in the attack on Ukraine, he added.

On the sixth day of Russia’s invasion of Ukraine, Lukashenko told a meeting of his security council that he would be sending five tactical battle groups to protect the south.

These battle groups will comprise hundreds of soldiers equipped with armored vehicles and artillery.

Helicopters and warplanes were already protecting the southern border, he told the meeting.

Explaining his decision not to send troops into Ukraine itself, he said: “That’s not our job.”

Lukashenko also said he was sending troops west to the country’s border with Poland.

“We must under no circumstances allow an invasion of Nato forces on Belarusian territory, nor the least operation on our territory,” he said.

Last week Lukashenko allowed Russian troops to use Belarusian territory to invade Ukraine from the north.

On Monday, the authorities announced that a referendum held the previous day had voted to allow the country to host nuclear weapons and Russian forces permanently, part of a package of reforms that also extended Lukashenko’s rule.

Lukashenko said he had asked Russian President Vladimir Putin for extra Russia S-400 anti-aircraft missiles, to deploy them along its western border. Some are already deployed along the southern border with Ukraine.