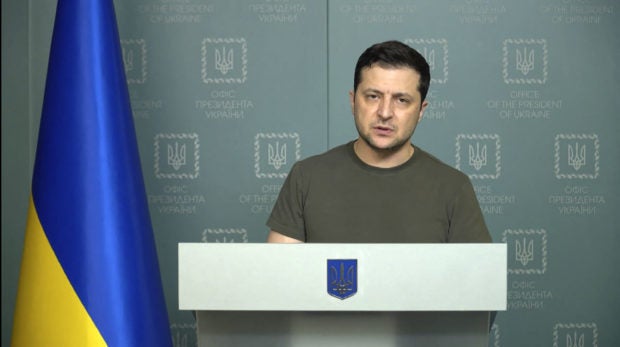 KIEW, Ukraine — Ukraine’s President Volodymyr Zelensky said Sunday that he was ready for talks with Russia, but rejected Moscow’s push to stage them in Belarus as it was a launchpad for invading forces.

“Warsaw, Bratislava, Budapest, Istanbul, Baku. We proposed all of them,” Zelensky said in an address posted online.

“And any other city in a country from whose territory missiles do not fly would suit us,” the 44-year-old president said.

“That’s the only way talks can be honest. And could put an end to war.”

Zelensky’s address came as Kremlin spokesman Dmitry Peskov told Russian news agencies that Moscow was prepared for talks and had dispatched a delegation to the Belarusian city of Gomel.

“We will be ready to begin these talks in Gomel,” Peskov said.

Russian President Vladimir Putin on Thursday launched a full-scale invasion of Ukraine that has already cost some 200 civilian lives and drawn global condemnation.

Moscow says Kyiv’s forces must surrender and the country should agree to become a “neutral” territory, conditions seen widely as unacceptable by Ukraine.

Russian ground forces have pressed into Ukraine from the north, east and south but have encountered fierce resistance from Ukrainian troops, the intensity of which has likely surprised Moscow, according to Western sources.

“Special gratitude to those who these days are heroically fulfilling their military duty in the course of a special operation to provide assistance to the people’s republics of Donbas,” Putin said in a televised address.