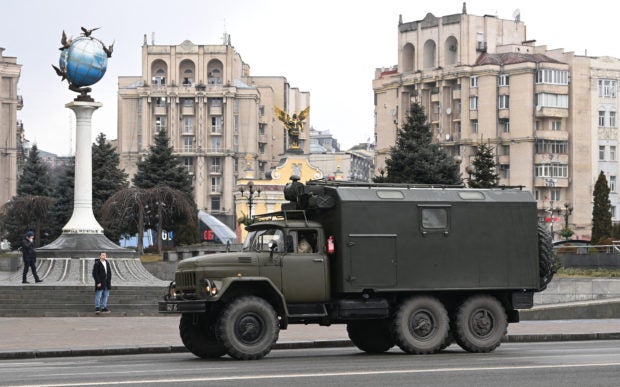 A military cargo truck is pictured in central Kyiv in the morning on February 24, 2022. AFP FILE PHOTO

KYIV — Deadly Russian air strikes hit a residential block in Ukraine’s second city of Kharkiv and the main TV tower in the nation’s capital, Kyiv said Tuesday, with Ukraine’s president accusing the Kremlin of a “war crime” as the civilian toll of the invasion mounted.

Despite sanctions and warnings of a humanitarian crisis, the fresh assaults on day six of Russia’s invasion came as a massive military convoy was closing on the capital, and Moscow warned terrified residents living near security infrastructure to leave their homes.

“This is state terrorism on the part of Russia,” charged Ukrainian President Volodymyr Zelensky, accusing Moscow of committing a “war crime” in Kharkiv.

After a call with US President Joe Biden — who was later to deliver a State of the Union address overshadowed by the spiraling Ukraine conflict — Zelensky tweeted: “We must stop the aggressor as soon as possible.”

Although Russia has denied targeting civilian infrastructure, British Prime Minister Boris Johnson on Tuesday called the bombardment of Kharkiv “absolutely sickening” and reminiscent of massacres of civilians in Sarajevo in the 1990s.

Eight people were reported killed in the strike on a residential building in the city, Ukraine’s second largest, and officials said 10 people had been killed by Russian shelling on a local government complex.

The International Criminal Court has already opened a war crimes investigation against Russia. Ukraine says more than 350 civilians, including 14 children, have been killed in the conflict.

In southern Ukraine, the city of Mariupol on the Azov Sea was left without electricity after bombardment, while Kherson on the Black Sea reported Russian checkpoints encircling the city.

In a key victory for Moscow, Russia’s defence ministry said its troops had linked up with pro-Moscow rebel forces from eastern Ukraine along the Azov Sea coast.

But Ukrainian forces say despite incursions by “sabotage groups,” Russian forces have yet to capture a major city.

During a visit to an airbase in Poland, Nato chief Jens Stoltenberg said Russian President Vladimir Putin had “shattered peace in Europe”.

Zelensky reiterated an urgent appeal for his country to be admitted to the European Union.

“Prove you are not abandoning us and you are really Europeans,” he told MEPs in a video address to the European Parliament.

More than 660,000 people have fled abroad, the UN refugee agency said, estimating that a million people are displaced within ex-Soviet Ukraine, which has a population of 44 million.

Russia has defied international bans, boycotts and sanctions to press ahead with an offensive it says is aimed at defending Ukraine’s Russian speakers and toppling the leadership.

He vowed to “demilitarise and de-Nazify” Ukraine and protect Russia from a “military threat created by Western countries”.

Western powers are planning more sanctions, with French Finance Minister Bruno Le Maire vowing they would cause the “collapse of the Russian economy” — before saying his language was inappropriate.

Fears are growing of an all-out assault to capture Kyiv, a city of 2.8 million.

Satellite images provided by US firm Mazar showed a 65-kilometer (40-mile) long build-up of Russian armoured vehicles and artillery north of the capital.

Inside Kyiv, makeshift barricades dotted the streets and residents queued outside the few shops open to buy essentials.

In nearby Shaika village, Natasha, 51, opened a canteen in the local church to feed soldiers and volunteers.

“The shelling and the bombing kept us up all night,” she said.

Germany has already promised arms for Ukraine, while the EU said, in a first, that it will buy and supply arms to the country.

Turkey said it would implement an international treaty to limit ships passing through the Dardanelles and Bosphorus straits, a move requested by Ukraine to block Russian warships.

Apple on Tuesday stopped all sales in Russia. And the European Union banned Russian state media outlets RT and Sputnik from broadcasting in the bloc while also barring some Russian banks from the SWIFT bank system.

Within Russia, sanctions imposed by the West have begun to bite.

Putin announced emergency measures intended to prop up the Russian ruble, including banning Russians from transferring money abroad, after the currency crashed to a record low.

Traditionally a powerhouse in figure skating, Russia’s skaters have been barred from all competitions and its athletes were also barred from this year’s world championships.

FIFA has already kicked Russia out of the 2022 World Cup.

In the arts, the Munich Philharmonic said it was parting ways with star Russian conductor Valery Gergiev “with immediate effect” after he failed to denounce the invasion.

Belgium to send 300 troops to Romania, machine guns to Ukraine

Read Next
Biden vows Putin, Russian military will suffer in years ahead
EDITORS' PICK
In Borongan, nuns play hoops (not mahjong)
House energy committee chair Arroyo bats for cheap electricity
A laptop that maximizes your WiFi so you can maximize your productivity
Why Tagle is a leading papal contender
Powered by style, innovation and passion
KWF has no power to ban, censor written works – Lagman
MOST READ
Why Tagle is a leading papal contender
Arjo Atayde reveals proposal to Maine Mendoza was ‘more than a year’ in the making
My neighbor FVR: From soldier to president
Zubiri on SRA mess: Shameful, disgusting
Don't miss out on the latest news and information.