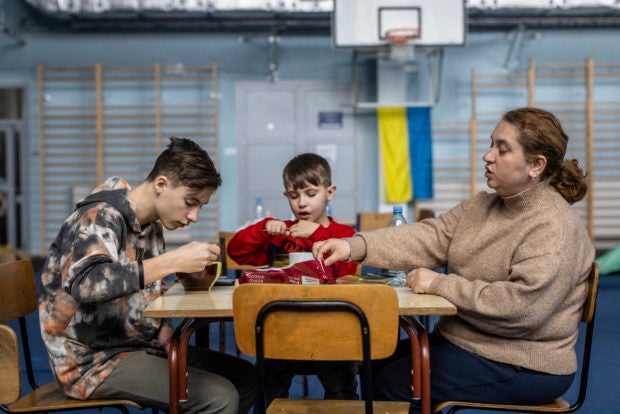 Ukrainians Svetlana (R) and her children Svyatoslav (L) and Ivan (C), are seen in temporary accommodation in a sports hall in Przemysl, in eastern Poland on February 28, 2022. AFP

PODKOWA, LEŚNA, Poland — Yelena Kleban’s life was turned upside down in a matter of minutes when Russian bombs fell near her hometown of Lviv, but the Ukrainian refugee says the welcome she has received in Poland is beyond her expectations.

“We have everything, really everything, even too much stuff,” Kleban exclaimed sitting amid boxes of food in the kitchen of a villa in Podkowa Lesna, a leafy suburb of the Polish capital Warsaw.

“The people here are amazing, so generous, we didn’t expect so much sympathy,” she added.

Tens of thousands of Ukrainians have traveled by car, taxi, bus, train and even foot to make the 70-kilometer (43-mile) journey from Lviv to the Polish border town of Medyka.

“We really didn’t expect Lviv to be attacked on the first day of the war,” the 35-year-old Kleban told AFP.

“But Putin hates Lviv, the spiritual heart of Ukraine,” she says of Ukraine’s westernmost large city with a population of 721,000, and the closest to the eastern frontier of the European Union and Nato.

When the first Russian bombs fell, there was no room for hesitation: “We had to save the children,” she said, adding that the “men stayed behind to fight or dig trenches.”

With her younger sister, sister-in-law, their seven children, and their grandmother, Yelena hurriedly gathered a few belongings and headed for Poland.

They are exhausted but safe, having spent their first night on mattresses on the ground floor of a 1920s house, as the guests of a Polish family.

Overall, more than half a million people have fled Ukraine since its Soviet-era master Moscow launched a full-scale invasion on February 24. More than half of them have fled into neighboring EU and Nato member Poland, the United Nations said Monday.

Another 250,000 were waiting in massive queues at more than half a dozen crossing points to enter Poland, according to Polish media reports.

Ukrainian refugees have also fled to other bordering states including Slovakia, Hungary and Romania, which as members of both the EU and Nato offer safe havens ostensibly beyond Moscow’s reach.

During the Cold War, all the frontline states now welcoming Ukrainians had been ruled by communists within the Soviet sphere of influence, often begrudgingly.

The EU on Monday poured cold water on a plea from Ukrainian President Volodymyr Zelensky for “immediate” membership to the bloc for his country as Kyiv battled the Russian invasion.

Yet the welcome Yelena has received in Poland was just one example of the great outpouring of solidarity Poles and other EU citizens in the region are showing their Ukrainian neighbours.

No passport, no problem

In Podkowa Lesna, neighbors brought everything — sheets, blankets, pillows, clothes and food and especially toys for the seven children.

A big pot of soup was also waiting for Yelena and her family, prepared by a couple, a doctor and a physics professor at Warsaw University.

Their son, Jan Lusakowski, translated the recipe on Google Translate, so the Ukrainian newcomers could be familiar with what was on the menu.

“We didn’t expect such generosity,” said 33-year-old Inna Urbanowicz, the mother of a 14-year-old girl and a 7-year-old boy, tears welling up in her eyes.

“I didn’t even have a passport to enter the European Union,” says 33-year-old Iryna, who left Ukraine for the first time ever.

Her children –- 18-month-old Oleksandr and 14-year-old Alina –- did not have any travel documents either.

“Fortunately, the Polish border guards agreed to let us pass solely on the basis of extracts from our birth certificates,” says Iryna.

Over the weekend, the small suburb of Podkowa Lesna received around fifty people, accommodated mostly in private homes.

“We should be able to receive some 300 people,” says its mayor Artur Tusinski, who called on residents to help last Friday.

“We need food, hygiene products, baby bottles, food for children and beds. And above all we need money to finance this all,” said the mayor, his voice weighed down with concern.

“We need to feed all those people. And nobody knows how long this will last.”

“Two orphanages from the Kharkiv region are on their way to us,” said Artur Niedzinski, tasked with organising aid at the Podkowa Lesna community centre. “The group comprises above all handicapped children.

“They’re stuck at the border and they should arrive within 24 hours if everything goes well,” he told AFP.

“People from Podkowa Lesna have taken their cars and driven to the border to pick them up.”

Agnieszka Hein, the headmistress of the local primary school, has already started checking the age of the refugee children.

“We hope they will be able to return to their country fast, but before that happens, we need to engage them in normal activities to help them shake off the stress,” she said.