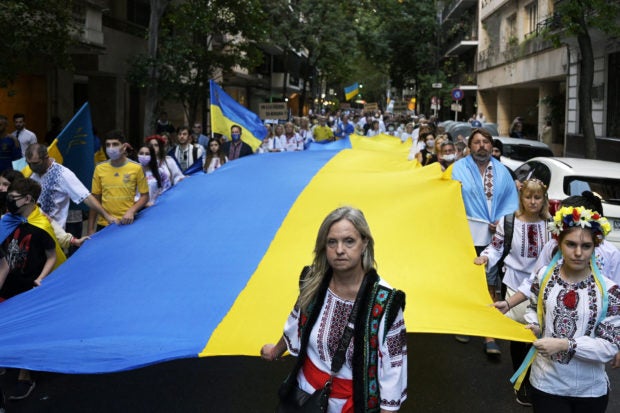 Members of the Ukrainian community take part in a protest outside of the Russian embassy in Buenos Aires, on March 1, 2022. (Photo by JUAN MABROMATA / AFP)

PARIS — On the sixth day of fighting in Ukraine Tuesday, Russia is striking cities and building up its forces near the capital Kyiv, vowing not to stop until “set goals are achieved”.

Here is a summary of the situation on the ground, based on statements from the warring sides, Western defense and intelligence sources and international organizations.

– Russia says will continue “until set goals are achieved”.

– Russian troops and pro-Moscow rebels link up in a key region in eastern Ukraine, Moscow says.

– Ukraine says has taken out hundreds of Russian pieces of weaponry, including 29 aircraft, 29 helicopters and 198 tanks.

– A Russian missile attack on a government building in Kharkiv kills 10 or more and wounds 20, Ukraine says.

– Nato will “defend every inch” of its territory, alliance chief says.

– One million people are displaced within Ukraine, and more than 677,000 have fled abroad, UN says.