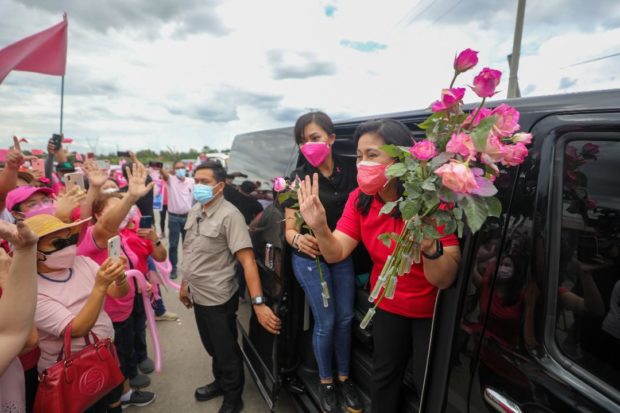 Novo Ecijanos hand pink roses to Vice President Leni Robredo as she passed by the stationary caravan for Leni-Kiko in Cabanatuan City, Nueva Ecija, on Monday, November 15, 2021. While some brought flowers, other Novo Ecijanos who joined the caravan waved pink balloons and pink lanterns to express their support for VP Leni’s presidential bid in 2022. (Photo by OVP Photographers)

MANILA, Philippines — The consistent warm reception she is getting from the public about her presidential bid still comes as a surprise for Vice President Leni Robredo.

According to her, she did not expect such an overwhelming response, considering her standing in surveys, since October 7 when she announced her intention to run for president. But she also said she is no longer a stranger to uphill battles.

(Again, it’s a pleasant surprise for us because when I entered the race, when I filed my certificate of candidacy, we were aware of our standing. We were aware of my standing. It’s like in 2016 when we started at the bottom of the race, we have targets where we aim to increase, little by little, our numbers.)

While they were expecting the numbers to eventually multiply, Robredo said they were anticipating it to happen by January or February 2022.

(So when we saw the latest surveys, now that I rank second, it’s good news. It’s good news because we were not expecting that to happen this early, that I would be ranking second.)

(Before, we thought that this would happen next year, around January or February because I started out low. But the mere fact that I am second, of course, this is very well taken by our campaign team.)

Robredo was talking about the latest Social Weather Stations (SWS) survey commissioned by the Stratbase ADR Institute, in which she ranked second among preferred presidential candidates for the May 2022 elections. This SWS poll was conducted on the third week of October.

This is a huge development for Robredo’s camp because the survey of another polling firm, Pulse Asia, which was conducted last September 29, ranked her sixth among the presidentiables.

After announcing her plan to run for president in the upcoming elections, Robredo’s team saw a wave of support, marked by the pink color on social media feeds and during motorcades.

Although the Vice President’s camp sees among their concerns the still wide lead of rival Ferdinand “Bongbong” Marcos Jr. in surveys, Robredo said she is not bothered by it.

The May 2022 elections would be the second face-off for Robredo and Marcos Jr., who first slugged it out during the 2016 vice presidential bout. Robredo narrowly beat the son of the late dictator President Ferdinand Marcos in that race.

(For us, the huge lead is understandable because our opponents have been preparing for over six years.  But I only decided on the 11th hour but the mere fact that changes occurred just a month since I decided, it increased by this much, this shows that we should be very hopeful because we didn’t expect it in the first place.)

(We weren’t shocked about the numbers because we know what is being poured to get that standing now. But just like the last elections, this is still too early to say that this is already the frontrunner because we know between now and the official campaign period, the movement of rankings remains very fluid.)

The 2022 presidential election is shaping up to be a race between several high-profile aspirants. Aside from Marcos Jr., Senators Panfilo Lacson, Manny Pacquiao, Bong Go, Manila City Mayor Francisco “Isko Moreno” Domagoso, as well as retired Armed Forces of the Philippines Lt. Gen. Antonio Parlade also formalized their respective applications to run for president next year,