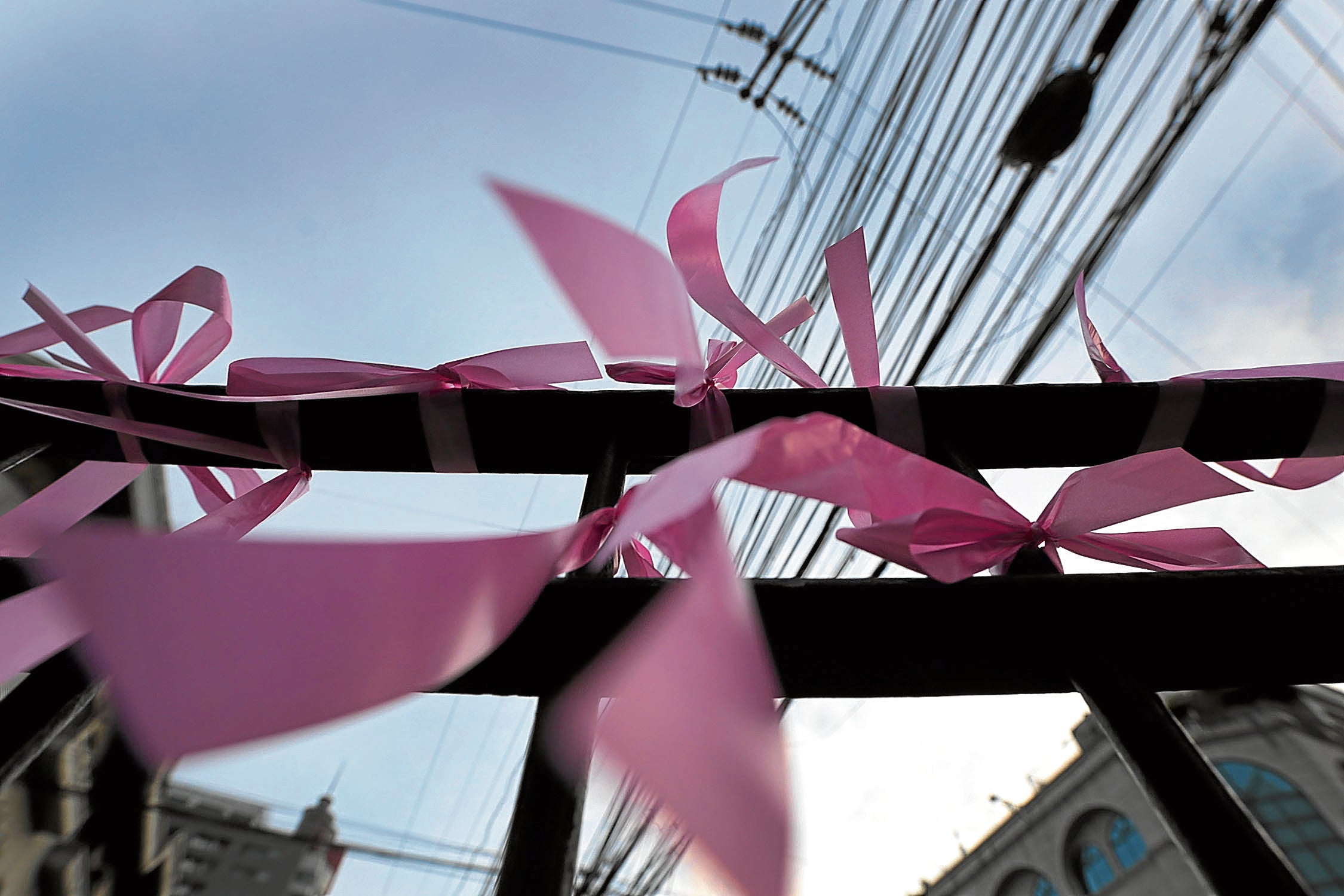 POLITICAL COLOR SEPARATION From being part of the so-called yellow crowd in the last elections, Vice President Leni Robredo switches to a rosier hue in her campaign for the country’s highest office, which formally kicked off with her much-anticipated announcement and filing of candidacy for president on Thursday. —GRIG C. MONTEGRANDE

MANILA, Philippines — Social media blushed in shades of pink on Thursday, after Vice President Leni Robredo declared her presidential bid adorned with new colors, which supporters saw as a sign of hope for the country besieged with a deadly pandemic and a struggling economy.

In her live address on Thursday announcing her long-awaited political plans, Robredo sported a pink ribbon pinned on a blue blouse, as her daughters Tricia and Aika wore pink face masks. Pink and blue ribbons also lined the street leading to the Quezon City Reception House where she holds office. At the Sofitel hotel in Pasay City, the three Robredos posed with their matching pink face masks as the Vice President held up her accomplished certificate of candidacy.

Robredo adopting pink and blue as her main campaign colors is a visible deviation from the color yellow that she had been associated with as a leader of the Liberal Party.

In Philippine politics, colors serve as important optics, a way of signifying how people ascribe to a cause, a group or, in this case, a particular candidate, said political analyst and lawyer Antonio La Viña.

In 1983, the color yellow was associated with the Aquinos, particularly the late Sen. Benigno “Ninoy” Aquino Jr., when supporters tied yellow ribbons around trees and fences—adapted from a famous American song—to welcome his return from the United States. Following his murder and the subsequent rise of his widow, the late President Corazon Aquino, the color had come to symbolize the fight for democracy amid the dark days of the Marcos dictatorship.

But in recent years, critics of the Liberal Party had shifted the color’s symbolism, branding party allies with the disparaging “dilawan” tag, often to demonize their alliance.

“Yellow obviously can’t be used by Leni because it is so tainted,” La Viña said in an interview.

La Viña, the former dean of the Ateneo School of Government, said the new colors for Robredo might also be signaling change.

It is still unclear why the Vice President had chosen pink and blue, although it is reminiscent of the colors of “Angat Buhay,” her flagship antipoverty program, which she called her “best legacy.”

“In choosing pink, VP Leni is signaling she wants a new broader coalition beyond the usual suspects,” said La Viña. “It’s a smart move, but it would have to be followed up with real inclusivity in the campaign.”

The pink hue may also be “a very direct appeal to mothers and women as it looks like she will be the only woman running,” the political analyst added.

In her speech, Robredo directly referenced mothers fleeing from domestic abuse to protect their children—an allegory that she has used for Filipinos suffering under a leadership filled with “corruption, incompetence, and lack of compassion.”

While it remains to be seen whether pink is truly in, those on social media are riding the momentum, with the hashtags #LetLeniLead and #LabanLeni trending the entire day on Twitter.

Politics in the Philippines has been either red, which is associated with socialism or the populist left; blue, for the conservatives, or yellow, for the liberal.

From yellow during the time of Corazon Aquino until the end of her successor Fidel Ramos’ term in 1998, the color changed to orange with the rise of Joseph Estrada as president. This was cut short by the “yellow army” that protested corruption during the “Edsa 2.” It gave rise to Gloria Macapagal-Arroyo, first a yellow being the Liberal Party standard-bearer, but later turning red when her supporters backed out when she ran for reelection and won with the support of the Nacionalista Party in 2004. Cory Aquino’s son, Benigno III, succeeded her and the country was back to yellow. In 2016, Rodrigo Duterte was elected president and the color changed to red of the PDP-Laban.