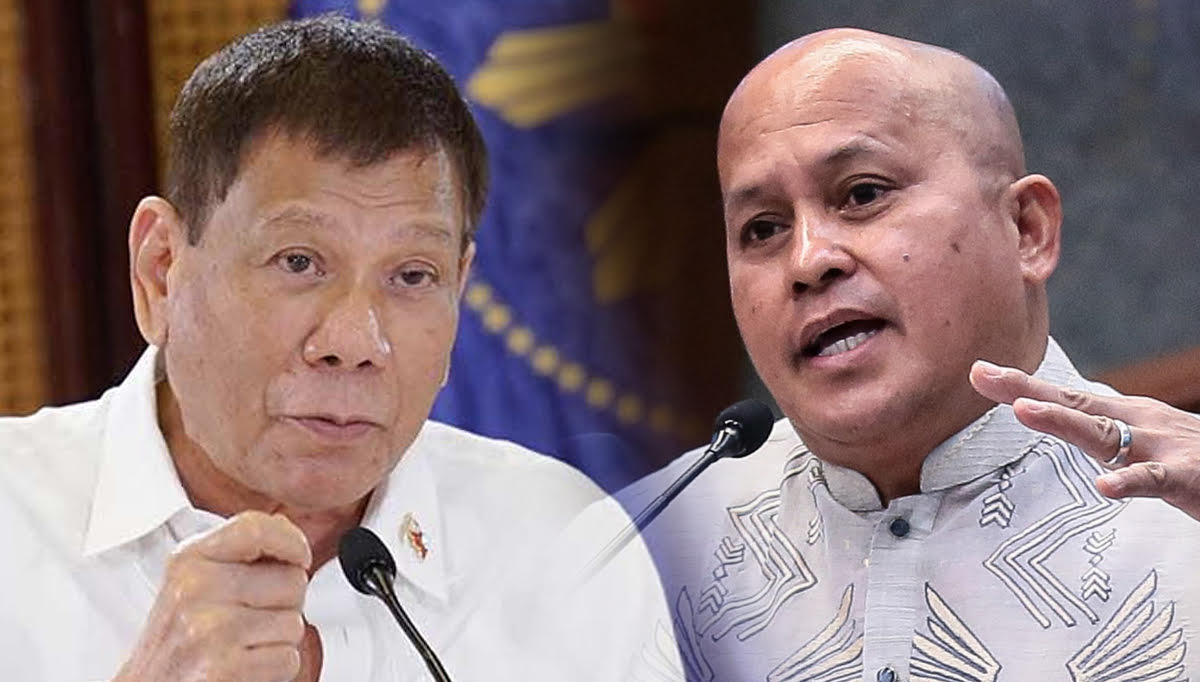 MANILA, Philippines—“The best president that the Philippines has ever had.”

This description of President Rodrigo Duterte, who is several months away from stepping down, could raise eyebrows because it came from one of Duterte’s closest confidants, Ronald “Bato” Dela Rosa, Duterte’s first police chief and now senator.

Dela Rosa’s bold statement, oozing with admiration, followed his description of Duterte as a “doctor who heals the Philippines.”

“I believe the President is not only good. He’s the best president that the Philippines has ever had,” said Dela Rosa on Nov. 3.

READ: Duterte is ‘best president the Philippines has ever had’- Bato

Prof. Ma. Ela Atienza, of the University of the Philippines’ Department of Political Science, said Dela Rosa’s words were expected. “He is very loyal to the President,” she said.

However, she said that there were many ways to measure Duterte’s performance or compare him with the performance of those who came before him on the basis of execution of a president’s constitutional duties.

Some of the questions that must be asked as people weigh Dela Rosa’s superlatives, according to Atienza, were did the President convey leadership, especially in the middle of the COVID crisis? Did he fulfill his mandate as head of state and government?

Atienza said while Duterte enjoyed high trust and satisfaction ratings since his election in 2016, “he failed in many of his functions.”

Sonny Africa, executive director of the research group Ibon Foundation, said Dela Rosa’s words oozing with admiration for Duterte showed signs of Dela Rosa’s “unfitness” to become president himself. Dela Rosa has filed a certificate of candidacy to run as president under the Alfonso Cusi wing of PDP-Laban but had said he was ready to step aside if Sara Duterte, the President’s daughter, decided to run for president.

According to Ibon’s Africa, the next president would be confronted with these challenges:

These, Africa said, are “not more of the same” Duterte legacies which will he said could only sink the Philippines “deeper into muck”

In 2020, as the COVID-19 crisis hit, the Philippines had its worst economic recession—negative 9.5 percent. This, while the government debt increased to P11.64 trillion in August.

Ibon said that even before the COVID-19 crisis, the economy had already been “weak,” saying that the 5.9 percent growth in 2019 was considered the slowest since 2011’s 3.7 percent.

This ended when Congress, in 2018, delayed passage of the General Appropriations Act. The government said a “full percentage point was lost” in GDP.

READ: Gov’t numbers: PH out of recession as economy grows by 11.8 percent in Q2

In 2019, the Department of Finance said the 2018 Philippine Statistics Authority’s (PSA) data on poverty incidence showed that Filipinos could reach the target of poverty reduction “ahead of schedule.”

The PSA said that poor Filipinos in 2018 were estimated at 16.6 percent of the population—17.6 million Filipinos who lived below the monthly poverty threshold of P10,727 for a family of five. 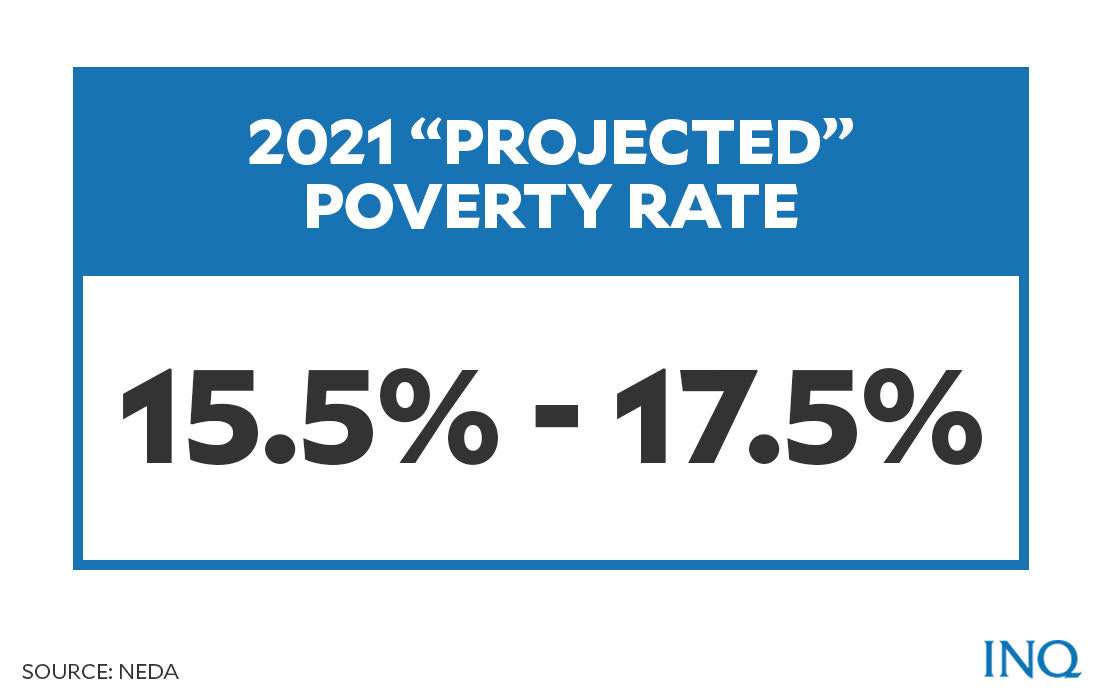 While this was lower than the 23.3 percent (23.5 million Filipinos) in 2015, Ibon said, “the government methodology to count the poor grossly underestimates Philippine poverty.”

It explained that the P10,727 benchmark for poverty meant P71 per person per day—P50 per day for food and P21 per day for non-food needs. “These low standards explain the reported fall in the number of poor Filipinos,” Ibon said. 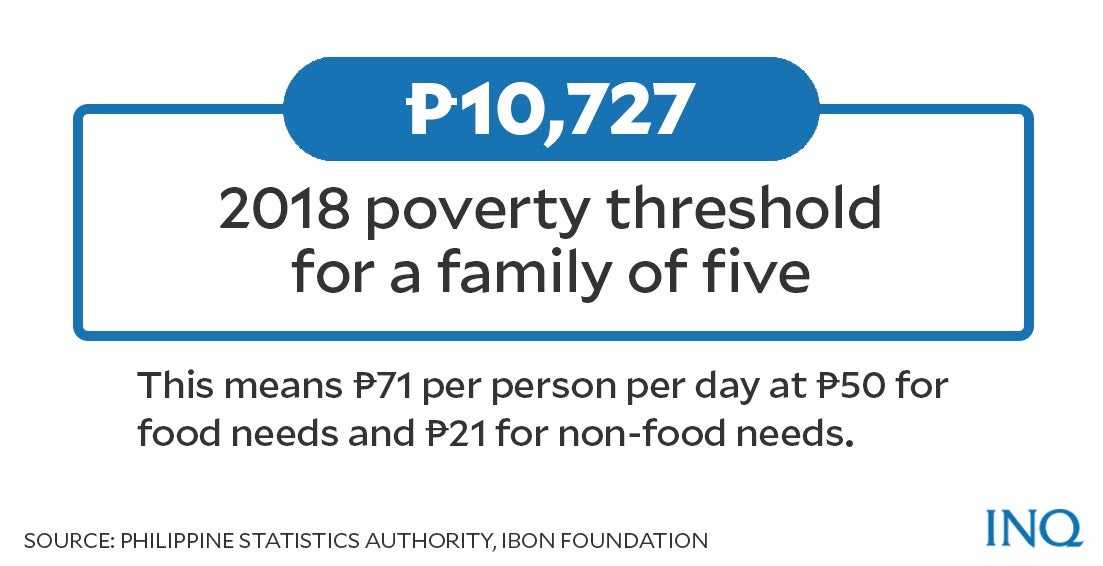 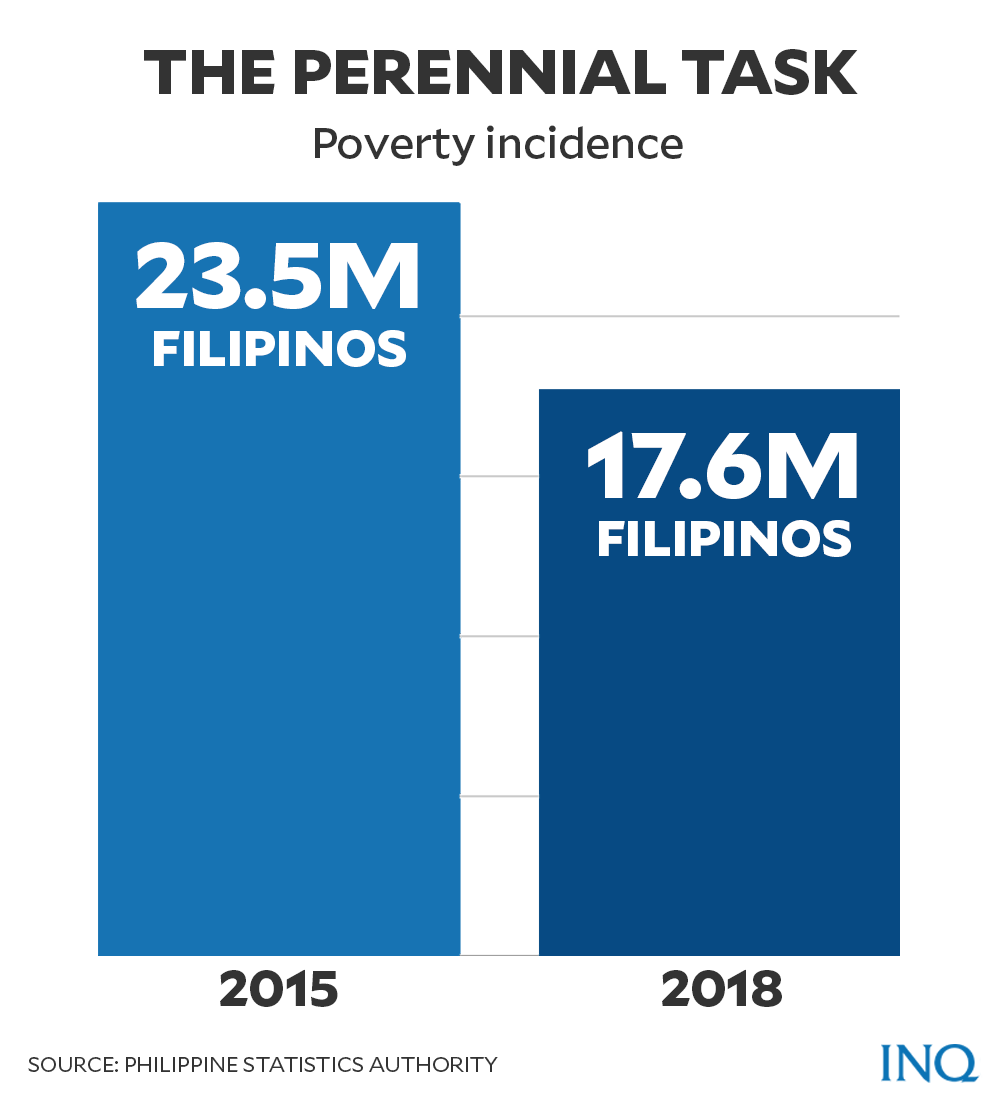 The National Economic Development Authority (Neda) said that with COVID-19, the projected poverty incidence in 2021 would average between 15.5 percent and 17.5 percent.

If 17.5 percent will be the poverty incidence in 2021, the government will likely fail in reaching Duterte’s goal of reducing poverty to just 14 percent by the time he steps down.

Since 2016, the President has been open about his priorities when it comes to human rights vis-a-vis his fight against crime and drugs. In one instance, he said, “I don’t care about human rights, believe me.”

The Philippine Drug Enforcement Agency said last Aug. 31 that a total of 6,191 individuals have been killed in the government’s war on illegal drugs. 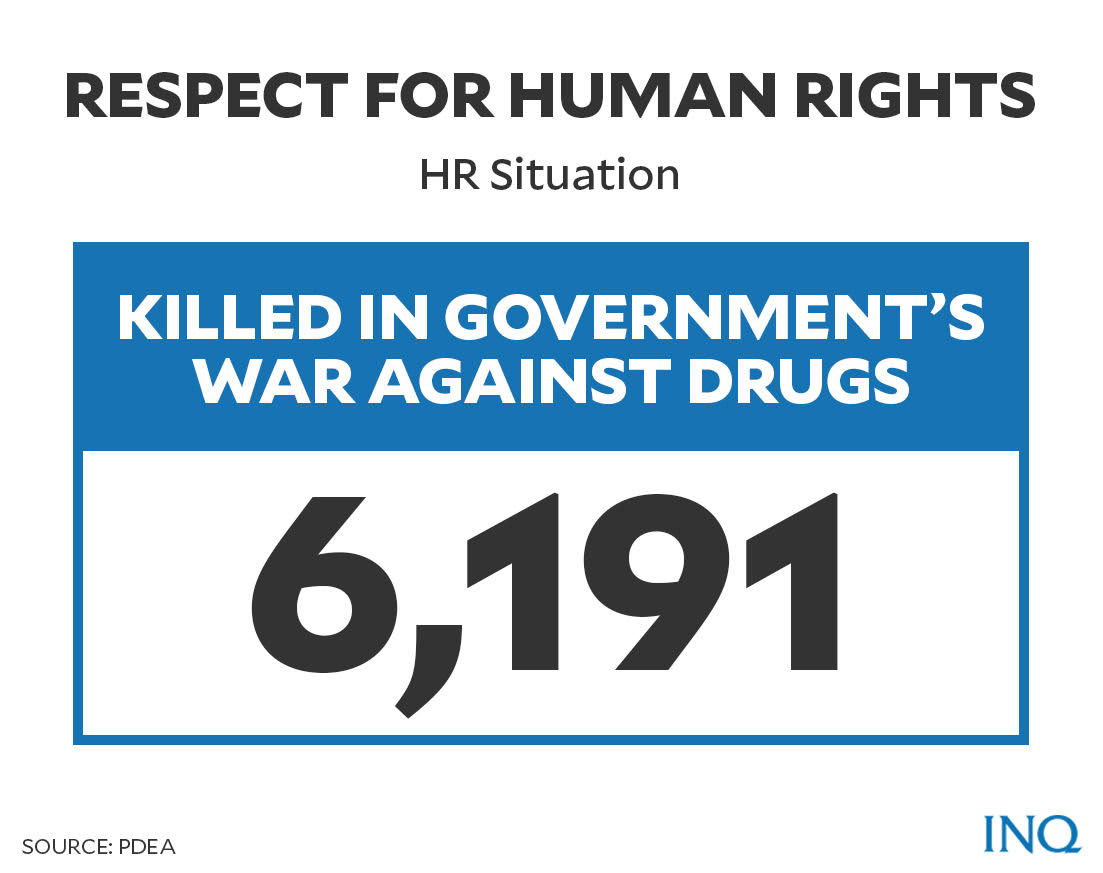 Related to the government’s escalating war on the Left, rights group Karapatan said 421 individuals have been killed since July 2016 to August 2020. 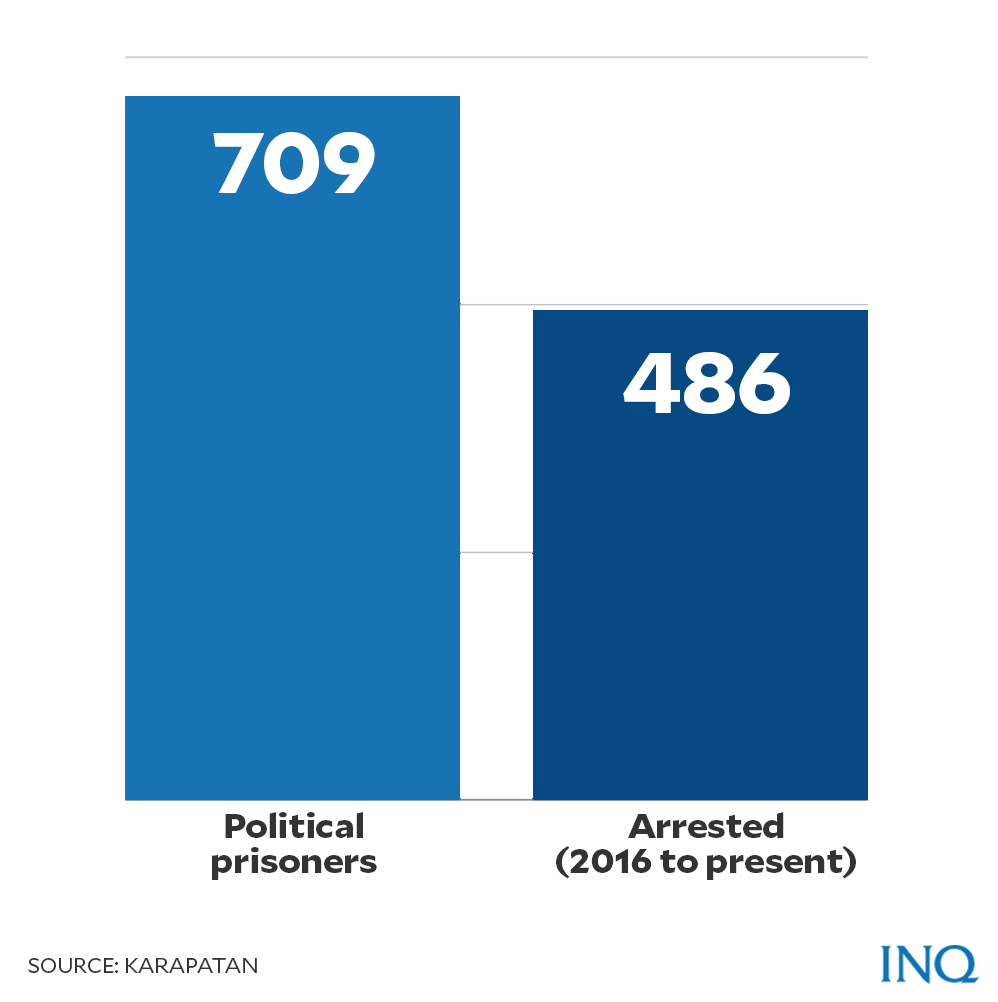 Karapatan said that since July 2016, 486 activists have been imprisoned by the government because of “fabricated cases.” This brought the count to 709.

In 2016, the President said, “Do not hesitate to attack me, criticize me, if I do wrong in my job. It is your duty to your country. As I have my duty to the people to serve you.” 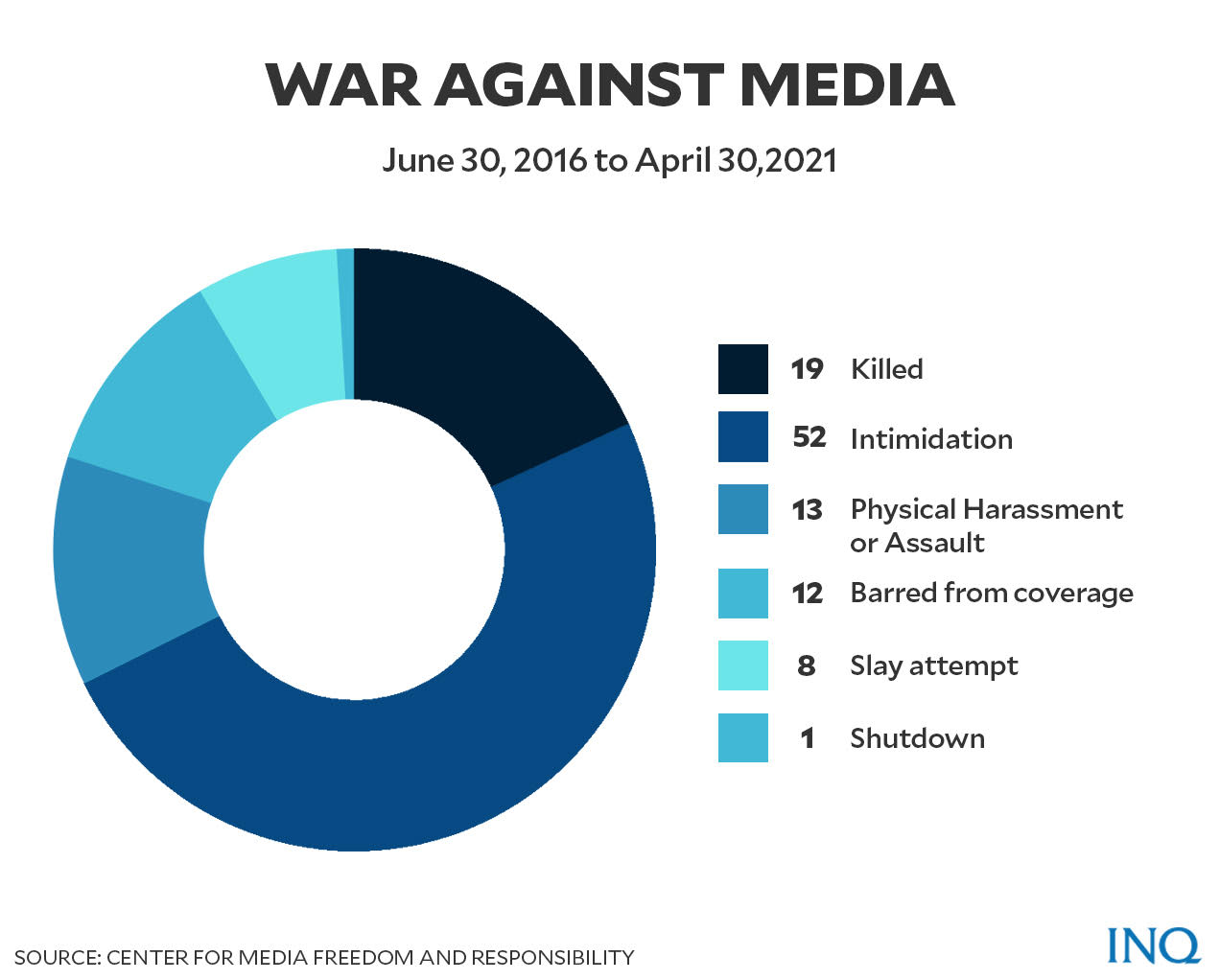 However, last July 2, the Paris-based Reporters Without Borders (RSF) named him as one of the 37 government leaders who have led relentless crackdowns against news.

The Center for Media Freedom and Responsibility (CMFR) said that from June 2016 to April 2021, 19 journalists have been killed while 52 were considered victims of intimidation.

CMFR said that 13 journalists were physically harassed, 12 were barred from coverage, and 12 were victims of slay attempts. One broadcast network was also closed down—ABS-CBN.

Since his election in 2016, Duterte has waged a “total war” on media, which have been considered as “collateral victims of his brutal methods, which tolerate no criticism or even nuance coverage of his policies,” said RSF.

The Social Weather Stations (SWS) said that 45 percent of Filipinos believe it’s dangerous to publish or broadcast things critical of the government—28 percent was undecided and 25 percent disagreed. 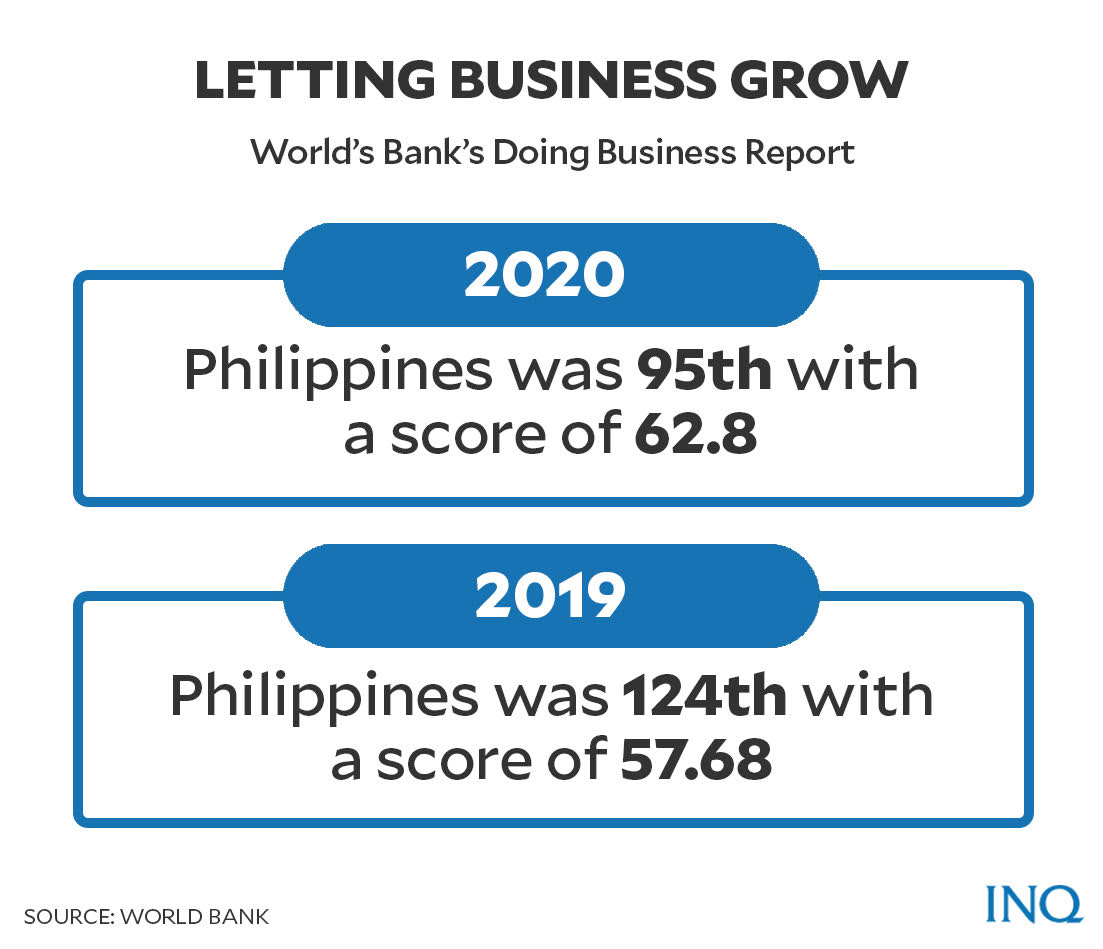 The Philippines also had the “biggest drop in employment” in Southeast Asia as a result of the COVID-19 crisis in 2020, Ibon said. Job loss, according to Ibon, was:

There was also an 8.9 percent unemployment rate, the PSA said—higher than the 8.1 percent in August, 6.9 percent in July, 7.7 percent in May and June. In April, it was 8,7 percent.

Africa said, “the 4.2 million unemployed in September is the most in 14 months or since the 4.6 million reported in July 2020.”

“Combined with likely low earnings even among those with work, this means that consumption is severely repressed,” Africa said. 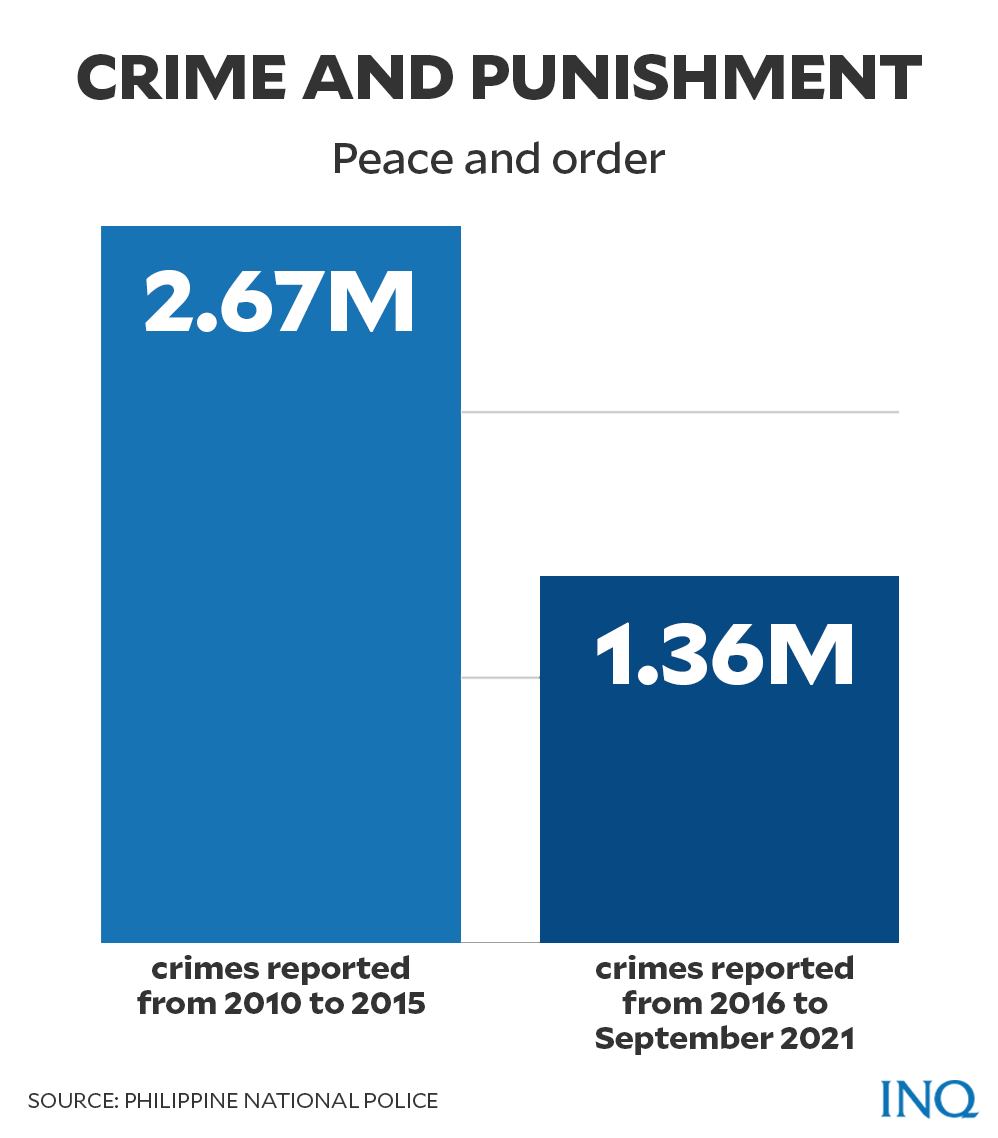 In July, however, lawyer Edre Olalia, of the National Union of People’s Lawyers (NUPL), said that this does not reflect reality as people still “witness or are made aware by news of dastardly crimes brazenly committed with utter impunity.” 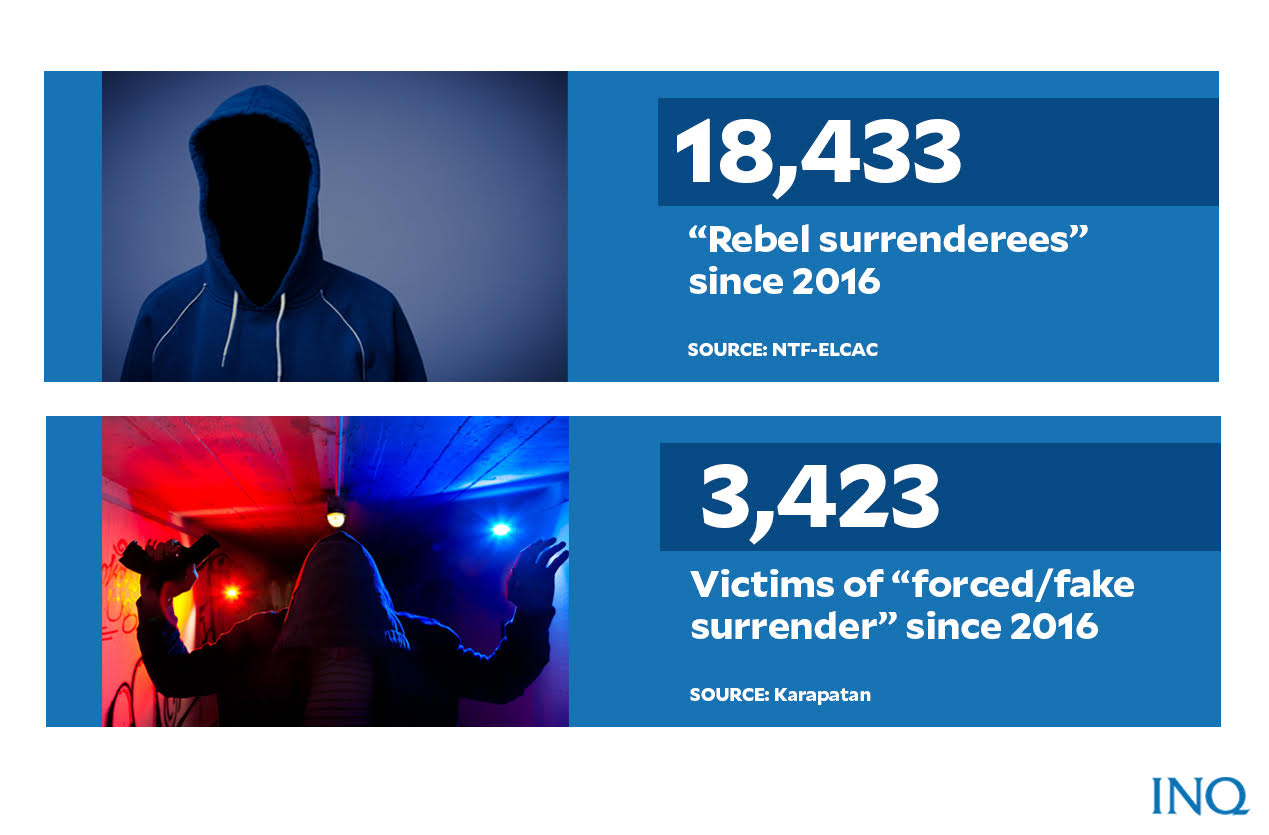 The National Task Force to End Local Communist Armed Conflict also said that since 2016, there have been 18,433 “rebels who went back to the folds of law.”

But Karapatan said that since 2016, there were 3,243 victims of “forced or fake surrender.” 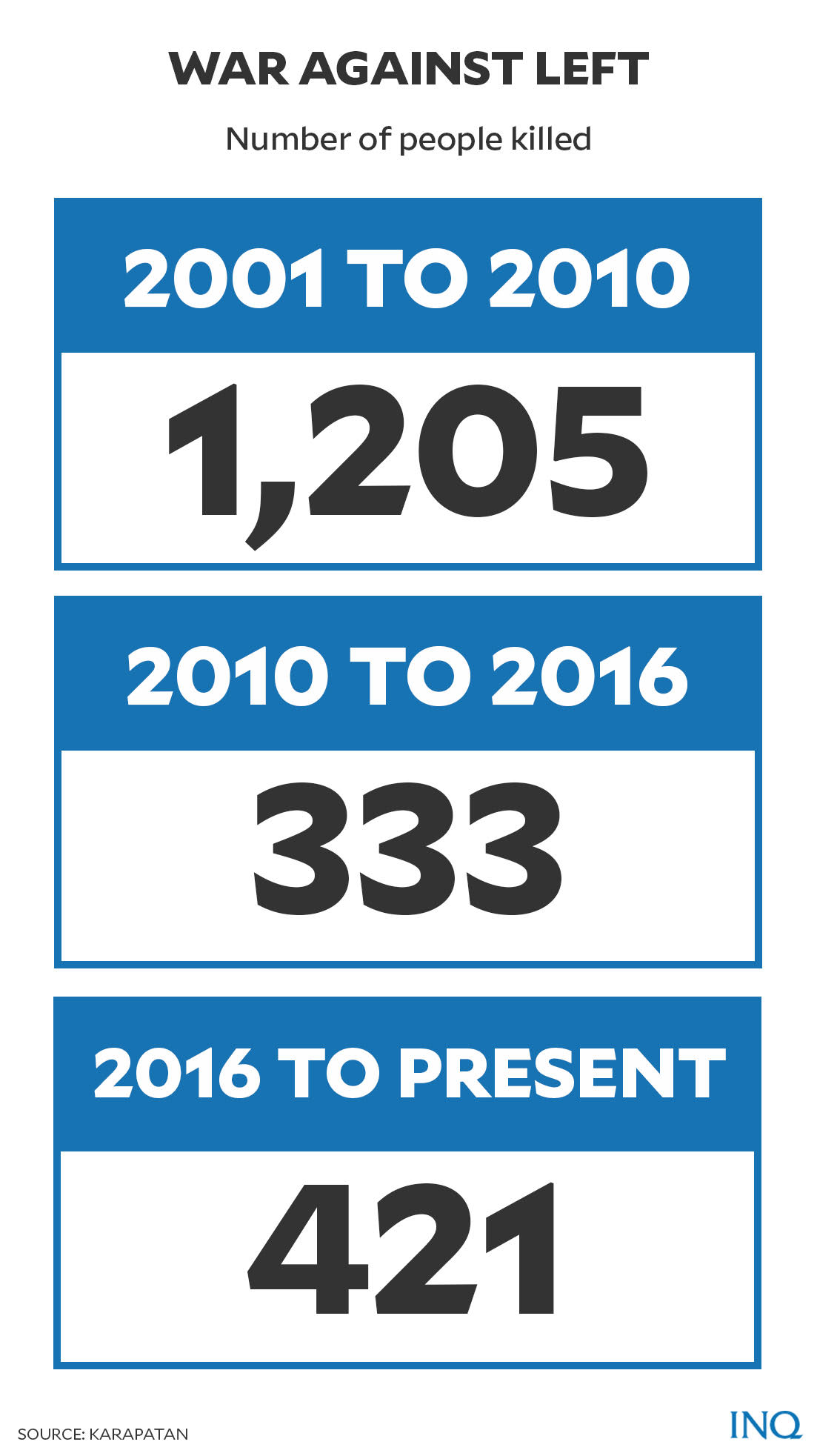 In September, the Philippines placed last (53rd) in Bloomberg’s COVID-19 Resilience Ranking with a score of 40.2.

The ranking was based on 12 indicators, including containment, deaths, health care quality, vaccination, severity of lockdowns and restrictions, and progress in easing travel and borders.

It said that the Philippines needs 1,581,096 daily vaccinations to reach its target of vaccinating 70 percent of the population by December 2021.

In Southeast Asia, the Philippines was one of the last to commence its rollout of vaccines. Singapore, which ranked first, started vaccination Dec. 30, 2020 while the Philippines, which was at seventh spot, started the same on Mar. 1, 2021.