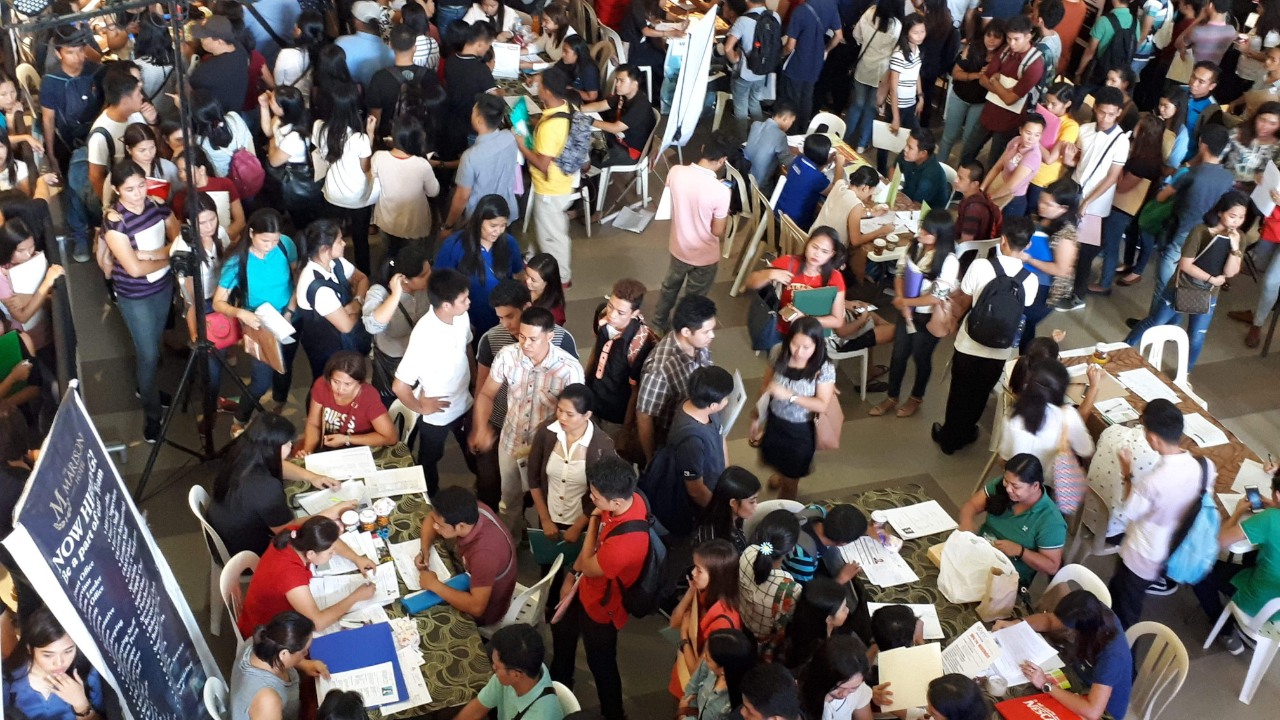 Jobseekers line up at a job fair. FILE PHOTO

This was how 51-year-old Ernie Batara Sr., expressed his pain, saying that “endless crises” left him hardly surviving since he was laid off.

He told INQUIRER.net that his work as a “weigher” of feed pellets in Isabela province ended as the company suffered losses because of the African swine fever.

He said while he received a separation pay, this was not enough, especially because he’s certain that it’s not easy to have a new job.

“Now, I’m helping my wife who works as a street vendor so that we’ll be able to thrive and make both ends meet,” he said. 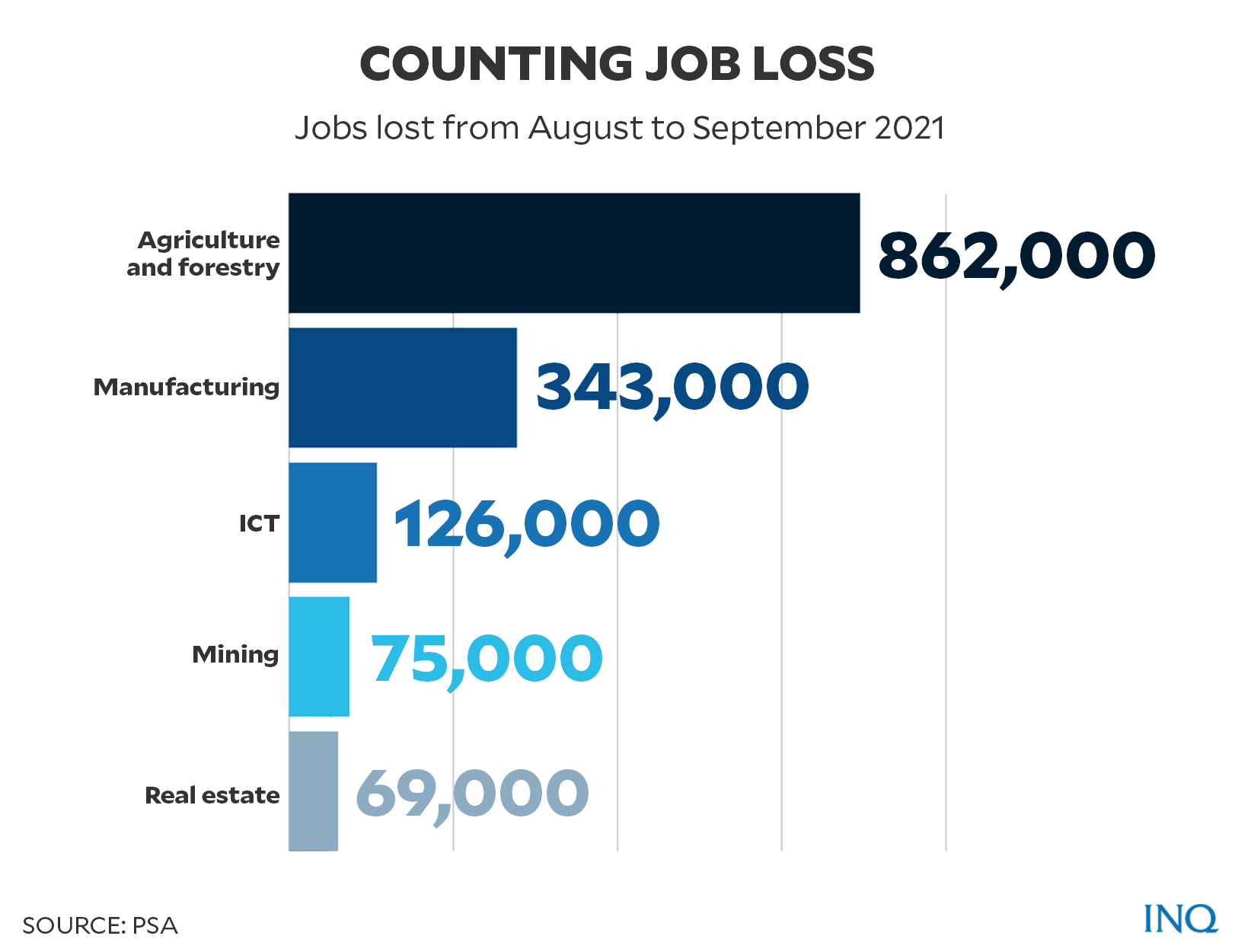 Batara, who has two children, was one of the 4.25 million unemployed Filipinos in September—higher than August’s 3.88 million and July’s 3.1 million.

National Statistician Dennis Mapa said the rate’s increase was because of several reasons, but he emphasized that agriculture and forestry had the “largest drop in employment”—9.85 million in August to 8.99 million in September.

READ: Unemployed swell to 3.9M in August due to lockdowns

“We saw that [it’s because] of the end of the harvest season and bad weather conditions,” said Mapa, explaining the “drop”.

The PSA also noted the lockdowns imposed in the Philippines, especially in Metro Manila, which was placed on Alert Level 4 in September.

Mapa said that while spikes in job losses were seen when there were restrictions, there have been “contributory factors”. 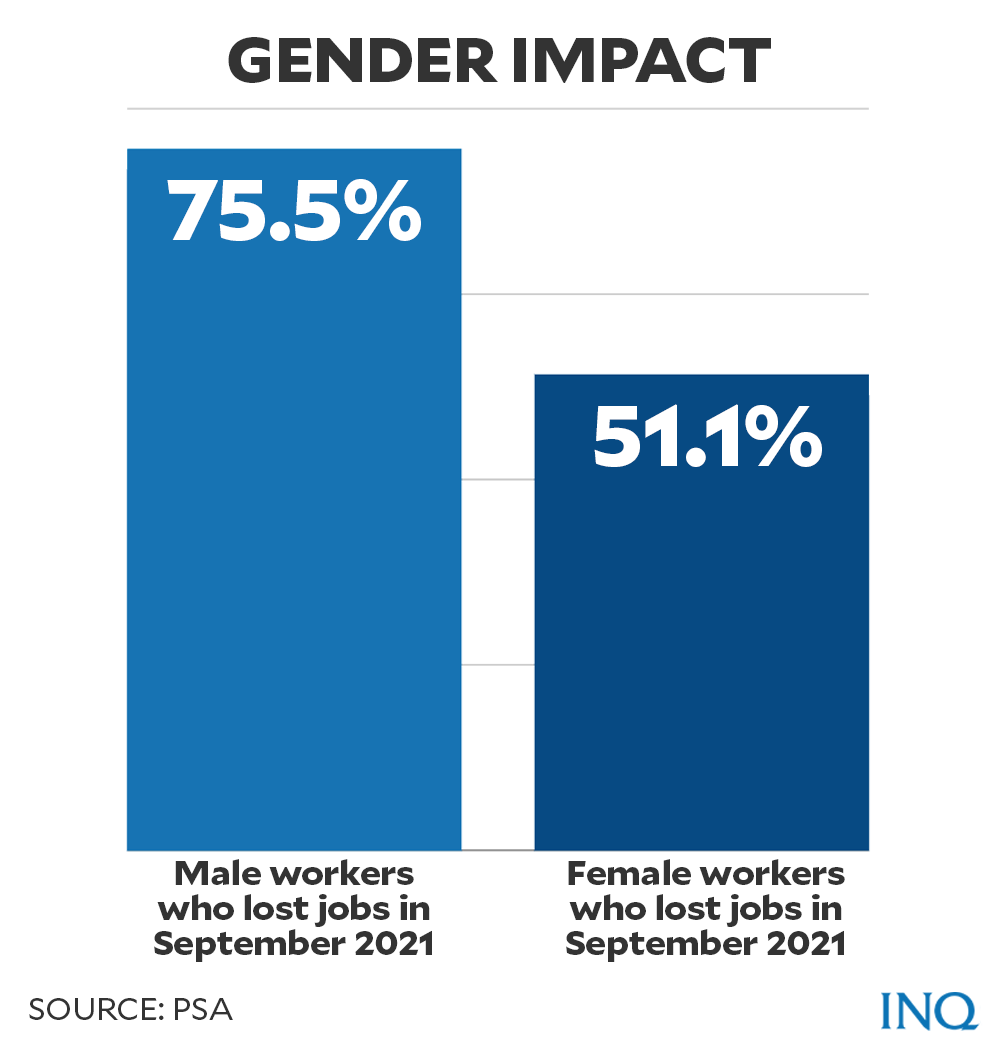 He explained that the biggest “contributor” was bad weather. The Philippine Atmospheric, Geophysical and Astronomical Services Administration said the Philippines was hit by typhoons Kiko and Jolina in September.

In 2020, the International Labor Organization said 10.9 million workers in the Philippines will “likely face job disruption” because of the COVID-19 crisis. 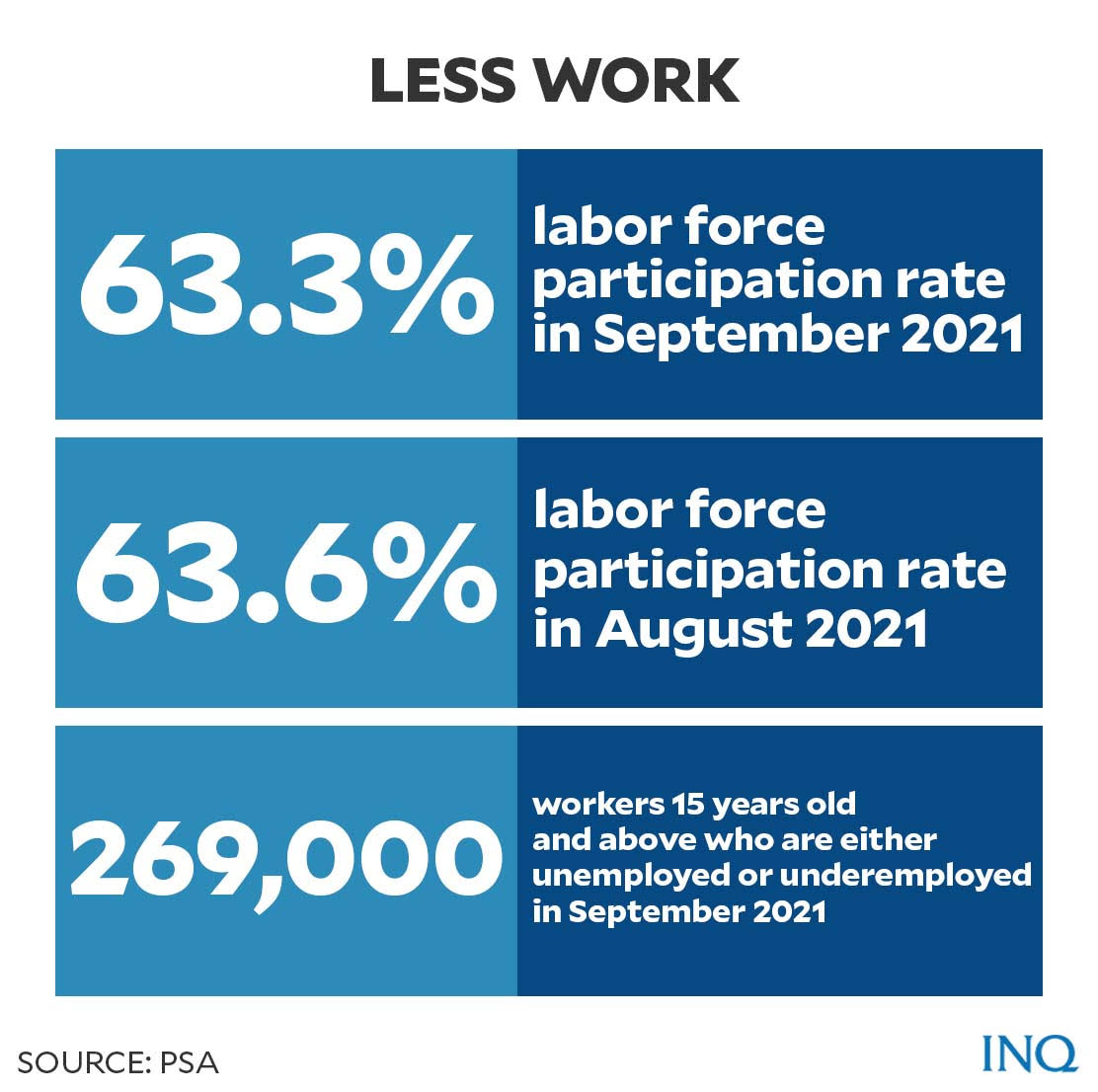 In August, when the jobless rate was 8.1 percent – Metro Manila, Laguna, Iloilo City, and Cagayan de Oro were placed on enhanced community quarantine (ECQ) while MECQ was imposed in Cavite, Lucena City, Rizal and Iloilo.

While the PSA said that there was also a drop in employment – 91.9 percent in August to 91.1 percent in September—there have been job spikes in several industries. 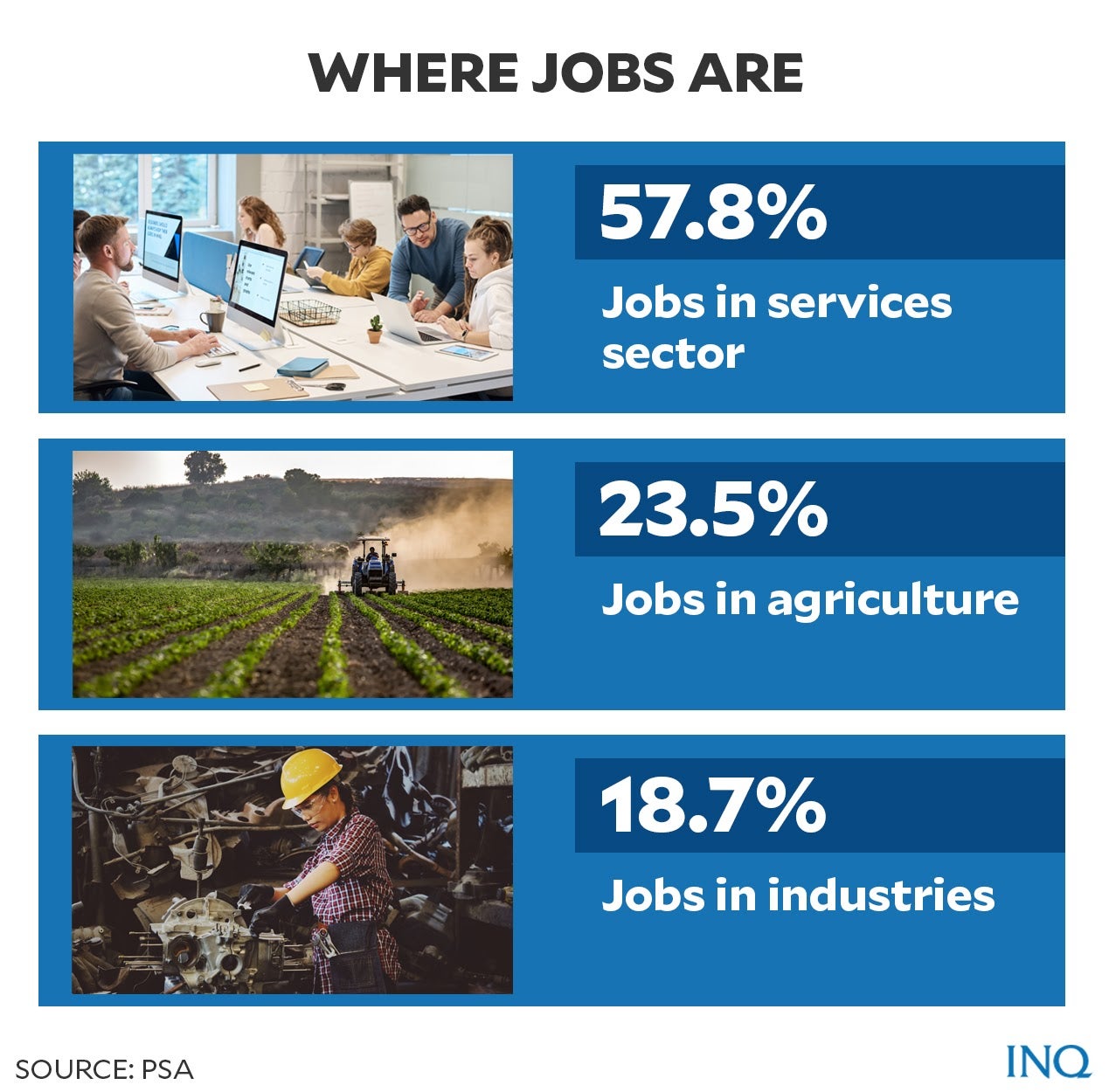 The industries with the largest increase in employment were wholesale and retail trade; repair of motor vehicles (9.50 million to 9.86 million), and public administration and defense; compulsory social security (2.63 million to 2.75 million. 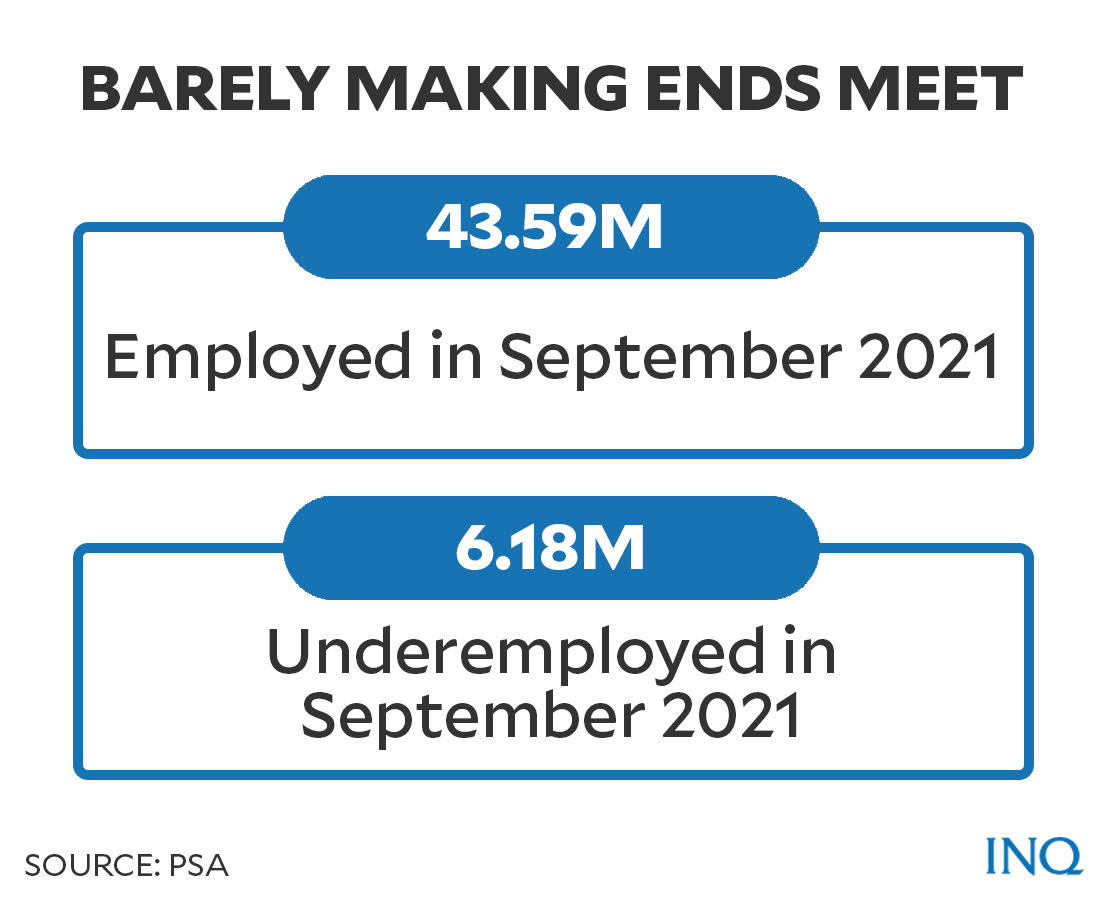 The PSA said the Labor Force Participation Rate “slightly dropped” at 63.3 percent – lower than the 63.6 percent in August but higher than the 59.8 percent in July.

Employed persons who worked for 40 hours and more were reported at 63.6 percent of the 43.59 million total employed, the PSA said. 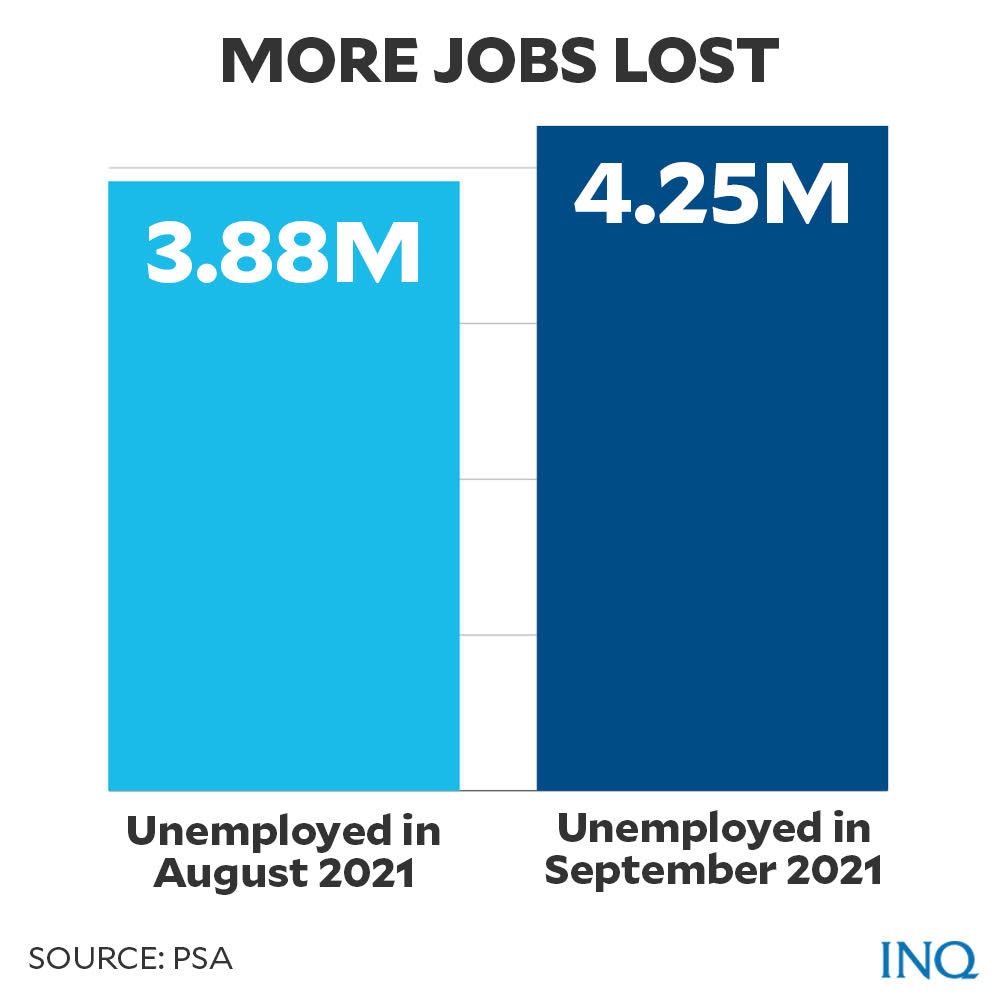 It also said that 34.9 percent worked for less than 40 hours and those reported with jobs but not at work accounted for 1.5 percent in September 2021. 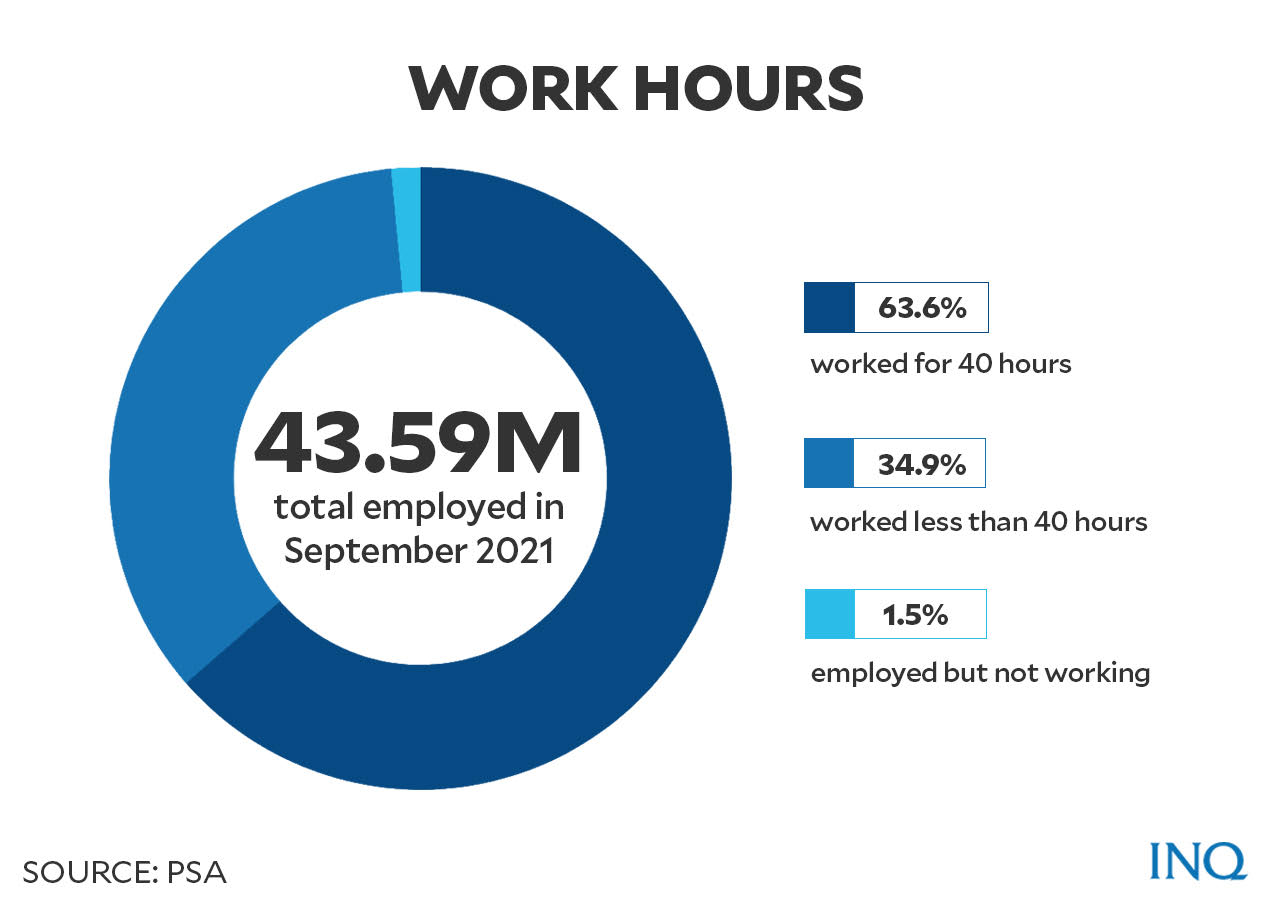 There was also a slight decline in underemployment – 14.7 percent in August to 14.2 percent in September. This translates to 6.18 million “underemployed persons.”