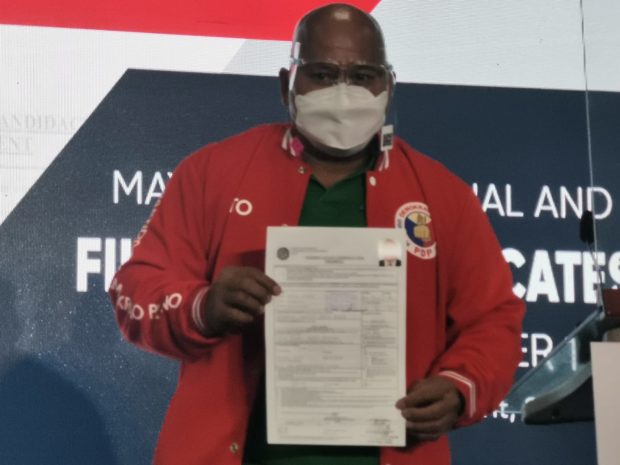 Senator Ronald “Bato” dela Rosa said this a day after surprising many when he filed his certificate of candidacy (COC) for president on Friday.

In an interview over DWIZ on Saturday,  Dela Rosa disclosed  that he only received the instruction to file his candidacy at 3 p.m.  or before the period for filing of COCs ended at about 6 p.m. on Friday.

The senator admitted he was also surprised by the last minute decision to be the administration’s bet for the 2022 presidential race.

He clarified, however, that his name had long been mentioned by the PDP-Laban faction led by Energy Secretary Alfonso Cusi as possible standard-bearer.

“But the decision talaga came out yesterday,” he said.

(At 3 o’clock, I got a call to file the certificate of candidacy. The filing coincided with the 3 o’clock prayer)

Aside from him, Dela Rosa said his running mate, Senator Christopher “Bong” Go, and another party mate, Senator Francis  Tolentino were also considered by the party as its standard-bearer.

But the final decision was only made Friday, Dela Rosa stressed.

(We are not aspiring for this. I did not plan this. I was just asked by our party to run so it’s up to the Lord. I leave it up to the Lord whatever happens to me.)

“Basta ako, hindi ako umaatras. I am a good soldier, given the instructions to do this then I’ll do it. Yun lang naman po ang papel ko dito so andito na tayo,” he added.

(I am not backing out. I am a good soldier, given the instructions to do this then I’ll do it.  That’s my only role here)

In the same breath, Dela Rosa said he is willing  to “give way” to presidential daughter and Davao Mayor Sara Duterte-Carpio should she later decide to join the presidential derby.

Commission on Elections’ Resolution No. 10717  allows withdrawal of a COC by a candidate belonging to a political party and be substituted by another member until November 15.

Duterte-Carpio, who already filed her reelection for mayor in Davao City under her regional party, Hugpong ng Pagbabago, used to be part of PDP-Laban now being chaired by her father, President Rodrigo Duterte.