4 rescued from capsized speedboat in Tawi-Tawi 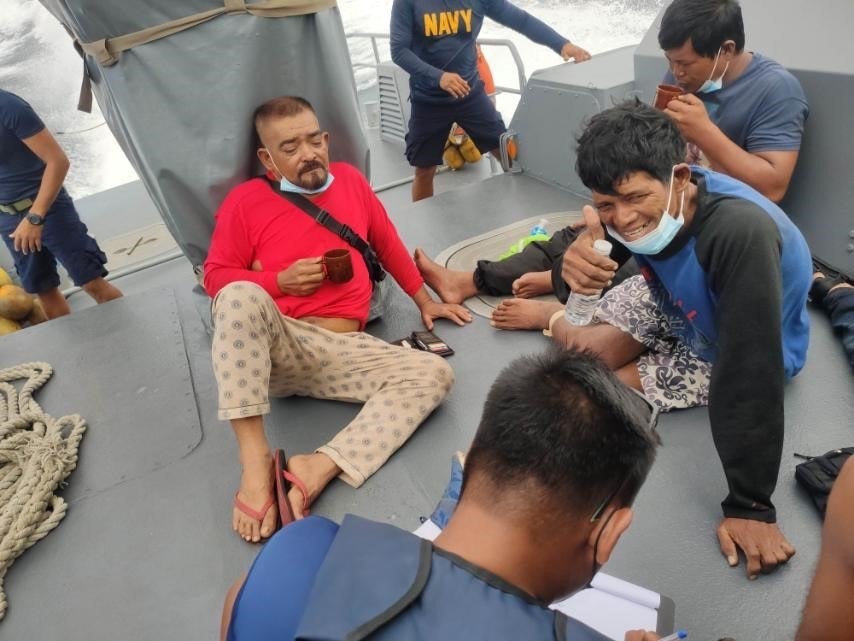 Two Malaysians and two Filipinos were rescued in the seawaters off Sibutu Passage in Tawi-Tawi province morning of October 8, when their boat capsized in the area due to bad weather. Photo credits to Naval Forces Western Mindanao.

ZAMBOANGA CITY, Zamboanga del Sur—Two Malaysian nationals and two Filipinos were rescued from a capsized speedboat in the vicinity of the seawaters off Sibutu Passage, Tawi-Tawi province on Friday.

Rear Admiral Toribio Adaci Jr., commander of Naval Forces Western Mindanao (NFWM), said they received a call from a commercial vessel that a speedboat that came from Sabah en route to Bongao via Sibutu capsized due to bad weather and unfavorable sea condition at around 6 o’clock in the evening of Thursday (October 7).

He added that the vessel sank with its light cargoes,  leaving the four passengers floating in the water for 15  hours.

All four passengers suffered minor injuries and were exhausted after long hours of floating at sea while waiting to be rescued.

The two Malaysians were identified as Hassan Bin Sayadi, 59, and Majid Bin Ajahun, 46. The two Filipinos are Jerry Erni, 35, and Solar De Leon, 40.

“Without the report of the commercial vessel and the rescue effort of the Philippine Navy, maybe we are already dead.  This is our second life and we owe this to you,” said a teary-eyed Hassan Bin Sayadi in Malay.

Upon arrival of BA488 and PC392 at Lamion Wharf, Bongao, the rescued individuals were turned over to the Fleet Medical Team of Naval Task Group Tawi-Tawi for proper medical attention.

Adaci commended the officers and men of NTF-61, BA488, PC392, 3rd Boat Attack Division, Littoral Monitoring Station in  Bongao and the commercial vessel for their timely reporting of the incident and the successful search and rescue operation.  He encouraged the troops to sustain their readiness to respond to emergencies at sea.