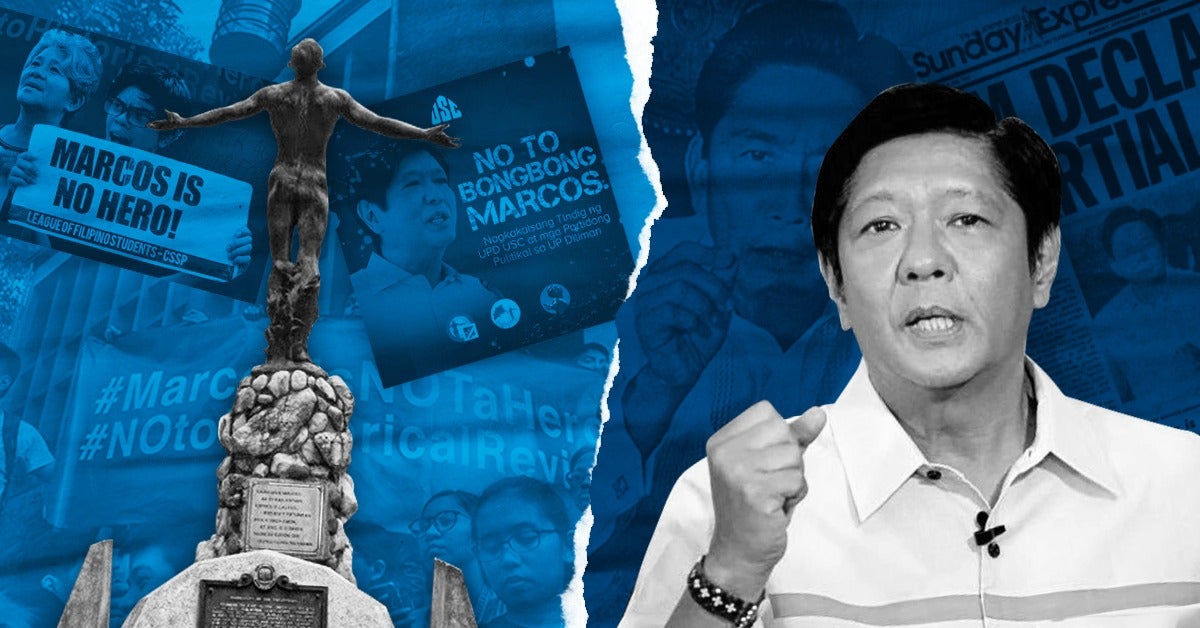 MANILA, Philippines — A year before former strongman Ferdinand Marcos opened the darkest chapter in Philippine history, he had already faced staunch defiance: The country’s premier state university, whose students and faculty led an uprising now known as the 1971 Diliman Commune, became quite the ineradicable thorn in his side.

Five decades later, a new generation of student leaders is raising the barricades of resistance once more.

The highest student representatives of the University of the Philippines (UP) seek to honor their heritage by launching a resolute campaign to prevent the late dictator’s son and namesake from returning to power and absolving his family’s place in history.

In a unity statement on Friday (Oct. 8), the UP Office of the Student Regent (OSR) and all seven university student councils called the presidential bid of Ferdinand “Bongbong” Marcos Jr. in the 2022 national elections an “ambitious attempt to regain power and influence.”

“This apparent revival of Marcoses in power and the attempt to seize the Malacañang office again reeks [of] desperation and demands us to condemn such [an] audacious pronouncement outrightly,” their statement read.

NO TO MARCOS! Unity Statement of UP OSR and USCs of the UP SystemYesterday, Bongbong Marcos, the son of the late…

Posted by UP Office of the Student Regent on Thursday, October 7, 2021

Bongbong Marcos, a former senator and defeated vice presidential candidate in 2016, promised that he will “bring a unifying leadership back to the country” once elected to the same post his father held for 21 years.

His announcement earned the ire of various critics and victims of his father’s tyrannical rule, accusing the Marcoses and its loyalists of touting their own version of history. For UP’s student leaders, Bongbong Marcos’ bid is a “deliberate insult to the victims of martial law and the collective suffering that [the] nation underwent during their regime.”

“As many members of the UP community were martyred during the Marcos dictatorship and as many remain missing up to this day, we must continue the longstanding fight of our nation to hold the Marcoses accountable for their atrocities during one of the darkest times of the nation’s history,” their statement read.

It comes as no surprise that UP, whose historic role in the overthrow of the Marcos dictatorship immortalized its reputation as the country’s bastion of student activism, has renewed its crusade to stop the late strongman’s family from regaining national authority.

In a rare display of unity, UP Diliman’s university student council and its three major political parties have come together to denounce the atrocities that happened under martial law and encourage other students to join the wider campaign against the Marcoses.

(The only golden chapter in this era was the blazing activism of tens of thousands of Filipinos […] The new generation of students is ready to hold the Marcoses accountable for their crimes and corruption against the people.)

Meanwhile, about 31 organizations from UP Manila also joined forces to counter Bongbong Marcos’ bid three days before his official declaration, hitting the presidential aspirant’s “desperate attempts” to win a government position while acknowledging the sacrifices of former student leaders who struggled against the kleptocracy.

“The power-hungry Marcos family will always jump at any opportunity to reclaim authority […] We will learn from history and vow that we will oppose the Marcos family’s return to power at every step of the way,” their statement read.

The premier state university, which maintains a deep-rooted tradition of standing up against campus militarization and human rights violations, is no stranger to political siege. Almost fifty years since the imposition of martial law and nothing has changed: UP continues to face accusations of being a “breeding ground for terrorist activities.”

READ: ‘No ground for tyrants:’ UP community denounces DND scrapping of 1989 pact

UP quickly stood its ground when the Department of National Defense (DND) unilaterally scrapped last January the long-standing UP-DND Accord, which prohibits state forces from operating in any of its campuses. Justifying the abrogation, Defense Secretary Delfin Lorenzana claimed that “there is an ongoing clandestine [communist] recruitment inside UP campuses nationwide.”

The 1989 pact, which UP Diliman Chancellor Fidel Nemenzo regarded as “a democratic response to the suppression of the university and of freedoms during martial law,” is a product of student activism during the Marcos regime.

Last September, UP held a week-long online commemoration of the 49th year of martial law to honor the individuals who fought against the dictatorship and to “set the record straight” regarding the myths of the darkest period in the country’s history.

Student Regent Renee Co, the sole representative of the student body in the UP Board of Regents, believes that Bongbong Marcos will use the family’s ill-gotten wealth to elevate themselves to greater power.

But the Marcoses will see resistance, she said, both from UP students and the Filipino people.

“We will not let the victims, the disappeared, the ones who fought for justice against systematic abuse, and our collective historical trauma brought by his family’s greed and directly enabled and supported by BBM himself be buried and forgotten,” Co said.

A member of opposition coalition 1Sambayan’s youth arm, Co and other youth convenors recently met with Vice President Leni Robredo, who formally declared her presidential bid as an independent candidate, to forward the so-called “Youth Agenda”—a comprehensive list of calls that the united youth will bring in the 2022 polls.

Co said Robredo, whose motivations for running for president include stopping the Marcoses from staging a political comeback, responded positively to their demands and “shared the importance in seeing [their] campaigns bear fruit.”

Asked why forging unities for the upcoming elections is important, Co said the strong collaboration between various multi-sectoral groups to enact meaningful changes will “improve the life of every Filipino.”

The youth vote will prove more important than ever in the upcoming polls as they now comprise 52 percent of the total registered voters, based on the most recent election data.

UP’s highest student representative bodies, in their statement, called on everyone to join their campaign against “false narratives and historical revisionism.”

“We must stand firm in holding [the Marcoses] accountable and continuously fight against the distortion of historical facts through our collective actions,” they said.