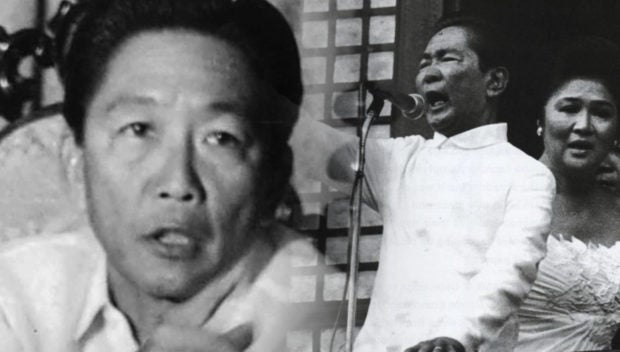 MANILA, Philippines—Since 2015, there’s been an attempt to paint Ferdinand Marcos’ dictatorship as a golden age for the Philippines through tweaked facts and outright lies.

While thousands consider the Marcos years as the darkest time in Philippine history, his family and loyalists are using mainly social media as a platform to foist their version of history on the rest of the nation.

This day, Sept. 21, Filipinos mark the 49th year Marcos threw the nation into its darkest period through Proclamation No. 1081 declaring martial law.

Prof. Judy Taguiwalo, convener of the Campaign Against the Return of the Marcoses and Martial Law, said “our collective memory clearly remembers” what the more than 20-year dictatorship inflicted on the Philippines.

Marcos was elected president in 1965. From 1965 to 1971, the year before martial law was declared, the economic growth of the Philippines, as reflected by its gross domestic product (GDP), ranged from 5.27 percent to 5.43 percent.

It was in 1973 and 1976 when GDP hit 8.92 percent and 8.81 percent, which Marcos’ son and namesake, Bongbong, claim as proof of his father’s achievements. But he obviously skipped the part that would show some of the Philippines’ worst recessions also took place under the dictator.

In 1984 and 1985, the first two years after the murder of senator Benigno Aquino Jr, Philippine GDP contracted to negative 7.32 percent and negative 7.04 percent.

Here’s the Philippines’ GDP from 1965 to 1986, based on data from the World Bank and Organization for Economic Cooperation and Development: 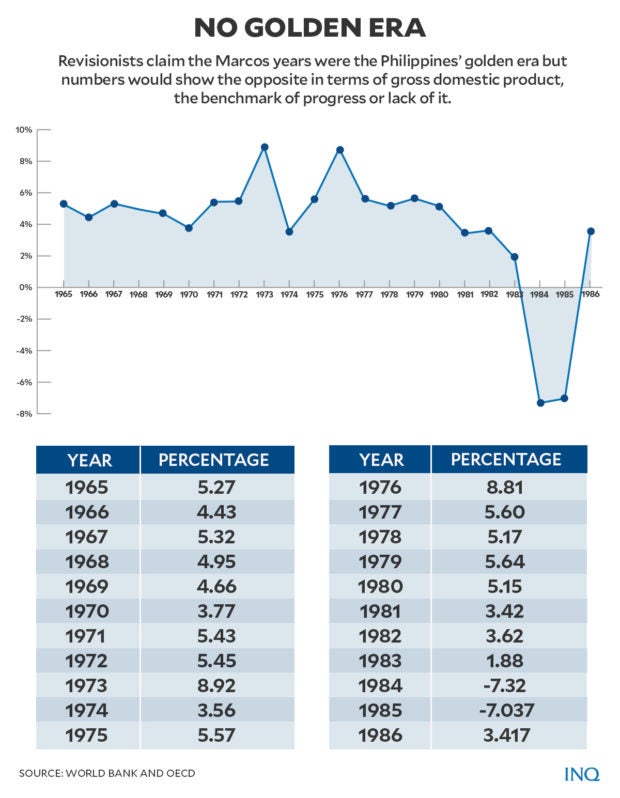 Professor Emmanuel de Dios, of the University of the Philippines’ School of Economics, said this was the reason the record of Marcos should not be viewed in morsels of good numbers.

READ: Marcos: Rise and fall of a dictator

“You have to take the entire period,” De Dios told ABS-CBN News in 2017. “You did experience high growth in the early years, but you also experienced the worst recession in latter years,” he said. 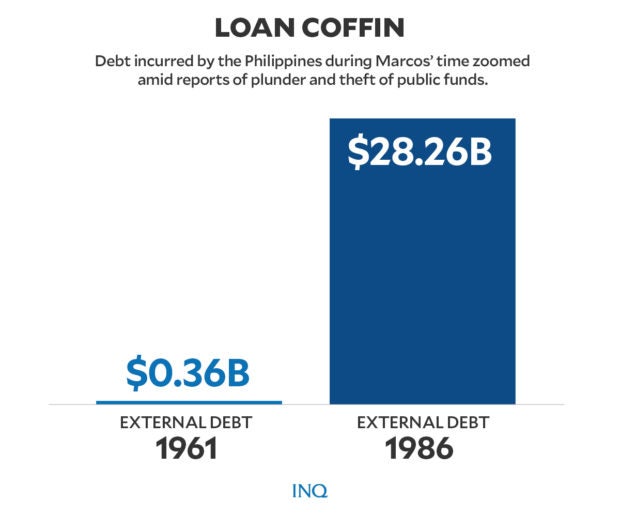 It said the increase in “our debts explains the growth, especially in infrastructure, primarily touted by some to assess the economic gains of the Marcos regime.”

“A debt-driven growth is growth that sacrifices long-term benefits for short-term gratification, and ultimately leads to more burden than boon for the future generations that must pay these debts,” the Martial Law Museum said.

It likewise said that because “power was in the wrong hands,” the declaration of martial law and the suspension of the writ of habeas corpus “opened the real possibility of the violation of civil rights.”

The writ, which in Latin refers to “having the body,” is a protection against illegal imprisonment.

The media, extremely essential for any democracy, were likewise silenced by the dictatorship.

“By shutting down competing voices and setting up a media outlet that was under his control, Marcos silenced public criticism and controlled the information that the people had access to,” the Martial Law Museum said.

“By doing so, Marcos had the final say in whatever passed for the truth,” it added.

Marcos lost no time enforcing the crackdown on media. On Sept. 18, 1972, he issued Letter of Instruction No. 1 allowing the military to take over media, mainly ABS-CBN and Channel 5. 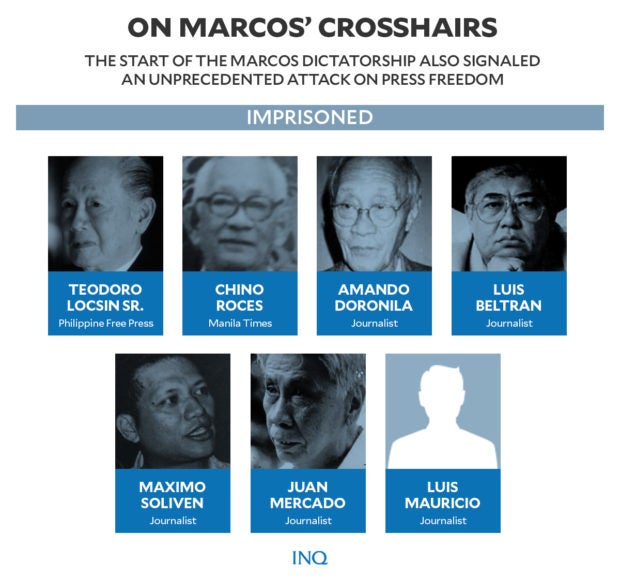 Some news outlets were allowed to operate, especially those that were owned by Marcos’ friends like Roberto Benedicto of the Kanlaon Broadcasting System and the Philippine Daily Express.

According to the Human Rights Violations Victims’ Memorial Commission (HRVVMC), 579 businesses were likewise “violently and illegally” taken over by the dictatorship.

In 2015, when the dictatorship was raised as an issue in the coming 2016 elections, Bongbong said there was nothing to apologize for because his father was not a liability but an asset.

But the Martial Law Museum said “poverty worsened” over the course of the dictatorship, emphasizing that six out of 10 families were poor by the time the Marcos regime ended, an increase from the four out of 10 families before Marcos took office in 1965.

These declines happened in the years when prices of goods were surging especially in the last 10 years of the dictatorship.

After the Edsa People Power, a revolt that ended the more than 20-year reign of the Marcoses, reports documenting the family’s flight and arrival to Hawaii said crates of belongings, worth billions of pesos, were transported, too.

The Association for Diplomatic Studies and Training, in the report “The End of an Era – Handholding Ferdinand Marcos in Exile,” said the United States Customs found 24 crates with gold bricks and diamond jewelry.

“Certificates for gold bullion valued in the billions of dollars were allegedly among the personal properties he, his family, his cronies and business partners surreptitiously took with them when the US provided them safe passage to Hawaii,” the report said.

This narrative was strengthened when Marcos’ close confidante, the late industrialist Enrique Zobel, submitted a 14-page affidavit to the Senate blue ribbon committee.

A report by ABS-CBN News said the dictator left his family—widow Imelda and children Bongbong, Imee and Irene—with $35 billion worth of gold bars in 1989.

In reports by international newspapers The Guardian and Washington Post, it was said that the Marcoses carried with them essential belongings, including cash and gems (some of which were in diaper boxes), 70 pairs of jeweled cufflinks and enough clothes to fill 67 racks.

The World Bank and UN Office on Drugs and Crimes said Marcos, having the longest reign as dictator, stole between $5 billion and $10 billion from the country’s coffers.

The corruption was so outrageous that it earned the distinction of being “The Greatest Robbery of A Government” from the Guinness World Records.

On Dec. 21, 1990, the Swiss Federal Supreme Court decided that the dictator and his family hid $356 million in Swiss banks. The Philippine Supreme Court, in 2003, allowed the forfeiture of the finances in favor of the government of the Philippines.

In 2018, the anti-graft court Sandiganbayan convicted the dictator’s widow of seven counts of graft related to private foundations established in Switzerland while she was a government official from 1978 to 1984.

She was sentenced to imprisonment of six years and one month to 11 years for each count, but she has served none after posting bail worth P300,000.

The Presidential Commission on Good Government, an office created by the late former President Corazon Aquino to go after the ill-gotten wealth of the Marcoses and their cronies, said in 2018 that P171 billion has already been recovered.

The dictatorship was deadly, especially for those who stood against Marcos who were either killed or went missing.

According to HRVVMC, 11,103 individuals had fallen victims to rights violations by the dictatorship.

The count, however, covered only those with approved claims for compensation from the Human Rights Reparation and Recognition Act of 2013.

HRVVMC data showed that 2,326 were either killed or disappeared, never to be found. AI said at least 3,200 innocent people were killed.

The Families of Victims of Involuntary Disappearance said that from 1971 to 1986, at least 878 people went missing and are now considered as desaparecidos, or the disappeared.

HRVVMC said there were 699 and 1,417 approved claims for those victims of illegal detention during the Marcos dictatorship.

But AI counted at least 70,000 people who were wrongly imprisoned by the Marcos regime.

But AI, a recipient of the Nobel Peace Prize in 1977, said there were 34,000 individuals tortured by the dictatorship.

• Electric Shock – Oftenly used, this involves electric wires attached to fingers and the genitalia of the victim. Sometimes, the wires were attached to the arms and the head.

• San Juanico Bridge – Between two beds, the victim lies and if his/her body “falls or sags,” the victim will be beaten.

• Truth Serum – Done at the V. Luna General Hospital, it prompts the victim to “talk drunkenly.”

• Russian Roulette – The victim is forced to aim a revolver with a bullet at his/her own head and then pull the trigger.

• Beating – A group of soldiers would beat with “fists, kicks and karate blows” manacled victims.

• Pistol-Whipping – A victim is beaten with rifle butts.

• Strangulation – Constriction of the neck done by hand, electric wire and steel bar.

• Cigar and Flat Iron Burns – A victim is inflicted with heat.

• Pepper Torture – A “concentrated peppery substance” is placed on the lips and genitals.

• Animal Treatment – Victims are manacled and caged like beasts.

“The nation is again living in such dark times, even darker to what we endured under Marcos’ rule,” Selda said.

Xandra Bisenio, daughter of martial law victim Rey Casambre, said as violations that were the mark of the dictatorship continue to be committed, “it shows that the system has not, at the very least, changed.”

“It has gotten worse, considering that even without having to declare martial law today, the law has been weaponized to persecute activists,” she said.