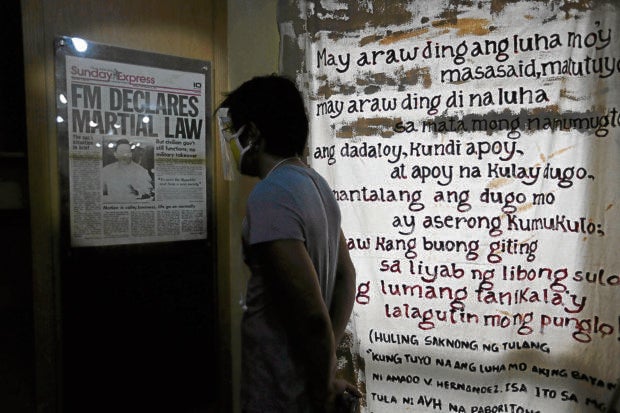 ‘NEVER LET IT HAPPEN AGAIN’ The defunct Sunday Express of Sept. 24, 1972, reporting on Ferdinand Marcos’ declaration of martial law the night before, and a reproduction of National Artist Amado V. Hernandez’s famous elegy, “Kung Tuyo na ang Luha Mo, Aking Bayan,” are among the mementos of Marcos’ martial law regime featured at the Bantayog ng mga Bayani Museum in Quezon City. This week the nation commemorates that era amid warnings of its possible return. —JOAN BONDOC

MANILA, Philippines — Several Catholic bishops on Sunday urged Filipinos not to forget the lessons of martial law, which was declared by the late dictator Ferdinand Marcos 48 years ago, amid charges that the Marcoses are bent on revising history to erode its horrors through social media.

“We have to learn from martial law and live its lesson, that we should never let it happen again,” said Balanga Bishop Ruperto Santos.

Retired Sorsogon Bishop Arturo Bastes said: “This ignominious period of our history must be taught as a subject to our young students to warn them that never again should martial law be imposed in our country.”

While “patriotic and mature Filipinos” have learned a lot of lessons from martial law, especially those who suffered from its atrocities, still many of them seem to have a short memory of the horrors of the one-man rule, he said.

Marcos declared martial law on Sept. 23, 1972 — thereafter issuing Proclamation No. 1081 which was antedated to Sept. 21 — and effectively established a dictatorship propped up by the military and his cronies.

He lifted it in January 1981, but it was not until the assassination of his rival Benigno Aquino Jr. in 1983 that the protest movement against his regime was reignited anew, culminating in the 1986 People Power Revolution.

In Panay, religious organizations and progressive groups will hold protest actions to mark the 48th anniversary of the declaration of martial law on Monday, warning that authoritarian rule “is very much alive” under the Duterte administration.

Groups and personalities under the Panay People’s Coalition will gather at the Iloilo Sunburst Park before marching along the main streets of Iloilo City.

Among those joining the protests are leaders of religious denominations, human rights organizations and advocates, opposition political parties and martial law survivors.

“The nightmare of the Marcos dictatorship still haunts us today under the Duterte administration who is conniving for the full restoration of the Marcoses to power,” said Elmer Forro, secretary-general of Bagong Alyansang Makabayan in Panay.

The coalition said tyrannical rule was growing under the Duterte administration, especially with the enactment of the Anti-Terrorism Act of 2020. At least 30 petitions have been filed before the Supreme Court to declare the law unconstitutional for violating basic civil liberties. 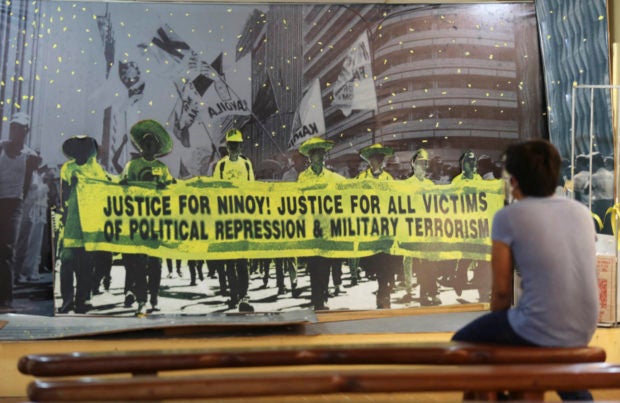 NEVER FORGET A visitor to the Bantayog ng mga Bayani Museum in Quezon City sits before an enlarged photograph of a protest rally on Ayala Avenue in Makati. Soon after the Aquino assassination in 1983, the Makati business center’s main road became a popular protest site, especially on Fridays when office workers threwconfetti from their high-rise offices in support of the demonstrators. —JOAN BONDOC

The protest actions will also be held to condemn the continued attacks on political dissenters many of whom have been killed even amid strict community quarantine measures due to the COVID-19 pandemic.

“No arrests have been made more than four months after [Jose Reynaldo “Jory” Porquia] has been killed and a month after Zara Alvarez was gunned down,” Forro said.

Porquia, Iloilo City coordinator of the party list group Bayan Muna, was shot and killed by masked men inside a rented cottage in Arevalo District in Iloilo City on April 30. He was leading food relief efforts in communities hardest-hit by quarantine measures.

A masked man gunned down human rights defender Zara Alvarez on her way to her boarding house in Barangay Mandalagan in Bacolod City on Aug. 17. She had documented the killings and arrests of lawyers, farmers, workers and religious persons on Negros Island even as she had repeatedly received death threats and was subjected to Red-tagging.

“We need to continue to protest and decry these attacks because the pandemic has not stemmed the killing of activists and those critical of the Duterte regime,” he said.

“I think we have not learned our lessons. People are not vigilant and are not courageous enough to speak out. They do not vote seriously. They allow themselves to be bullied,” Bishop Broderick Pabillo, Manila Archdiocese apostolic administrator, said in an interview.

“We have to value our freedom, defend and promote it. But sad to say, we tend to forget and take it for granted,” said Santos, citing some political leaders “who are self-serving, using their position to enrich and prolong their power.”

“And we allow ourselves to be bought during elections or we just keep silent instead to speak about abuses,” the prelate said.

An alliance of the largest labor groups Kilusang Mayo Uno, Nagkaisa! Labor Coalition and Pagkakaisa ng Uring Manggagawa, will hold a protest action at the Commission on Human Rights in Quezon City on Monday.

“This is in memory of the thousands of workers, who have died, and thousands more who went missing, were tortured and got arrested during martial law, at the height of the Marcos dictatorship and the intensifying attacks against workers,” United Workers said in a statement.

It said the demonstrators would also bring pictures of the trade unionists and workers who have been killed, tortured and are currently detained by the Duterte administration. Nagkaisa said it was grateful for the European Union’s support for the human rights struggle as it reiterated the cry of the workers and their trade unions, “never again to martial law, never again to another dictatorship like that of Marcos rule.”

—With a report from Nestor P. Burgos