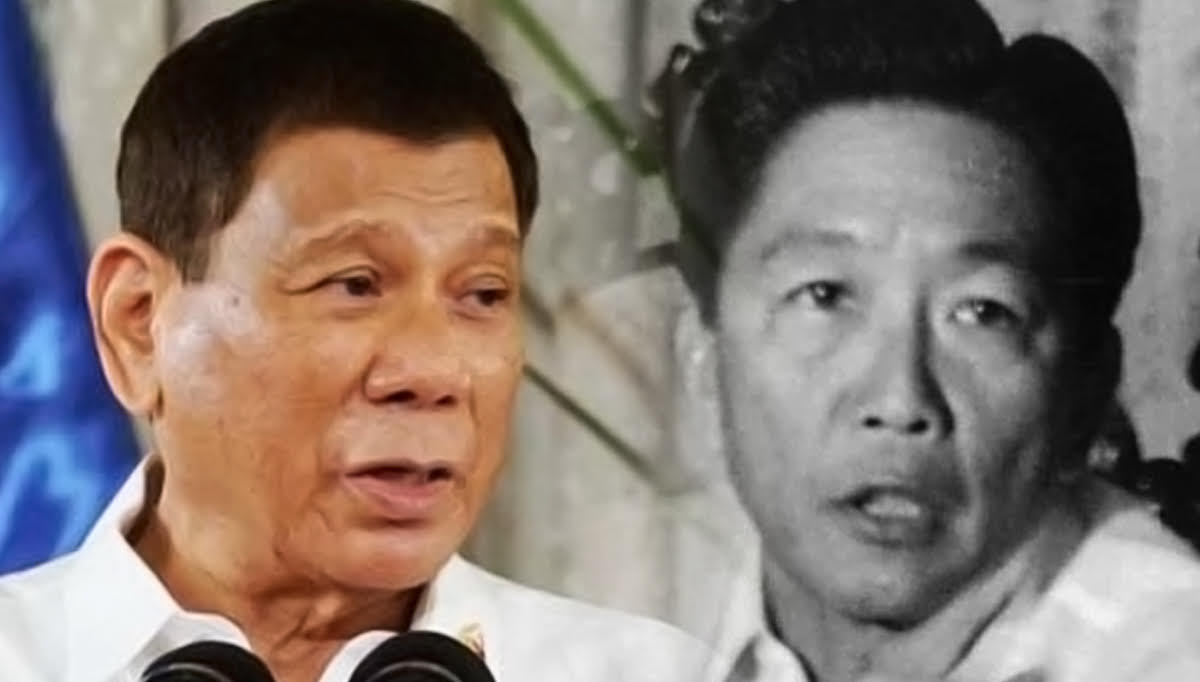 MANILA, Philippines—Tyranny, for survivors of martial law under the late dictator Ferdinand Marcos, has taken a new face—that of President Rodrigo Duterte, a populist leader whose conviction is not to let concerns over human rights get in the way of his fight against drugs and crime.

Under Marcos, who ruled the country for more than 20 years, at least 11,103 had been documented to fall victims to rights violations ranging from murder, incarceration to torture.

In just five years under Duterte—July 2016 to June 2021—thousands had already fallen victims to a counterinsurgency campaign that had been expanded to also target noncombatants, above ground activists of the Left and suspected communist rebel sympathizers, according to the human rights group Karapatan.

Many of the victims who had been either incarcerated, disappeared, falsely charged or murdered by the Marcos dictatorship find themselves going through the nightmare again.

Lawyer Edre Olalia, president of National Union of People’s Lawyers (NUPL), said 49 years since the declaration of martial law, the disregard and abuse of human rights in the Philippines have become “unbelievably worse.”

“The means and methods of oppression and repression,” he said, had been “tweaked by populist pretenses and legal hypocrisy.”

Since the day Duterte took office, 414 activists have been killed, 497 were attacked and survived, 223 have been tortured, 1,126 were illegally arrested and detained, while 523 have been physically assaulted and wounded. 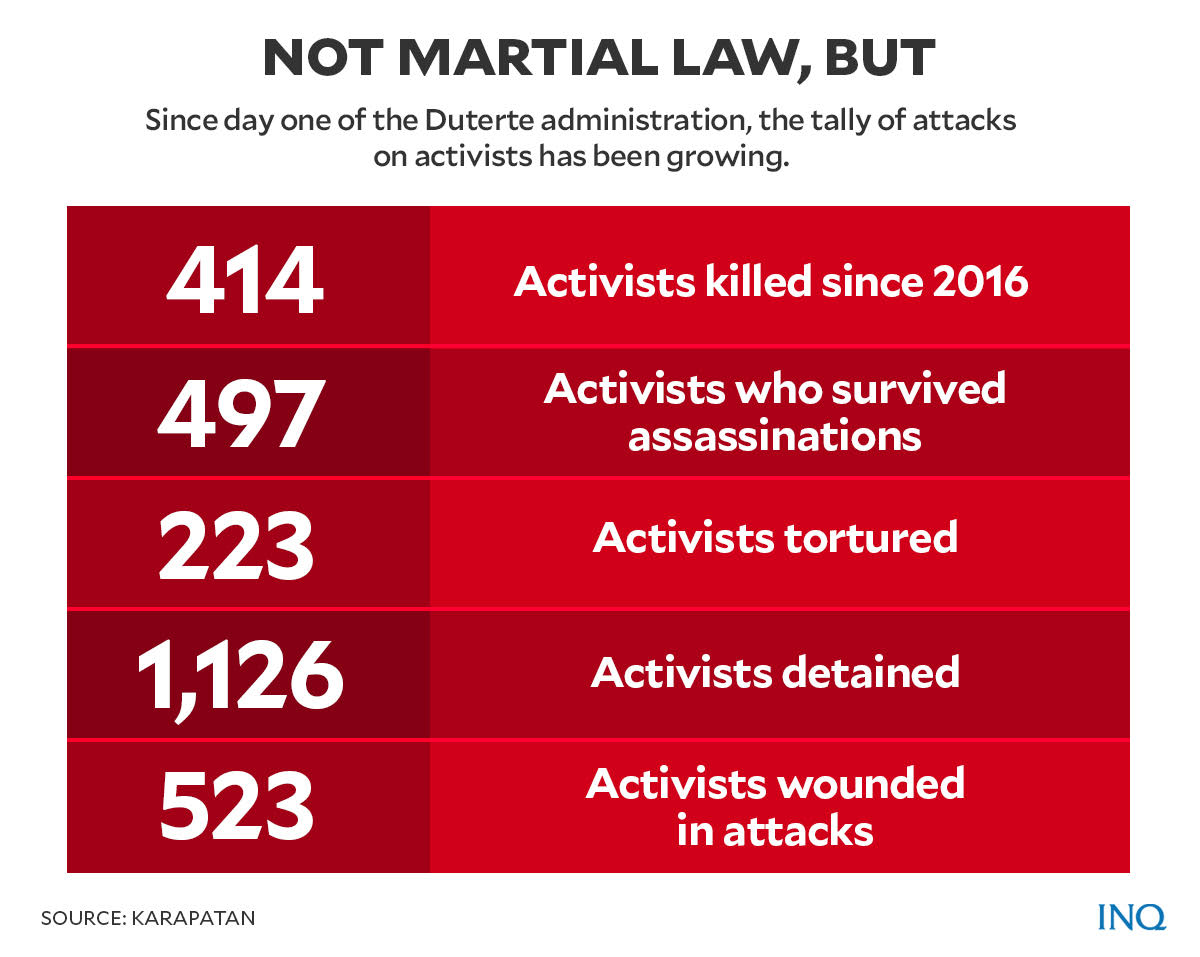 These included individuals who survived the horrors of martial law, which was declared on Sept. 21, 1972 and kept the Marcoses in power for more than 20 years until people’s anger over massive abuses and plunder of the nation’s wealth boiled over in 1986 and led to a peaceful revolt that drove the Marcos family into exile.

One of them was Vicente Ladlad, an activist who had been imprisoned and tortured under the Marcos dictatorship who was again arrested in 2018, Duterte’s second year in office, for what his wife, Fides Lim, described as “fabricated cases.”

Released in 2016, Ladlad served as peace consultant for the underground National Democratic Front of the Philippines (NDFP) and was arrested in 2018 along with couple Alberto and Virgina Villamor in Quezon City.

They were arrested by teams of the Philippine National Police (PNP) and the Armed Forces of the Philippines (AFP) through a search warrant issued by Quezon City Regional Trial Court Executive Judge Cecilyn Burgos-Villavert.

The police and military claimed finding and seizing high-powered firearms, grenades and “subversive documents” from Ladlad but Lim said those were “planted evidence.”

Almost three years later, in 2021, the Anti-Terrorism Council (ATC), a government office created by the now controversial Anti-Terror Act of 2020, tagged Ladlad as a terrorist.

Lim said that as a result of the ATC classification of Ladlad as a terrorist, the Anti-Money Laundering Council (AMLC) froze his bank deposits which contained the compensation he received from the Human Rights Victims’ Claims Board for abuses he suffered during martial law.

READ: No standards under anti-terror law, IRR to determine what acts are terrorism

A list by the Human Rights Violations Victims’ Memorial Commission said during martial law, Ladlad was among those who had been tortured, rendered incapacitated for work, kept in secret detention and solitary confinement, held incommunicado and detained “where torture may be carried out with impunity.”

Last Sept. 15, Adelaida Magpatoc, another survivor of martial law, was arrested in Bukidnon province for alleged robbery with double homicide and damage to property.

A warrant of arrest dated Sept. 3, 2001 from the Agusan del Sur Regional Trial Court was served against her by the military and police.

A victim of the Marcos dictatorship, Magpatoc was 24 years old and two months pregnant when she was arrested by the military in 1983 and was imprisoned in an Army camp in Butuan City.

Olalia said this “indubitably shows that the necessary fundamental and long-lasting reforms and enduring systemic safeguards for a truly free and democratic society have not been deeply entrenched in our collective consciousness, practice and institutions.”

“It demonstrates that brazen chronic impunity for recurring violations over several decades continues to frustrate our political maturation, despite many significant and well-fought out victories and successful struggles to push back and attain, regain, win and preserve our individual and collective civil, political, social, economic and cultural rights,” he said.

Victims twice over, here are some of the personalities who survived the abuses of the Marcos dictatorship and are going through the same under Duterte: 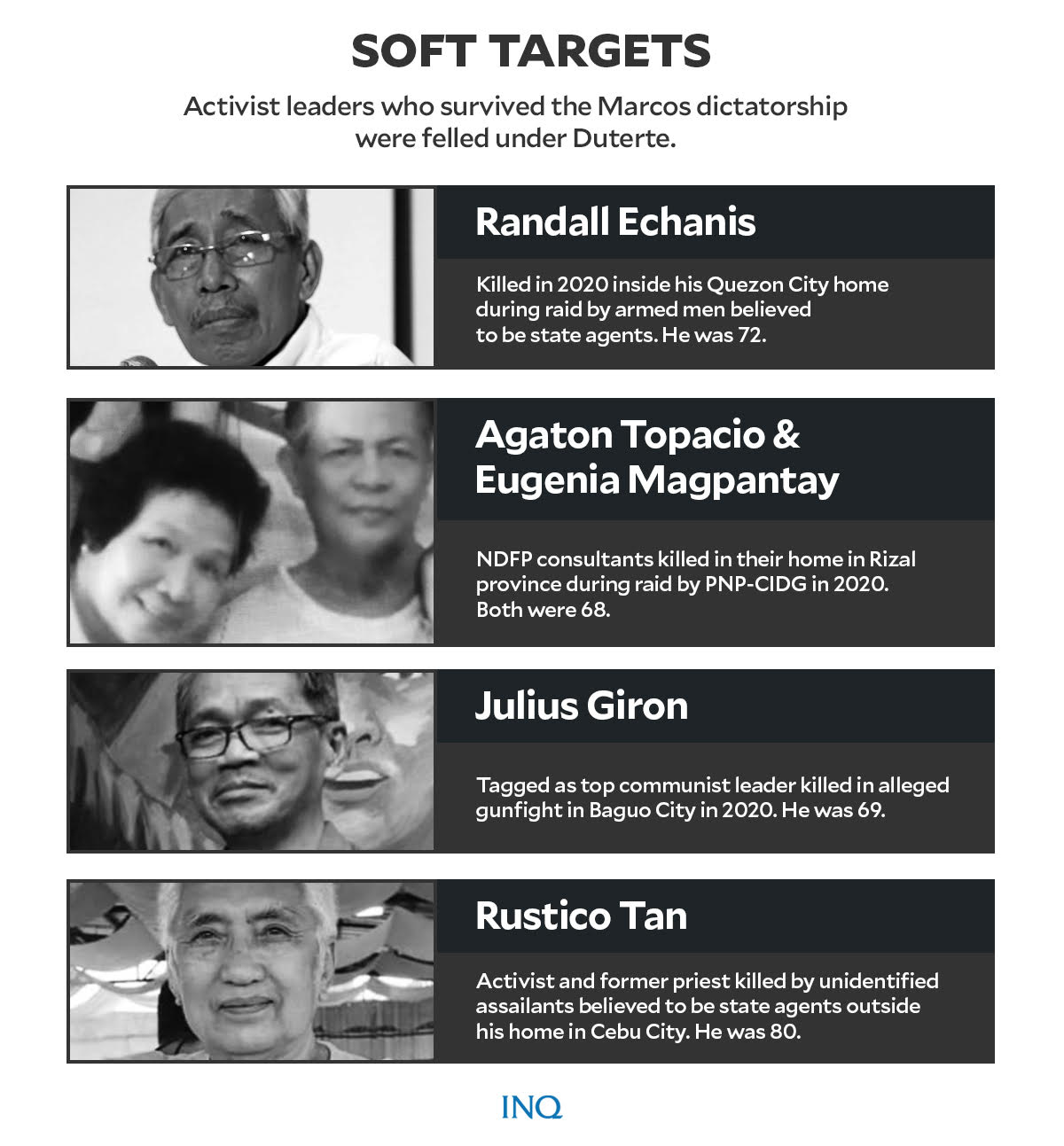 Echanis, a peasant activist recognized for crafting the Genuine Agrarian Reform Bill, was tortured and killed inside his residence in Quezon City in 2020 by armed men believed to be state forces.

Former Anakpawis Rep. Ariel Casilao said Echanis was ill and having medical treatment and was unarmed when police raided his home.

Forensic pathologist Dr. Raquel Fortun said Echanis was killed by a stab to the aorta, not a gunshot wound: “[T]he implications seems to be there that, if literally torture means suffering was inflicted, in this sense, physical suffering.”

In 2020, Topacio and Magpantay were elderly and ailing when they were killed inside their residence in Rizal province as the PNP-Criminal Investigation and Detection Group served search and arrest warrants.

The PNP said the couple resisted arrest and were killed in a gunfight, but the NDFP said such a scenario was not possible. “In their physical condition, they could not have handled the many weapons found on the scene, much less engaged in a firefight,” NDFP said.

Both peace consultants for the NDFP, their killing was condemned as “the most recent in the string of killings and legal persecution.”

Their son, lawyer VJ Topacio, said the killing of his parents was “cold-blooded and brutal.”

In 2020, Giron, allegedly the head of the National Military Commission of the Communist Party of the Philippines (CPP), was killed by the military and police in what the lawmen said was a gunfight in Baguio City.

The PNP and AFP said they were about to serve a warrant of arrest against him, but Giron and two companions resisted arrest, “resulting in a firefight”. The story line is eerily similar to that being used by the government to explain the killing of thousands of men, women and children suspected of involvement in the drug trade. CPP said Giron was struggling from the infirmities of old age, making it difficult for him to keep his balance: “He and his companions in their residence were unarmed and were not in a position to fight back against the armed fascist agents.”

It said that the allegations of the PNP that the arresting team was shot by Giron was a “fabrication to cover up their crime.”

Tan, an activist and a former priest, was killed by unknown assailants last May while sleeping outside his residence in Cebu.

His neighbors said they heard several gunshots and noticed two motorcycle-riding men leaving the area. No one was able to identify Tan’s killers.

In 2017, a case of murder tagged as fabricated that was filed against him for alleged links with New People’s Army (NPA) was dismissed.

A similar case was filed against Tan in 2019, but he was released on cognizance in 2020. A year later, he would be killed while sleeping.

The PNP denied claims that police had been involved in the killing because of Tan’s links with NPA.

Baylosis was a peace consultant of the NDFP who was released from prison in 2016. However, in 2018, he was “forcibly and violently” arrested for alleged possession of firearms and explosives.

He was the first to be arrested after Duterte ended talks between the government and NDFP. In 2019, the Quezon City Regional Trial Court dismissed the cases filed against him after it declared the search and arrest as “illegal”.

On a list from the ATC last April, Baylosis was designated as a terrorist. The Department of Justice (DOJ) tagged him as a terrorist in 2018, but was later cleared by the Manila Regional Trial Court.

They were arrested at a checkpoint established by the PNP after receiving a report that individuals were coming out of a remote area in Talaingod town.

In 2019, Ocampo asked the DOJ to dismiss the cases filed against them, saying that what happened to them was a “clear case of political persecution.”

He said they only took part in a National Solidarity Mission for lumad, indigenous groups based in Mindanao, who were asking for help after children were allegedly forced out of their school by the military and the local anti-communist group Alamara.

In 2018, Casambre, a peace consultant for the NDFP, was arrested with his wife, Corazon, in Cavite, for illegal possession of firearms and explosives, a case described as “ludicrous”.

In arresting him and his wife, the police said they had a warrant of arrest from a Regional Trial Court in Davao Oriental for cases of murder and attempted killing.

The late NDFP head Fidel Agcaoili said in 2018 that the “arresting team planted firearms, ammunition and explosives in the Casambre’s vehicle to ensure their prolonged and unjust detention.”

Casambre was one of the individuals who filed petitions at the Supreme Court to challenge the law which created the ATC, a government office that designated him as a terrorist last April.

Gamara, a peace consultant for NDFP, was arrested in 2019 by the military and police who stormed the residence of retired priest Arturo Joseph Balagat, his longtime friend.

That time, Director General Guillermo Eleazar, chief of the National Capital Region Police Office, said a search warrant had been issued by the Laguna Regional Trial Court for alleged illegal possession of firearms.

Kristina Conti, of NUPL, said the group would contest the cases to prove that “they are all lies”.

In 2018, Silva, a peace consultant for NDFP, was arrested with four companions in Laguna for alleged illegal possession of firearms and explosives.

He was earlier described by the military as the “overall orchestrator of rebel movements in the entire country.” His arrest was made after the police and the military said they would enhance their operations against rebel groups in the Philippines.

His arrest came after the Manila Regional Trial Court ordered the arrest of Silva and couple Benito and Wilma Tiamzon. Last April, Silva was designated by the ATC as a terrorist.

For many people, especially those born in the late 1980s or later, martial law is just a blur. But for people who are reliving its horrors for a second time under Duterte, the nightmare is for real.