No standards under anti-terror law, IRR to determine what acts are terrorism 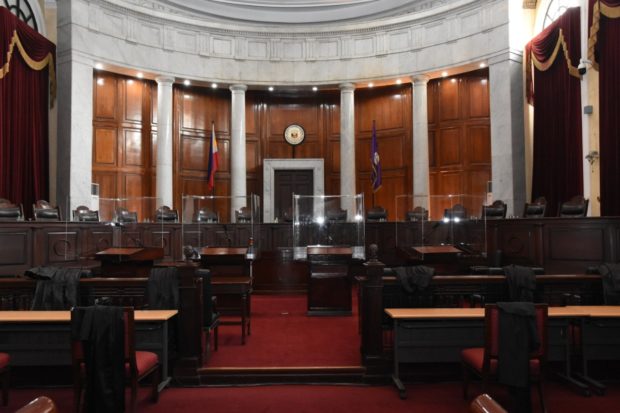 Inside the Supreme Court session hall for the oral argument on the Anti-Terrorism Act. Photos from SC Public Information Office

MANILA, Philippines – Government lawyers on Tuesday admitted that neither the Anti-Terrorism Act nor its Implementing Rules and Regulations (IRR) provide for standards to determine what acts are terrorism.

Section 4 of Republic Act 11479 or the Anti-Terrorism Act of 2020, provides that  terrorism “by its nature and context, is to intimidate the general public or a segment thereof, create an atmosphere or spread a message of fear, or to provoke or influence by intimidation the government or any international organization or seriously destabilize or destroy fundamental, political, economic or social structures of the country…”

When asked about what is the standard for “atmosphere of fear,” “influence by intimidation,” or “provocation” before it can be considered “terrorism,” government lawyers said to rely on the basic rule of statutory construction.

“My problem is the language of the law. It says “create an atmosphere” or spread a message of “fear,” do we have any standard in the law that defined what that means? Do we have something that says blah…blah…blah is equivalent to creating an atmosphere of fear…Is there a standard [in the law or the IRR],” Associate Justice Benjamin Caguioa asked.

He added: “under your recollection, there is none?”

“To provoke or influence by intimidation, there is no standard on what constitutes an act that provokes by intimidation, correct,” Caguioa asked to which Galandines again replied “correct Your Honor.”

Associate Justice Rodil Zalameda asked why did the government not use a modifier the level of “provocation” that can be called terrorism such as the word “serious.”

Assistant Solicitor General Raymund Rigodon said, “it goes into the wisdom of the law.”

“What I fear about is that the phrase ‘provoke the government’ is so vague so as to include any kind of provocation,” Zalameda said.

But Rigodon said, “there is a rule of statutory construction that if the intention is not to give a word or a phrase a technical meaning, it should be interpreted in its ordinary meaning.”

“So, let me ask you what is our ordinary meaning, your understanding of the phrase ‘atmosphere of fear’,” Caguioa asked.

“You can refer to the definition in the Merriam Webster Dictionary,” Rigodon said.