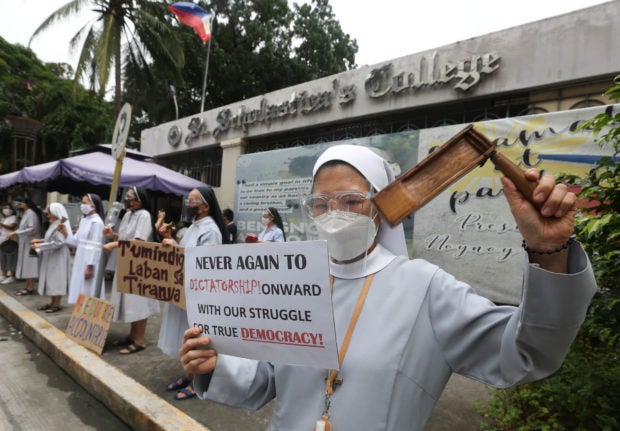 FIGHTING TYRANNY, CORRUPTION Nuns and faculty members of St. Scholastica’s College in Manila stage a noise barrage on the eve of the 49th anniversary of the declaration of martial lawto call on Filipinos to fight tyranny and protest alleged corruption in government amid the pandemic. —MARIANNE BERMUDEZ

MANILA, Philippines — A survivor of the martial law regime of dictator Ferdinand Marcos expressed exasperation over his generation of freedom fighters having to relive the experience of martial law in today’s political milieu.

“I almost cannot comprehend that in the dusk of our lives, we would be brought back to the scenarios of our youth,” former political detainee Bonifacio Ilagan said in Filipino when asked about the commemoration of martial law in the time of President Duterte.

Today marks the 49th anniversary of Marcos’ declaration of martial law, which was actually enforced on Sept. 23, then antedated to Sept. 21 in Proclamation No. 1081.

Ilagan, spokesperson for the Campaign Against the Return of the Marcoses to Malacañang, lamented the return, in Mr. Duterte’s time, of the political conditions during the Marcos era.

“Duterte has implemented in essence and in practice the best practices of martial law,” he said at an online press briefing to mark that dark chapter in modern Philippine history.

He said that even if Mr. Duterte did not declare martial law throughout the country, his presidency was still reminiscent of the Marcos dictatorship as it was marked by extrajudicial killings, curtailment of press freedom and human rights abuses.

“Duterte never hid that he was a fan of Marcos. In fact, we believe that he idolizes him,” Ilagan said. “They are made from the same mold.”

According to the activist, Mr. Duterte and Marcos were both populists who used the military to enforce their will.

On his release in 1976 after two years in detention, his younger sister Rizalina was abducted and never seen again.

She joined the long list of desaparecidos, or those who have disappeared, believed abducted by state agents, during the dictatorship.

Despite that experience, Ilagan has seen, to his dismay, the Marcos family’s persistent attempts to make a political comeback.

Apart from the family’s continuing influence over their local domains—the strongman’s home province of Ilocos Norte and his wife’s home province of Leyte—their children have ventured anew into the national arena, with Ferdinand “Bongbong” Marcos Jr. and Imee Marcos being elected to the Senate in 2010 and 2019, respectively.

The dictator’s son and namesake said he was eyeing a national position in next year’s general elections.

This has led to speculation that he may run alongside Mr. Duterte, who has accepted his party’s nomination as vice presidential candidate, or the President’s daughter, Davao City Mayor Sara Duterte, whose supporters are persuading her to gun for the presidency.

But for the faction of the ruling Partido Demokratiko Pilipino-Lakas ng Bayan (PDP-Laban), aligned with Mr. Duterte, there has been no negotiations for an alliance with Bongbong, who lost by a slim margin to Vice President Leni Robredo in 2016.

There has also been speculation about Mr. Duterte and the Marcoses beginning to go their separate ways, after Mr. Duterte accommodated a longstanding wish of the Marcos family to have its patriarch buried at the Heroes’ Cemetery.

But for veterans of the freedom struggle then, who are again engaged in another struggle against a leader they see as a despot, there is no distinguishing Mr. Duterte from Marcos.

Francis Gealogo, a history professor at Ateneo de Manila University and convener of the activist coalition Tanggol Kasaysayan, sees the political revival of the Marcoses along with the revisionism of history in their favor as being possible only on Mr. Duterte’s watch.

“As citizens, we all have to be involved, especially now that we see the Duterte administration actively taking part in the rehabilitation of the Marcoses, from providing each other with political support … to their parallel authoritarian policies and programs,” Gealogo said.

For Ilagan, the human rights violations and abuse of power being committed today are enough reasons to reject a Duterte-Marcos tandem being floated in the run-up to the 2022 presidential election.

“Six years under Duterte [are] more than enough to say that we have had enough, and that we have to end their rule,” he said.

He added: “We don’t need any more proof that extending the rule of Duterte, who continues to get inspiration from the Marcoses, will be bad for the country.”