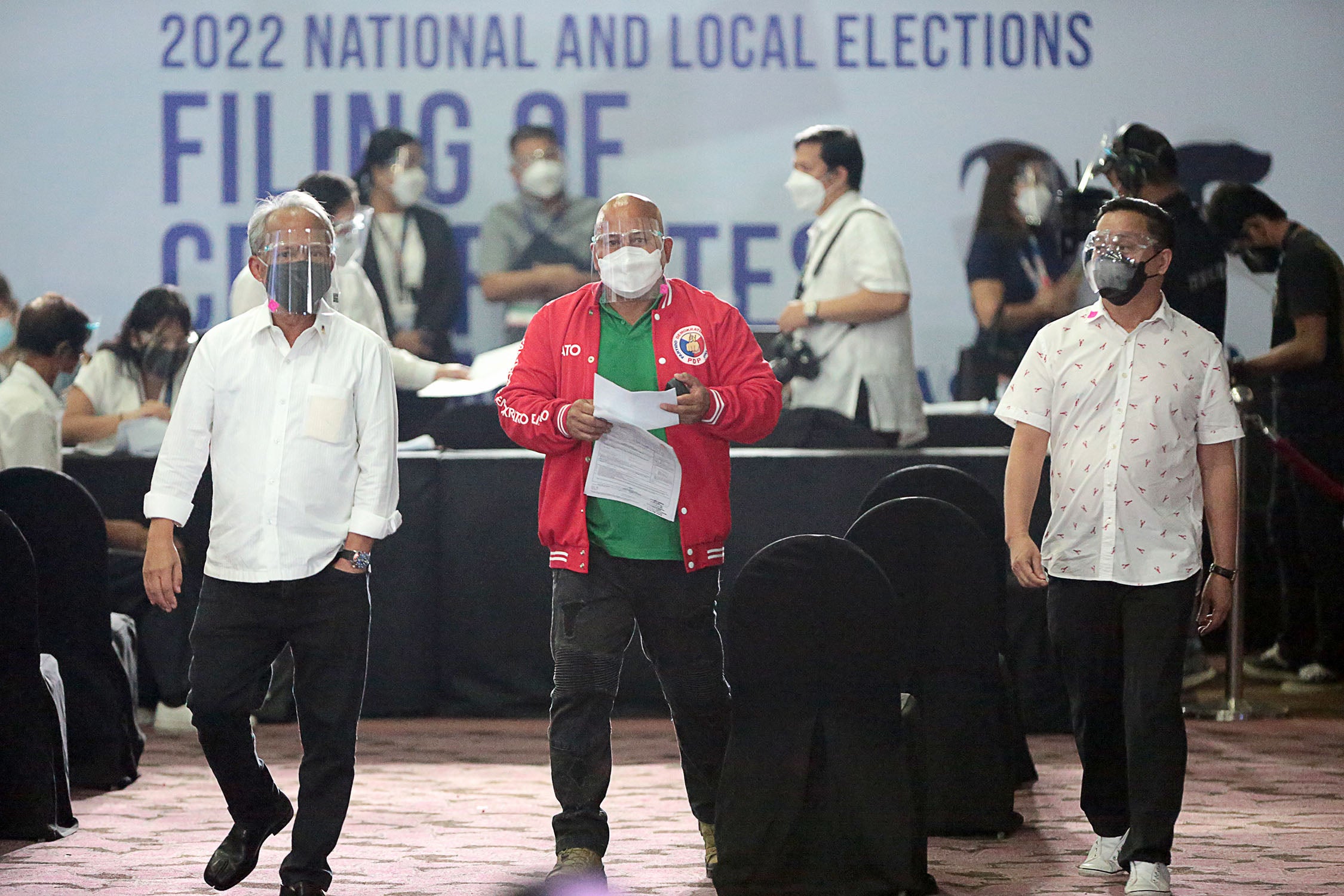 ‘DOI LOOK LIKE A MOCKERY TO YOU?’ Sen. Ronald “Bato” dela Rosa (center) is flanked by PDP-Laban chair Alfonso Cusi (left) and Sen. Francis Tolentino as he files his certificate of candidacy (COC) for president, giving an unexpected twist to the final day of COC submissions at Sofitel Philippine Plaza Hotel in Pasay City on Friday. —GRIG C. MONTEGRANDE

MANILA, Philippines — Speculations on who will be the administration party’s presidential candidate in the 2022 elections took a bizarre turn on Friday with the last-minute appearance of Sen. Ronald “Bato” dela Rosa as its standard-bearer.

The Commission on Elections (Comelec) closed the period for filing certificates of candidacy (COCs) but its rules allow a virtual guessing game to continue until the middle of next month before voters are finally told who are the candidates whose names will appear on the ballots.

This is because under Comelec Resolution No. 10717 issued last August, an aspirant who is a member of a political party may withdraw his or her COC, and be substituted by another member of the same party until Nov. 15.

Dela Rosa himself appeared to encourage such a turn of events when he arrived at the Comelec COC filing center at Sofitel Philippine Plaza Hotel wearing a green shirt with the logo of the mayor’s regional party, Hugpong ng Pagbabago.

And when he was asked whether Sara would be his substitute, he replied: “So much the better. But this is a party decision. This is not my personal decision. If I were to decide, if they allow me to run, I will run.”

Dela Rosa, however, took offense at a question from a reporter who asked whether such a substitution would make a “mockery” of the elections.

“Why? do I look like a mockery to you?” Dela Rosa shot back. “I won as senator. [I placed] No. 5 in the last elections. I was the No. 5 senator. Is that a mockery? Is it a mockery to the 19 million Filipinos who voted for me as senator of this republic? That’s a highly insulting question.”

But the President’s daughter said she would run for a third and final term as Davao mayor. On Friday, she repeated a statement she issued when she filed her COC on Oct. 2, saying she was “honored with the gift of trust and respect of many of our fellow Filipinos.”

Dela Rosa arrived at Sofitel after the President had left, missing the chance to get Duterte to raise his arm, the traditional symbol of endorsement and support.

He was accompanied by Energy Secretary Alfonso Cusi, leader of a faction of the Partido Demokratiko Pilipino-Lakas ng Bayan (PDP-Laban) backed by the President.

“Remember I said I have a secret candidate? He (Dela Rosa) is the one,” Cusi said in a Viber message to the Inquirer.

“Nothing was followed from their national convention. All their nomination processes were useless,” he said in a text message. “Somebody who runs for president on a spur of the moment decision is not a serious candidate.”

The Cusi faction of PDP-Laban had nominated Sen. Bong Go as president and Duterte as vice president.

But in a surprise move, the President announced on Oct. 2 his retirement from politics, and Go filed his COC for vice president.

Dela Rosa told reporters he was not aware of any discussions to have Duterte’s daughter substitute for him.

Whether it is finally Dela Rosa or President Duterte’s daughter, the administration candidate would be facing off with the opposition tandem of Vice President Leni Robredo, who is running as an independent candidate for president, and Sen. Francis Pangilinan, who filed his COC as the Liberal Party (LP) vice presidential candidate on Friday.

Robredo and Pangilinan on Friday declared themselves the “true opposition.”

Speaking to reporters at the Quezon City Reception House, Robredo, who submitted her COC on Thursday, said she had also ditched earlier plans for unity talks among other presidential aspirants.

“I realized yesterday that the Filipino people can stand as one, and they don’t need us politicians to unite. [They need] to be given an alternative where they can dream and hope again for the future,” she said.

Robredo refused to divulge details of her failed unity talks with Pacquio, Sen. Panfilo Lacson and Manila Mayor Francisco “Isko Moreno” Domagoso, saying even those efforts “have a limit.”

“It’s hard to force unity if you don’t align on basic principles,” she said. “It’s clear now we are the true opposition in the sense that, even at the very beginning, we resisted.”

In an emotional speech, Pangilinan, 58, said he was responding to the call of duty by running alongside Robredo “in the middle of the greatest health and economic crisis of our country.”

“I accept this challenge not because I am assured of victory but because of my unwavering beliefs and principles,” he said.

In what could be his first salvo against his rivals, Moreno took a swipe at Robredo’s statement that she was running to prevent the return of the Marcoses to Malacañang.

“Is that the only reason she’s running? What about jobless, hungry Filipinos?” Moreno said in Filipino.

He also criticized Robredo’s allies for urging him to withdraw his candidacy.

“I thought they were rallying for democracy? Don’t I have the right to run, too?” Moreno told reporters and supporters after #WithdrawIsko trended on social media.

“Democracy is practiced by 100 million Filipinos. You cannot talk of unity, when you can’t unite yourself. You’re not even proud of your party,” Moreno said, referring to Robredo’s decision to run as an independent instead of standard-bearer of LP where Robredo serves as party chair.

He said the elections were “bigger than the fight of the children of Marcos and the yellowtards turned pink,” referring to Robredo’s new campaign color.